Stephen Hawking: The most dangerous threats to humans now come from science and technology 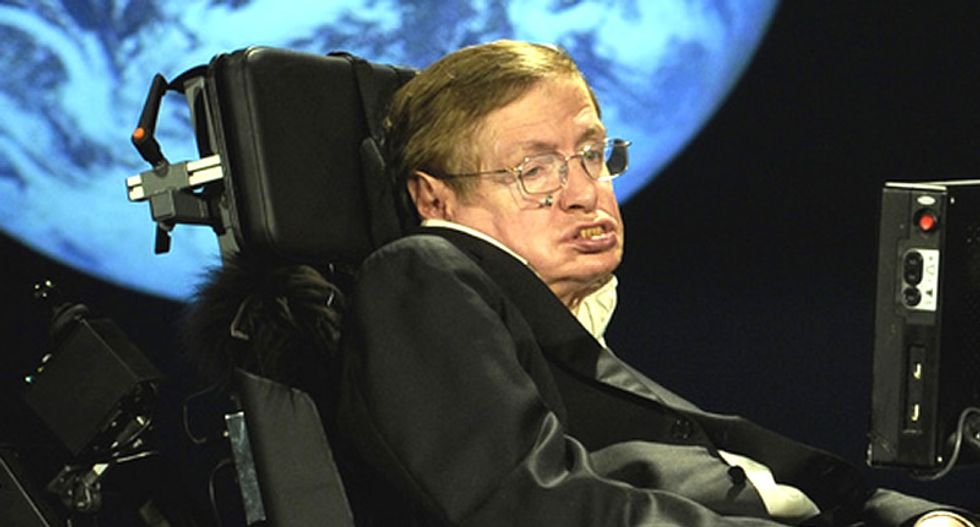 The human race faces one its most dangerous centuries yet as progress in science and technology becomes an ever greater threat to our existence, Stephen Hawking warns.

The chances of disaster on planet Earth will rise to a near certainty in the next one to ten thousand years, the eminent cosmologist said, but it will take more than a century to set up colonies in space where human beings could live on among the stars.

“We will not establish self-sustaining colonies in space for at least the next hundred years, so we have to be very careful in this period,” Hawking said. His comments echo those of Lord Rees, the astronomer royal, who raised his own concerns about the risks of self-annihilation in his 2003 book Our Final Century .

Speaking to the Radio Times ahead of the BBC Reith Lecture, in which he will explain the science of black holes, Hawking said most of the threats humans now face come from advances in science and technology, such as nuclear weapons and genetically engineered viruses.

Related: Stephen Hawking: 'If you feel you are in a black hole, don’t give up. There’s a way out.'

“We are not going to stop making progress, or reverse it, so we must recognise the dangers and control them,” he added.

The Cambridge scientist, who turned 74 earlier this month, said his expectations were reduced to zero when he learned he had a rare and slowly progressing form of motor neurone disease at the age of 21. But reflecting on more than 50 years since the diagnosis, he said he had been very fortunate in almost every other way. In Hawking’s area of theoretical physics, his disability was not a major handicap.

Asked what kept his spirits up, he named his work and sense of humour. “It’s also important not to become angry, no matter how difficult life is, because you can lose all hope if you can’t laugh at yourself and at life in general.”

For thirty years Hawking was Lucasian professor of mathematics, a post once held by Isaac Newton, and one of the most prestigious academic positions in the country. But Hawking said he felt closer to Galileo Galilei, the 16th century astronomer, who overturned the received wisdom of his time with rigorous observations. Given a time machine, Hawking named Galileo as the scientist he would travel back in time to meet.

Hawking was forced to postpone the recording of the Reith Lecture in November due to poor health. But on 7 January, a day before his birthday, he delivered the talk on black holes, and the fate of information that falls inside them, to a 400-strong audience at the Royal Institution (Ri) in Mayfair, London.

Black holes form when stars run out of nuclear fuel and collapse under their own gravity. Previously called “frozen stars”, they became widely known as “black holes” when the phrase was coined in 1967 by the physicist John Wheeler. For some time, the French resisted the change of name on the grounds that it was obscene, but later fell into line, Hawking said.

During the lecture, Hawking asserts that it may be possible to fall into a black hole and emerge in another universe. But he added that it would have to be a large, spinning black hole, and a return trip back to our own universe would not be possible. The lecture will be broadcast in two parts on BBC Radio 4 at 9am on 26th January and 2nd February.

Speaking through his speech synthesizer at the Ri, he answered a question on whether the electronic voice had shaped his personality, perhaps allowing the introvert to become an extrovert. Replying that he had never been called an introvert before, Hawking added: “Just because I spend a lot of time thinking doesn’t mean I don’t like parties and getting into trouble.”