Teen chokes up at town meeting asking Bundy to leave: 'I shouldn't have to be scared in my own hometown' 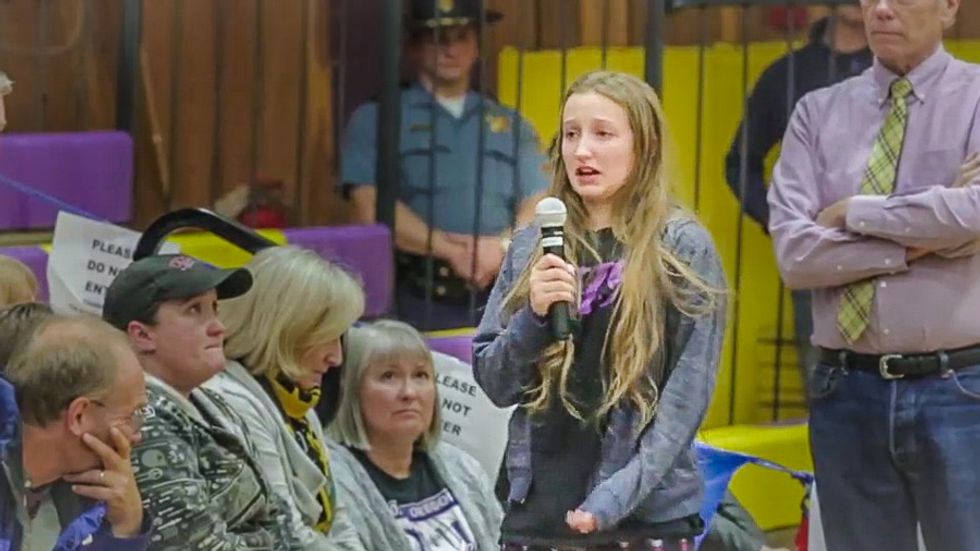 A high school freshman received a standing ovation at a town meeting in Burns, Oregon on Tuesday after she tearfully spoke out about her fear of a militant group led by Ammon Bundy.

Although many residents stepped up to the microphone to express their frustrations during Tuesday's town meeting at the Burns High School gym, it was 15-year-old Ashlie Presley who "stole the show," according to The Oregonian. Presley and her classmates were forced to start one week late this year due to security concerns over militants who staged an armed takeover of the Malheur National Wildlife Refuge.

"I am 15 and I'm a freshman in high school," Presley began, choking up before she could finish her first sentence.

The freshman took a deep breath and continued: "Being here with all this honestly has scared me. And it shouldn't."

READ MORE: Oregon judge plans to bill Ammon Bundy up to $70,000 a day for security costs to county

"I should not have to be scared in my own hometown," Presley said. "I know that all of my friends have been scared and have come to me to know what to do."

The 15-year-old, who is the daughter of a local judge, explained that she tells her friends "everything is going to be okay."