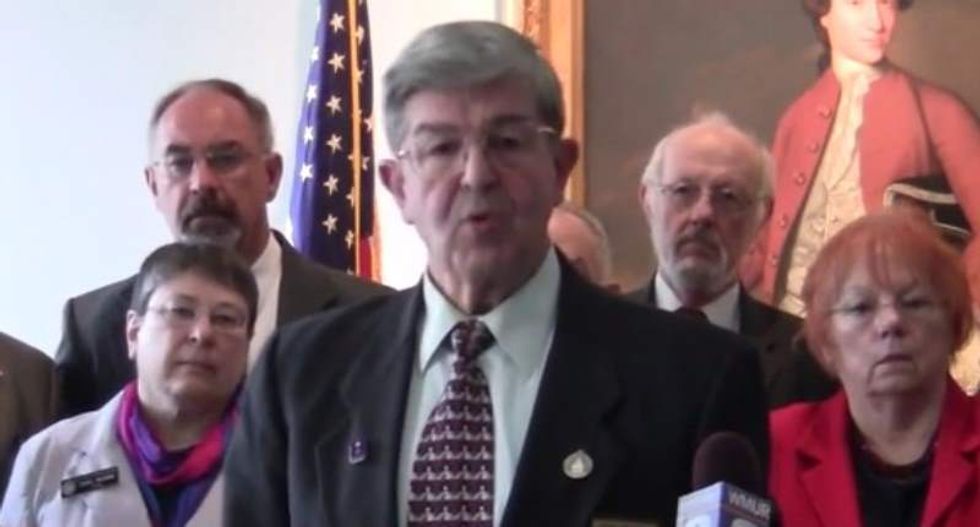 A New Hampshire Republican lawmaker launched into an anti-Muslim rant on Wednesday while defending a bill he said would allow the state to cut terrorists off from state assistance programs, Talking Points Memo reported.

"You may hear from some opposition to this bill, but I must remind you that in the Muslim religion the word 'taqiyya' describes how its adherents are expected to lie to non-believers to advance their cause," State Rep. Ken Weyler (R) said in written testimony submitted to a state House committee. "I say cause rather than religion because this is an ideology posing as a religion. Islam is intolerant and deceitful, and its adherents are ordered to overthrow our way of life and to replace it with 'sharia' law."

Weyler's testimony came on behalf of a bill he co-sponsored barring "any member of a foreign terrorist organization" from being eligible for benefit programs like state-issued health insurance, public assistance, or "food stamps."

In his remarks, though, Weyler went so far as to argue that "giving public benefits to any person or family that practices Islam is aiding and abetting the enemy. That is treason."

The lawmaker argued that Muslim "fanatics" were responsible for every terrorist attack of the past 20 years, and referenced the Boston Marathon attack of 2013, saying that one of the culprits "put his wife on public benefits."

"If he had to support his family, he might have had more devotion to his job and not to bomb buildings and radicalizing his brother," Weyler wrote.

"The outrageous claims made by Representative Weyler, including the false statement that ‘all terrorist attacks’ in the United States have been carried out by Muslims, could be the most outrageous, intolerant, hateful rhetoric that I have heard in over 12 years as a legislator," House Democrat Leader Steve Shurtleff said in a statement.