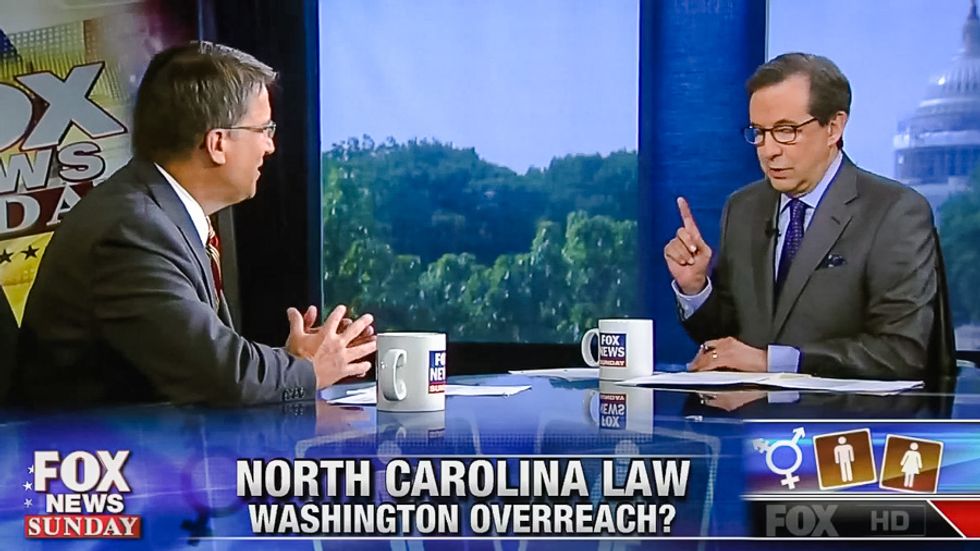 North Carolina Gov. Pat McCrory (R) was forced to admit over the weekend that he was not aware of a single instance of transgender people molesting children in bathrooms -- even though he continues to defend the state's discriminatory bathroom law.

During an interview with Fox News host Chris Wallace, McCrory complained that the Department of Justice had not given him enough time to respond to accusations that the state violated civil rights laws by passing a law that forces transgender people to use the bathroom corresponding to the sex on their birth certificate.

"We don't think three working days is enough to respond to such a threat," McCrory insisted. "It's the federal government being a bully, it's making law, and it's their interpretation."

"Now the federal government is going to tell almost every private sector company in the United States who can and who cannot come into their bathrooms, their restrooms, their shower facilities," he complained. "They are now telling every university that accepts federal funding that boys who may think they're a girl can go into a girl's locker room or restroom or shower facility."

Wallace wondered if McCrory would consider it "government overreach" for the Department of Justice to admonish the state if blacks and whites were segregated into different bathrooms.

"But we can definitely define the race of people," the governor opined. "It's very hard to define transgender or gender identity."

"How many cases have you had in North Carolina in the last year where people have been convicted of using transgender protections to commit crimes in bathrooms?" Wallace asked.

"Have there been any cases of this?" Wallace pressed.

"Not that I'm aware of," McCrory admitted.

"Have there been any cases in the last five years?" the Fox News host wondered. "Why not just then let it go if there's not a case of transgender people going in a molesting little girls?"

"When you go into a restroom or your wife goes into a restroom you assume the only other people going into that restroom or shower facility is going to be a person of the same gender," McCrory said. "That's been an expectation of privacy that all of us have had for years."

"If there's no problem then why pass the law in the first place?" Wallace hammered.

"There can be a problem," McCrory fired back. "Because the liberal Democrats are the ones pushing for bathroom laws."

"I'm not interested in that," he added. "We did not start this on the right. Who started it was the political left."

Watch the video below from Fox New Sunday, broadcast May 8, 2016.