Freddie Gray is one of many: how dying in custody is much more common than you think 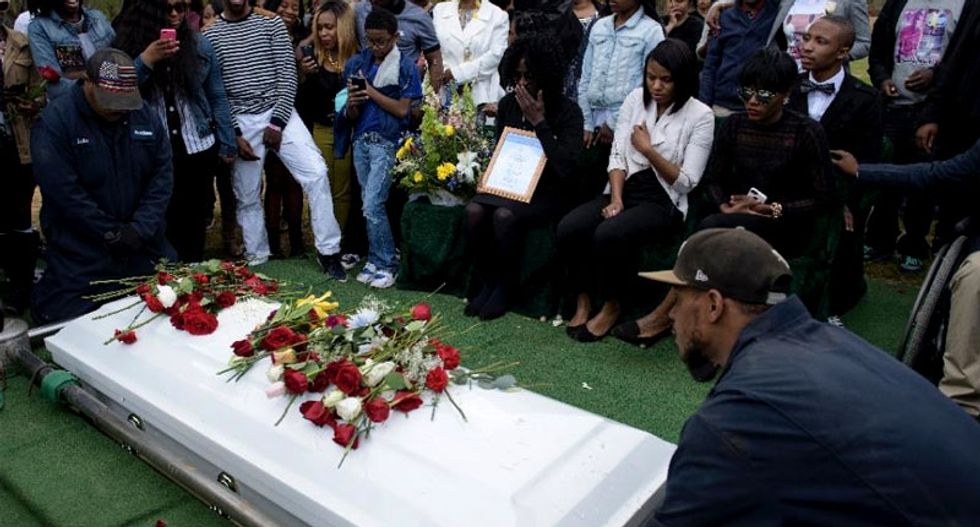 (from Citizen: An American Lyric by Claudia Rankine)

By now, the details of Freddie Gray's lonely ride in the back of a police van have been burnished onto our collective memories. Freddie Gray was handcuffed, shackled, and left on his stomach in the back of the van. Nothing belted him to a seat or bed. When the driver stopped the van and took corners, Gray's body was tossed around. Despite Gray's moans for help, none came. When he was transported to the hospital -- non-responsive and not breathing -- he was resuscitated, but died a week later. The autopsy revealed that Gray's spine had been "transected," meaning it had been severed.

Those of us who were mesmerized by the horrors of Baltimore revealed in the HBO series, The Wire, wondered if it were possible that this television city might exist in real life. Certainly the protests of prominent Baltimoreans were loud in their condemnation of David Simon (the showrunner) and his vision of the town where he had been a crime reporter for the Baltimore Sun. They insisted that Baltimore was a city of museums, of a lovely waterfront walk, and a view of American history.

Turns out, that like most things in 2016 America, Baltimore is a fragmented city where its poor, mostly black citizens, are treated like rabid dogs by a police department full of bullies and miscreants. In September, 2014, the Baltimore Sun published the results of its investigation of police brutality. "Undue Force" detailed how the city of Baltimore had paid out $5.7 million between 2011 and 2014 in settlements awarded to victims of police brutality. The settlements would have totaled much, much more but a tort reform had limited damages to a maximum of $200,000 per complaint. Still, that money "would cover the cost of a state-of-the-art rec center or renovations at more than 30 playgrounds. And that doesn't count the $5.8 million spent by the city on legal fees to defend these claims brought against police," according to the Sun.

And in case the assumption is that most of the victims of police brutality would be young black men around Freddie Gray's age, the details of the Sun's investigation revealed a sickening panoply of victims whose major "crime" had been catching the eye of a police officer who treated all the residents of certain neighborhoods as suspicious.

Over the past four years, more than  100 people have won court judgments or settlements related to allegations of brutality and civil rights violations. Victims include a 15-year-old boy riding a dirt bike, a 26-year-old pregnant accountant who had witnessed a beating, a 50-year-old woman selling raffle tickets, a 65-year-old church deacon rolling a cigarette and an 87-year-old grandmother aiding her wounded grandson.

In the case of the 87-year old, police threw her to the ground and broke her shoulder. She had called the police to report that her grandson had been shot. When police arrived, they told the boy that they wouldn't take him to the hospital until he told them who in his house had shot him. When the grandmother insisted that the boy had run into the house shot, and that his assailants were outside, she was thrown against a wall and fell to the ground.

"Bitch, you ain't no better than any of the other old black bitches I have locked up," the 87-year-old victim was told as she was laying on the ground. The officer taunted her while he stood over her, then put his knees in her back as he pulled her arms behind her back to slap cuffs on her.

But "dying in custody" is not a series of incidents for which only Baltimore has become infamous. The notoriety of having police forces who cannot be trusted to arrest a suspect and transport a person to a processing center should be shared across the country. While it is difficult to find these numbers in an American paper, the Guardian (UK) has been keeping track of the number of people killed by the police at a project called "The Counted."  Since January 1, 2015, 57 people have died "in police custody." The most recent of these deaths was in late May, when a 64-year-old man was Tasered twice and pepper sprayed while being subdued by police in Tulsa.

Marshall, a homeless African American, was arrested on November 5, 2015 for trespassing and disturbing the peace. Marshall was known to have mental health issues, and the community leaders who protested Marshall's death implicated Denver police racism as an issue. Marshall died after asphyxiating on his own vomit inside a mask that had been placed on his head to prevent him spitting on officers. His death is still under investigation.

Two Tulalip reservation police officers and a Snohomish County sheriff's deputy responded to reports that Lacy was "walking on a road" inside the Tulalip Indian reservation. Lacy was Native American.  While attempting to take Lacy into "protective custody" to get him off the road, officers report that Lacy began fighting with them as they were trying to get him into a police car. "During the scuffle, the man became unresponsive," the Seattle Times reported. The incident remains under investigation.

Goode, a white man who was on his way to a rock concert with his wife, was approached by police for "acting rowdy." His wife had taken Goode to a parking lot to get him to chill out after Goode had dropped a hit of acid, but police responded because of a report from a caller. Police hog-tied Goode in the parking lot for over an hour and left him lying on his stomach. The pressure of the position caused his heart to go into tachycardia and he died. Police allege that the acid killed Goode; Goode's family argue that the autopsy proves that it was the stress position that killed him. The case is still under investigation.

Jonathan Paul was a black man who was arrested when police responded to reports that a man was throwing things out of a window. He had prior warrants, so he was taken into custody. Three days later, he died in his cell. An autopsy revealed that he had been restrained and pepper sprayed. A grand jury has handed down an indictment of criminally negligent homicide against two jailers, one of whom had subsequently retired after Paul's death.

A black male with a known history of seizures, Smart died in a jail cell after being restrained during a "medical emergency." The autopsy showed that the restraints had exacerbated Smart's condition, and his mother wrote an article for the Guardian in which she recounted Smart's medical history, and that his need for medication had been ignored by the staff of the private prison where he was being held. The death was ruled "an accident" due to natural causes. No charges were brought.

Video tape of the 22-year old African American shows Ajibade being Tasered in the groin while in a restraint chair. He had been arrested during a bi-polar episode after he broke his girlfriend's nose. After being shocked and having a spit mask put on his head, Ajibade was found dead in his cell a few hours later. Nine deputies were fired over his death and two of them were indicted for manslaughter. The two deputies were acquitted of manslaughter but were convicted of lesser charges.

Nelson died in a hospital where the African American man had been brought for evaluation of mental health issues. Nelson resisted being evaluated by medics. The police officer called to assist them Tasered Nelson. Nelson was Tasered multiple times, and images from the incident show him bleeding from the wounds in his back from the Taser probes. Nelson died in his mother's company, and the transcript of the event shows that the officer kept telling Nelson's mother that her son had to be shocked. Nelson died at the scene. It is still under investigation.

Robinson was arrested for failure to pay child support. When jailers entered the black man's cell after he threw things around, he was restrained after "trying to escape." Robinson stopped breathing while being restrained. The case is still under investigation.

These seven victims reflect the spectrum of recent cases of those who died in police custody. One of the common features in reading through the reports, which are all available at the data bank, "The Counted," is that restraint positions and the use of Tasers is often implicated in prisoners' deaths. In combination with the horror report issued by the Baltimore Sun, which demonstrates the number of people that Baltimore police have been held liable for brutalizing -- and the fact that many of the Baltimoreans were witnesses to crimes who were subsequently arrested by officers -- it is more than likely that sometime in the past 18 months, an innocent person has died being arrested for a crime he did not commit. Even in some of the cases discussed above, it is apparent that being poor, alone, or mentally ill gives police license to treat one's very presence as a provocation that requires the police to intervene. For those who resisted, the Taser and stress positions made protesting one's innocence a capital offense.