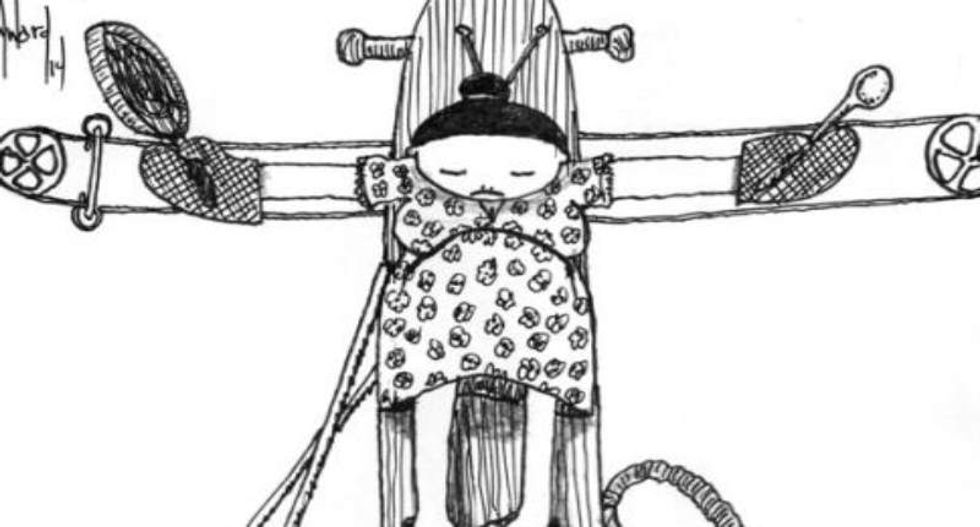 Do you expect your husband to help with household chores? If you do, you won’t have a happy marriage according to an ultra-conservative Christian editor at the Quiverfull blog, Ladies Against Feminism. Lori Alexander recently posted this photo of a handwritten note on her Facebook page, “Always Learning.” 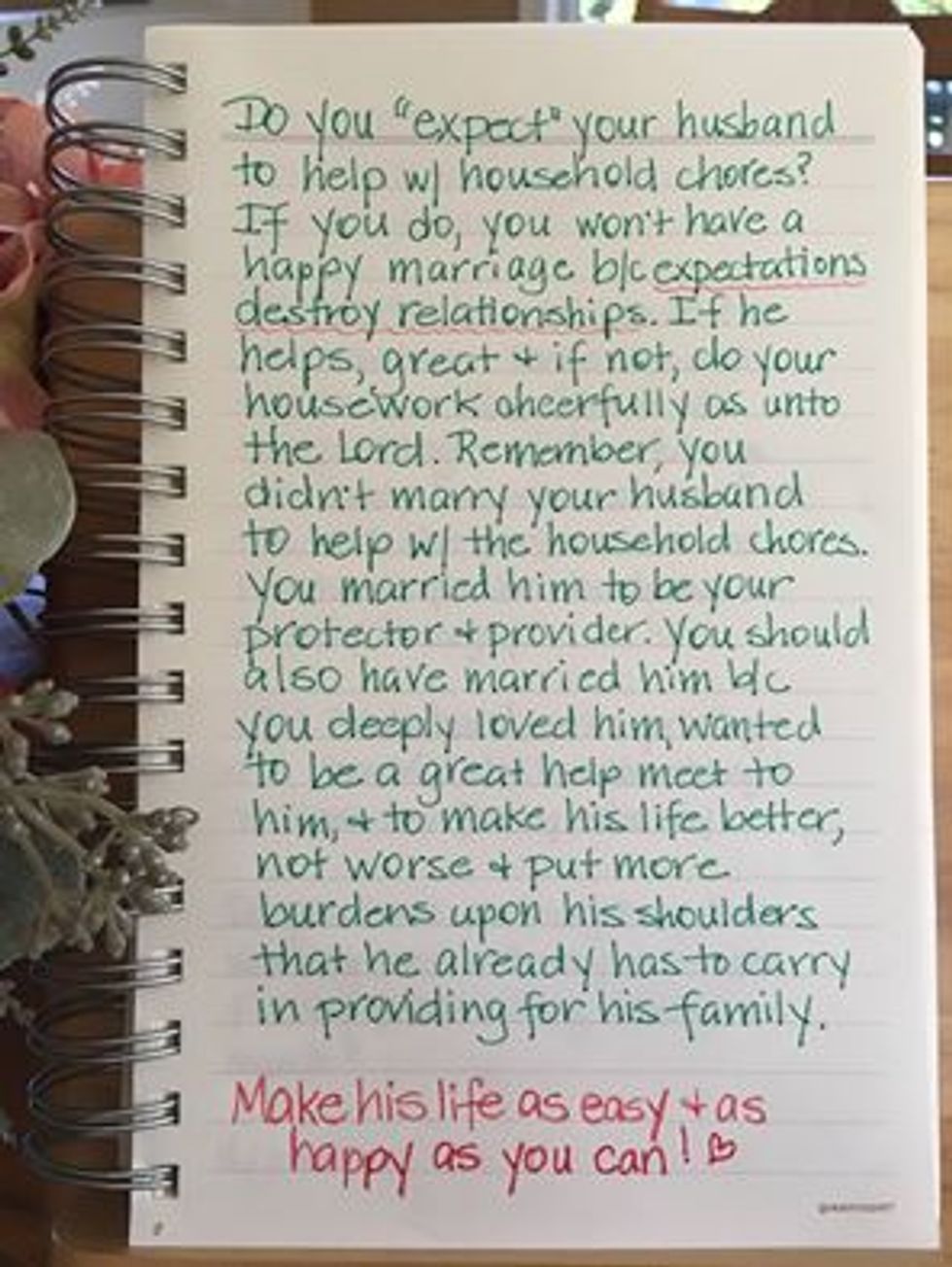 “... you won’t have a happy marriage because expectations destroy relationships. If he helps, great, and if not, do your housework cheerfully as unto the Lord.”

Lori is a Titus 2 woman: an older Christian mentor who’s “calling” is to teach the younger women to be good, obedient housewives and prolific babymakers for Jesus.

“Remember,” she wrote, “you didn’t marry your husband to help with the household chores. You married him to be your protector and provider. .... Make his life as easy and as happy as you can.”

Lori’s post quickly garnered almost 70,000 shares … and not because Facebook users “liked” her quaint proposal for a happy Christian marriage.

“Yes, I had a post go viral. It didn't go viral because the women loved what I said in the post. It was because they hated it and it made them angry. One woman even told me to remove it since it was so evil,” she wrote on her personal blog, Always Learning. “Just sixty years ago, I could write this same post and it would be received as normal living for women.”

While it’s true that Lori Alexander’s post contains nothing earth-shattering - it’s merely the standard formula for “biblical marriage” which is preached regularly from the pulpit in Evangelical Christian churches everywhere - it is promisingly remarkable that the majority of readers, women and men, Christian and secular alike, are not buying it.

The post has received nearly 7,000 comments so far … almost all of them express disagreement and even outrage, like this one by Liz Harms: 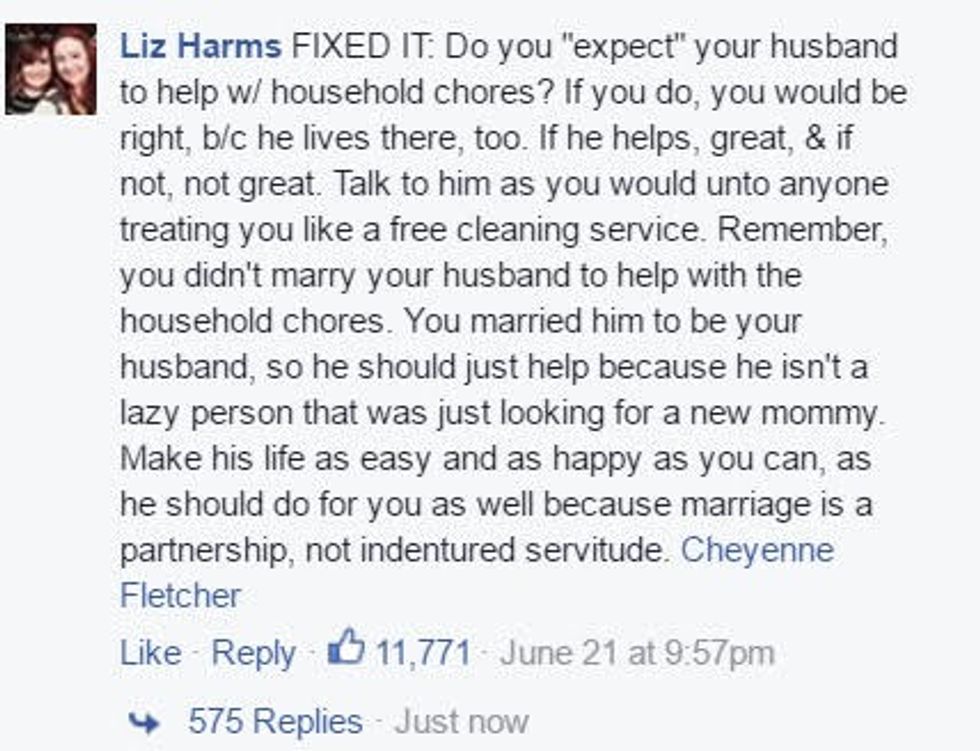 FIXED IT: Do you "expect" your husband to help w/ household chores? If you do, you would be right, b/c he lives there, too. If he helps, great, & if not, not great. Talk to him as you would unto anyone treating you like a free cleaning service. Remember, you didn't marry your husband to help with the household chores. You married him to be your husband, so he should just help because he isn't a lazy person that was just looking for a new mommy. Make his life as easy and as happy as you can, as he should do for you as well because marriage is a partnership, not indentured servitude.

Lori blames the backlash on the evil, career- and birth control-pushing feminists.

“I fault the feminist movement for all of the children being raised by strangers instead of their mothers, plus all of the divorces that have been perpetuated upon marriages, the confusion of roles in marriage, and the extreme wing that wants to see no differences between men and women.”

Without pausing to seriously consider all the negative feedback in those thousands of comments, Lori doubled down with several new posts which are even more cringe-worthy.

In her post, “Rejecting the Lord’s Blessing,” about the wickedness of birth control, Lori writes:

[W]e were having a discussion about this in the chat room and one woman who is pregnant with her tenth baby wrote this to a woman who is struggling with the concept of not using birth control, "God uses struggles to shape our character. God has used the struggles of pregnancy and the demands of mothering a large crew to shape and mold me. It has changed my entire life and what I value. I think today so many of us want an 'easy' life free from pain, suffering, and inconvenience. I know where you're coming from. I spent many years there myself." As believers in the living God, we know we walk on a narrow road that leads to eternal life. We are asked to deny ourselves and be living sacrifices for Him.

Apparently it’s the duty of a Christian woman to make her husband’s life as easy and happy as she can, but if she wants to obtain eternal life, she must endure pain, suffering, and inconvenience, and make herself a living martyr.

And then there’s this: 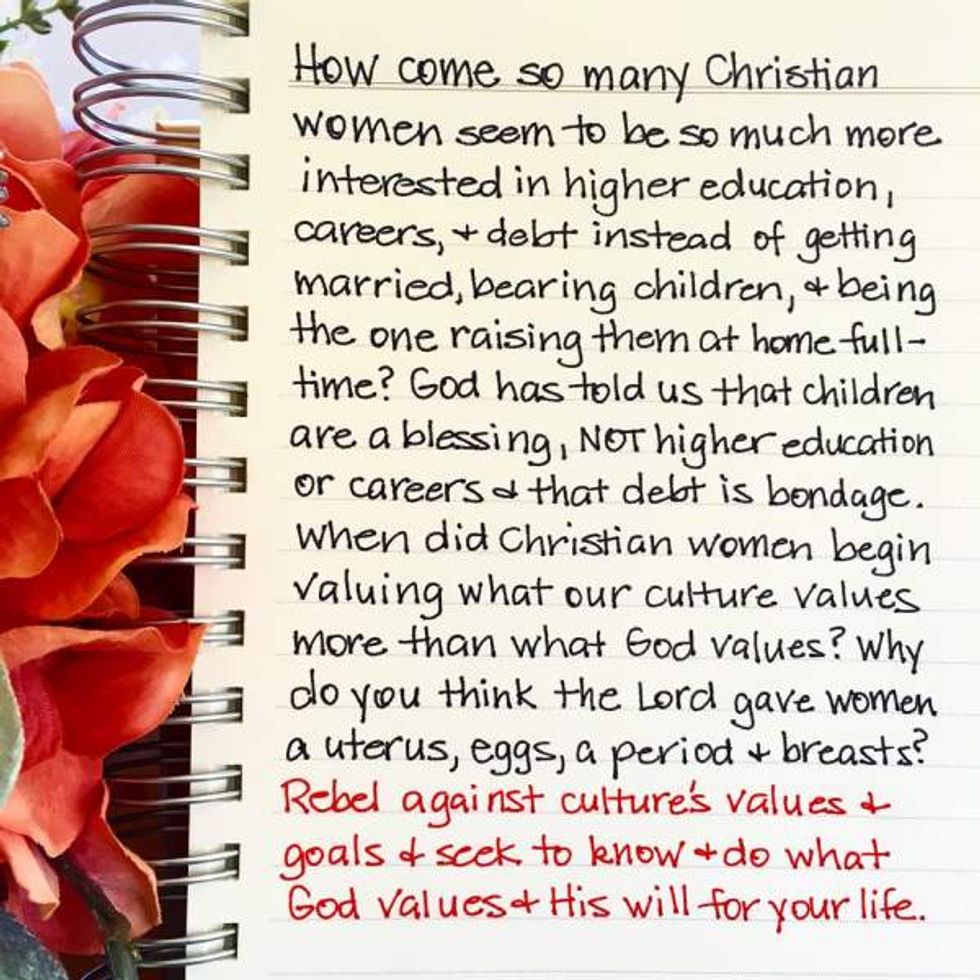 “Why do you think the Lord gave women a uterus, eggs, a period & breasts?” ... not for higher education and careers, but for getting married and bearing children.

Lori Alexander insists that Christian women are superhuman enough to cheerfully do all the household chores, endure pain, suffering, inconvenience, and martyrdom while also being unlimited breeders … but then she follows up with yet another post titled, Women Are More Delicate:

We are the weaker vessel because we are more frail and delicate. Therefore, man is our head, to give us strength and guidance. We as mothers find our greatest fulfillment as we serve God in our God-designated role in God's order. It is God's design.

God endowed a woman with a more tender, emotional nature. She feels insufficient when alone and fears the unknown. Peer opinions sway her more easily. She craves love and attention. This makeup suits a mother for the more protected role of being a keeper at home.

Yeah, that one didn’t go over too well with Facebook readers either. But Lori remains undaunted … in Truly True Believer™ fashion, she sees all the criticism as evidence that she is RIGHT:

I have been viciously attacked since I began blogging. This should come as no surprise to any of you. The world HATES God's ways. I LOVE His ways and will teach them to whoever will listen as long as the Lord allows me to do this.

Lori can take the heat because God “has her back” … but her “protector and provider,” Ken Alexander, felt obliged to clarify and defend his wife with these words:

The way to win the heart of your man, and possibly get more help around the home is by loving and pleasing him. In this way, he will in turn desire to love and please his wife, unless he still needs to grow up, or does not have a giving heart. It's God's prescription for winning your disobedient man. And even if he is never won to more housekeeping, you can still have a great relationship doing things God's ways and accepting him for who he is, with a focus on his strengths and what he brings to the relationship, not the missing tiles or glass half empty.

Um ... where do you even begin to respond? Facebook commenter, Sarah Kirby gets straight to the heart of the matter:

Lori, if you’re reading this ... check out No Longer Quivering. We will happily welcome you to our support group of women escaping and healing from spiritual abuse.