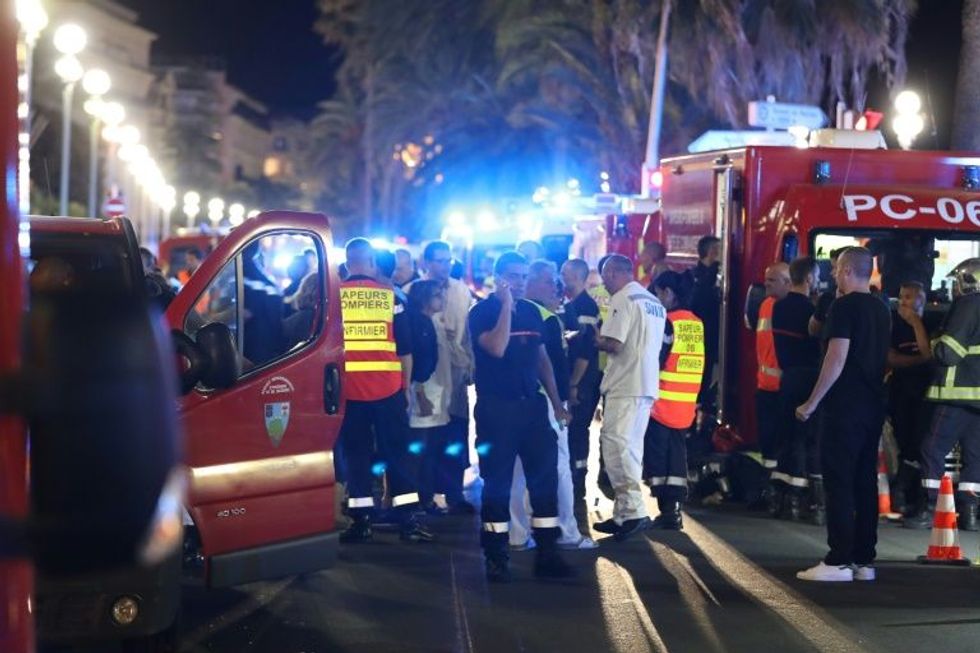 A gunman smashed a truck into a crowd of revellers celebrating Bastille Day in the French Riviera city of Nice, killing at least 84 people in what President Francois Hollande on Friday called a "terrorist" attack.

Hollande declared three days of mourning after the assault, as the shellshocked country found itself again mourning its dead after attacks on Charlie Hebdo magazine in January 2015 and the November 2015 massacre in Paris.

"France was struck on its national day ... the symbol of freedom," said Hollande in a sombre televised address in the early hours of Friday morning.

The attack was of an "undeniable terrorist nature", he said, confirming that several children were among the dead.

The gun-toting driver ploughed the 19-tonne truck at high speed two kilometres (1.3 miles) through a crowd that had been enjoying a fireworks display on France's July 14 national holiday.

In a video viewed over 4,500 times on Facebook, a trembling witness, Tarubi Wahid Mosta, recounted the horror on the promenade.

"I almost stepped on a corpse, it was horrible. It looked like a battlefield," he said.

He took photographs of an abandoned doll and pushchair and described the sense of helplessness faced with the carnage.

"All these bodies and their families ... they spent hours on the ground holding the cold hands of bodies dismembered by the truck. You can't even speak to them or comfort them," he said.

Authorities identified the driver as a 31-year-old French-Tunisian citizen and said he had fired a gun several times before police shot him dead.

Police sources said he had been formally identified from papers found in the truck and was known to the authorities.

Interior ministry spokesman Pierre-Henry Brandet said 84 people were killed and scores injured in the carnage, including 18 in "critical condition".

The attack targeted Bastille Day, the day that commemorates the start of the French Revolution.

It is a celebration of everything France holds dear -- its secular republic and the values of "Liberte, Egalite, Fraternite" (Freedom, Equality, Fraternity).

Earlier Thursday, thousands of people had gathered in Paris to watch the traditional Bastille Day military parade and fireworks displays were held across France.

"We saw people hit and bits of debris flying around. I had to protect my face from flying debris," he said.

Another witness named Nader told BFM television he had seen the whole attack from start to finish, and had initially thought the driver had "lost control".

"He stopped just in front of me after he (crushed) a lot of people. I saw a guy in the street, we were trying to speak to the driver to get him to stop.

"He looked nervous. There was a girl under the car, he smashed her. The guy next to me pulled her out," he said in broken English.

Nader said he saw the driver pull out a gun and start shooting at police.

"They killed him and his head was out the window."

Forensic police were already swarming the promenade as the sun rose over the picturesque bay, which has drawn sun-seekers and the jet-set since the 19th century.

The truck was still in the position where it had ground to a halt, its front badly damaged and riddled with bullet holes and its tyres burst.

A police source said the vehicle had been rented in the region "a few days ago".

A source close to the investigation said an "inactive" grenade was found inside the truck, as well as "several fake rifles".

While officials made an urgent call for blood donors, dozens took to Twitter with desperate pleas for news of loved ones.

Pictures of a young girl with braces or a teenager pulling a funny face were among those posted.

World leaders rushed to condemn the bloodshed, with US President Barack Obama blasting "what appears to be a horrific terrorist attack".

The attack was the third major strike against France in less than 18 months and prosecutors said anti-terrorist investigators were handling the probe.

Hollande announced he would extend France's state of emergency for three months in the wake of this latest attack and "step up" the government's action against Islamic State targets in Syria and Iraq.

"We will continue striking those who attack us on our own soil," he said.

He also called up army reservists to bolster security services that are stretched to the limit.

France has been under a state of emergency ever since the November 13 Paris carnage, which came after 17 were killed in another attack in January at various sites including the offices of the Charlie Hebdo magazine and a Jewish supermarket.

Prime Minister Manuel Valls said Friday the state of emergency would now be extended until October.

IS has repeatedly singled out France as a prime target for its military action against the group in Iraq and Syria, and hundreds of jihadists have left France to fight in its ranks.

Over the past week, France had been breathing a sigh of relief after successfully hosting the month-long Euro 2016 football championship, which passed off without incident despite fears of attacks.

The tournament brought an all-too-brief burst of joy to a gloomy France, bogged down after the two attacks in 2015, violent anti-government protests, strikes and floods.