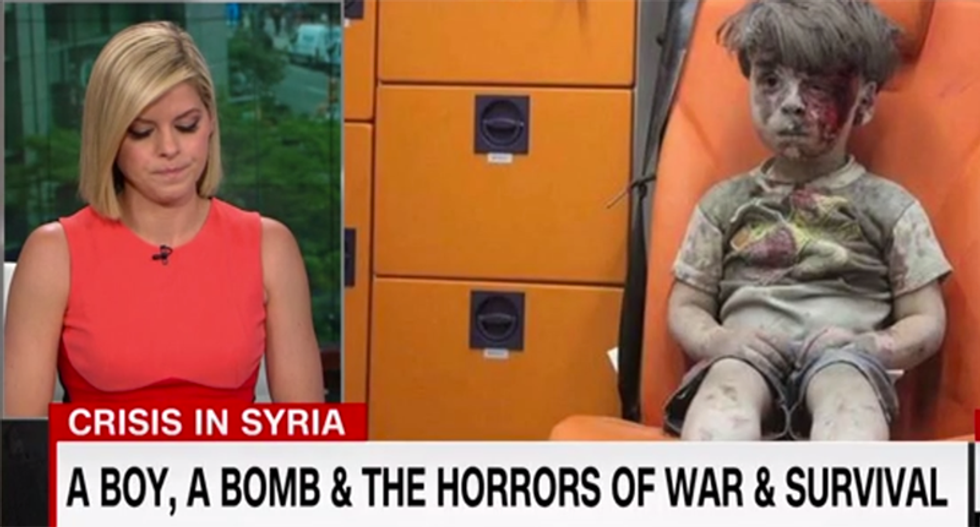 CNN anchor Kate Bolduan took deep breaths as her voice wavered as she read the recent story about a 5-year-old Syrian boy covered in debris, dirt and blood that went viral Thursday.

The boy was in an ambulance after being injured in airstrikes on rebel-held districts in the war-torn country. Bolduan remarked that in many places in the world a 5-year-old would be getting ready to start school for the first time, while this young child was just trying to stay alive.

"They're dying, they're surviving and many, somewhere in between," Bolduan said, shaking her head and holding back tears. "According to activists, this is Omran," she said as her voice quivered and she cleared her throat looking down.

She paused, took a deep breath, looked at the teleprompter and continued to read the harrowing tale of survival for the tiny child. "He lives with his mom, his dad and his brother and sister. Their home is inside Aleppo, Syria. It was hit by a bomb. An air strike. Who's behind it, we do not know. He and his family were pulled alive from what is left of their home after being buried in the rubble."

CNN rolled footage of the boy being carried by first responders into the ambulance. He sat on a gurney looking at his arms covered in dust and dirt. "Omran is left inside that ambulance alone, bloodied, as rescuers go back into the rubble looking for anyone else who may have survived," she continued. "His family did."

“What strikes me is we shed tears, but there are no tears here. He doesn't cry once. That little boy is in total shock. He's stunned,” she said through tears. “He’s inside his home one moment and the next he’s lost in the fury of war and chaos.”

Bolduan isn't the first reporter who has been forced to cover difficult stories this year. Journalists were allowed into the Pulse nightclub after the shooting before bodies had even been removed. One local journalist posted on his personal Facebook page that all they could hear were haunting sounds of cell phones ringing from loved ones looking for their friends, hoping they were still alive.

"He's alive, we wanted you to know," Bolduan closed.