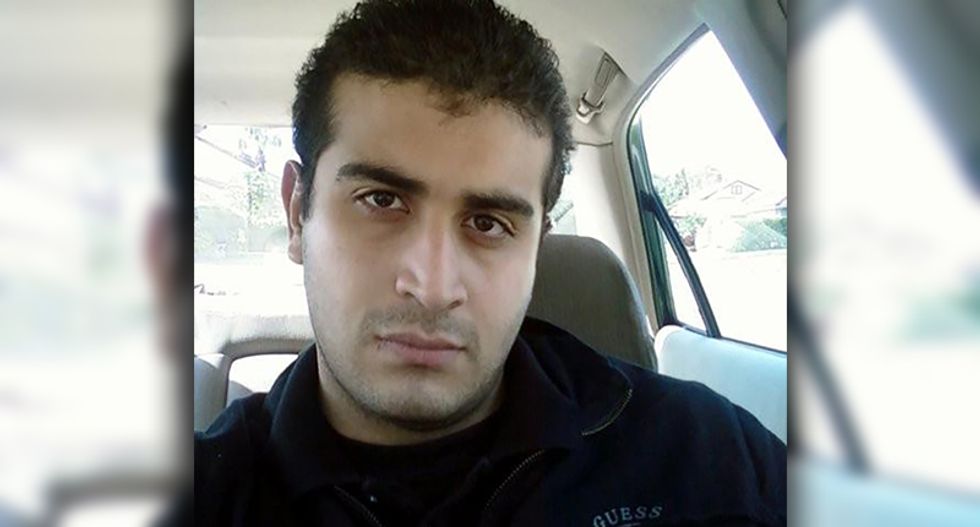 Islamophobic workplace intimidation figures into the background of another mass shooter conveniently painted as a jihadist.

The ongoing intrigue surrounding Omar Mateen and his massacre of 47 patrons of the Pulse Nightclub in Orlando, Florida was drowned out by the political circus of two party conventions this month. The personal details about Mateen, from his vicious abuse of his first wife to credible accounts of a secret gay life to the reports of his mental instability and the autopsy results confirming him as a heavy abuser of steroids, have been forgotten or apparently suppressed by the FBI. Taken together, these elements of Mateen's person profile directly contradicted the popular portrayal of the mass killer as an Islamic extremist acting in the name of ISIS. Unsurprisingly, they have fallen down the Orwellian memory hole.

As the facts that could have interrupted the official narrative fell by the wayside, Congress and state legislatures exploited the tragedy to push for an expansion of undemocratic databases of “terror” suspects and the discriminatory no-fly list. As Sarah Lazare reported for AlterNet, police departments across the country have been leveraging the attack to lobby for expanded arsenals of military gear. At both Republican and Democratic conventions, Orlando has been invoked to summon fears of Islamic extremism at home and to gin up support for military action abroad. Meanwhile, new information continued to surface that complicated the simplistic war on terror narrative even further.

On July 18, the St. Lucie County Sheriff’s Department where Mateen once interned and which later oversaw his security clearance as a private security guard working at the county courthouse released a series of records detailing its interactions with Mateen. Publicized over a month after the Orlando massacre and while Republicans were gathering for their national convention, the documents were buried by the national media, receiving only scant coverage and generating negligible public discussion. Yet they revealed explosive new details about the killer that may shed light on his motives and further expose the destructive culture of racism infecting police departments across the country.

The documents feature complaints Mateen filed with the St. Lucie County Sheriff’s Department in which he recounted vicious and sustained racial harassment by deputies serving at the courthouse where he worked.

Here are just a few of the incidents Mateen alleged:

As the storm of alleged racial harassment intensified, Mateen erupted at the deputies and his co-workers, triggering an interview by the FBI. According to notes by Michael Hogsten, the deputy general counsel for G4S, Mateen admitted that he had made outrageous claims of loyalty to Islamic extremist groups to get the deputies off his back: “After Boston bombing occurred—everyone got really nasty—I said—know what I’m related to Boston bomber is my first cousin and matter of [fact]—related to ft hood [sic] shooter—I know Kenya mall shooters—said so they would leave me alone.”

Judicial Watch, the right-wing outfit that obtained the police documents on Mateen through a Freedom of Information request, cited Mateen’s obviously absurd claims of a relationship to the Boston bombers as evidence that the FBI “blew it.” However, Judicial Watch omitted from its press release any reference to the extensive documentation of racial harassment Mateen allegedly endured at the hands of sheriff’s deputies, thus obscuring the context in which his claims occurred.

After his interview with FBI agents, who described Mateen as polite and cooperative, Mateen pleaded for understanding and respect. “I love the United States,” he wrote. “The boasting [of terrorist ties] I did it just to satisfy the gang of coworkers who ganged up against me. There is no fact to it. I’m 1000% American. I’m ready to give up my life defending the United States.”

Mateen continued: “Again I want to emphasize that I’m a honest American and that I’m 1000% anti terrorist organizations and their ideas. That’s why I chose to have a future in Law Enforcement. Maybe to become a ATF, Customs or FBI agent.”

On Oct. 2, 2013, Mateen was removed from his job as a private security guard at St. Lucie County courthouse, shattering his hopes of becoming a real cop like those who had bullied him for so long. In an email, Lt. Troy Church of G4S justified Mateen’s termination on the basis of his “aggressive posturing, raising his voice, and seeming attempting to incite his co-worker[s].”

It may be that Mateen’s former co-workers were right to view him with suspicion. Or perhaps he was lying or exaggerating about their racism. If so, he would have needed an unusually active imagination to conjure up such detailed accounts of their anti-Muslim behavior.

Islamophobic workplace harassment has factored into at least two other mass shootings popularly chalked up as terror attacks. In the days leading up to the San Bernadino mass killing, the shooter, Syed Farook, was repeatedly confronted by a right-wing evangelical co-worker, Nicholas Thalasinos, who reportedly berated him about the inherent violence of Islam and preached to him the righteousness of Israel’s cause. “Thalasinos was also a hate filled bigot,” wrote New York Daily News columnist Linda Stasi, pointing to his Facebook posts trashing feminists and liberals, calling for Muslims to be exterminated and proposing that far-right pundit Ann Coulter be appointed head of the Department of Homeland Security. When Farook opened fire on his co-workers, Thalasinos was among those he targeted.

The story of Ft. Hood shooter, Army Major Nidal Hassan, is also filled with reports of workplace harassment. Hassan had hired a lawyer to get him a discharge or exemption from deploying to Iraq or Afghanistan, two wars he fervently opposed. Rep. Michael McCaul, a Republican who now heads the House Homeland Security Committee, described Hassan as “disgruntled in the mission in Iraq and Afghanistan.” According to Hassan’s family members, he was constantly harassed by army colleagues, who called him a "camel jockey" and menaced him with anti-Arab insults. The Army’s refusal to answer Hassan’s request for a discharge was the most plausible motive for his shooting spree, yet the Arab-American soldier was ultimately painted in mainstream media and by militaristic members of Congress as a fanatical terrorist burrowing from within America's most revered institution.

As with Hassan, Mateen’s descriptions of racial harassment at the hands of his co-workers threaten to complicate the politically convenient narrative of "lone wolf" jihadism. To the extent that Mateen's testimony is true, it sheds new light on the culture of racism at the heart of many law enforcement organizations and illuminates the destructive impact of Islamophobia. Perhaps that’s why the documents detailing his complaints have been so thoroughly underplayed since their release, if not ignored altogether.

“I learned if I boast of the terrorist events they would get the satisfaction and they would leave me alone in the courthouse,” Mateen said of his police co-workers back in 2013. Three years later, he acted out a version of those events, realizing the cartoonish stereotype he claimed the deputies made of him.

Asked by the Orlando Sentinel if it had investigated its personnel over Mateen’s complaints, the St. Lucie County Sheriff’s Office did not respond.

Max Blumenthal is a senior editor of the Grayzone Project at AlterNet, and the award-winning author of Goliath and Republican Gomorrah. His most recent book is The 51 Day War: Ruin and Resistance in Gaza. Follow him on Twitter at @MaxBlumenthal.