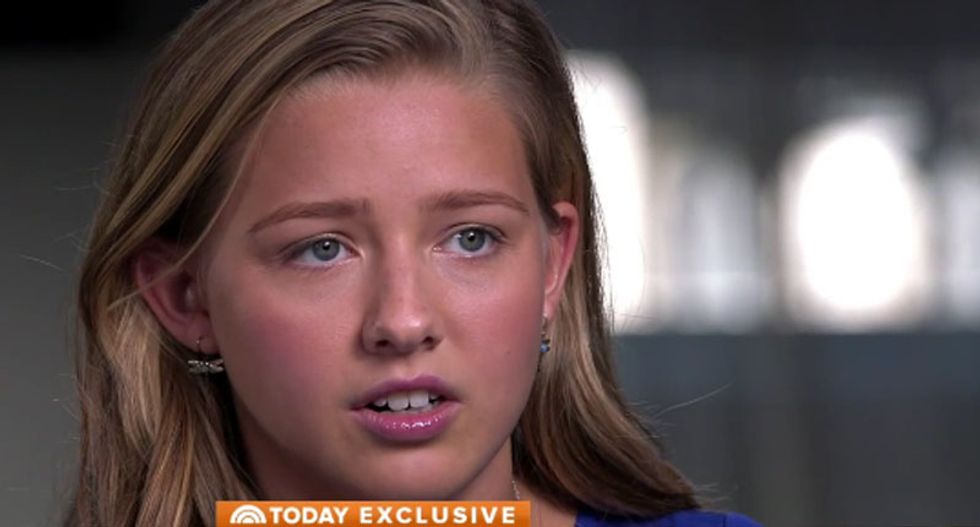 Chessy Prout during an interview with TODAY (Screenshot)

A girl who was the focus of a high-profile criminal trial last year after accusing a fellow student of sexual assault has said their elite New Hampshire prep school did not take the incident seriously.

In an interview broadcast on NBC's "Today" program on Tuesday, Chessy Prout, 17, identified herself publicly as the victim in the case and said she would not have pursued criminal charges against Owen Labrie had she received a letter of apology following the May 2014 incident.

"There was just no recognition that I had gone through something like this," Prout said. She returned to the St. Paul's School in Concord after the incident but said she was ostracized and subjected to jokes by male students.

"I tried my best to go back to my school and try to have a normal life again," she said. "But if they're going to treat this topic as a joke, this is not a place I want to be."

Labrie, now 20, was found not guilty in August 2015 of raping Prout, who was 15 at the time of the incident. He was sentenced to a year in prison for convictions on lesser charges, including using a computer to seduce a minor and three misdemeanor counts of having sex with a person under the age of consent.

The case shone a harsh light on the culture of St. Paul's, which Prout's family said turned a blind eye to an unofficial tradition known as the "senior salute," in which graduating students sought out younger students for sex.

Prout's family filed suit in June, charging the school did not do enough to protect her.

"We categorically deny that there ever existed at the school a culture or tradition of sexual assault," the school said in a statement on Tuesday. "However, there’s no denying the survivor's experience caused us to look anew at the culture and environment."

St. Paul's said it had taken steps including upgrading security systems and providing new training to students and staff on preventing sex assault.

Prout spent three days testifying during the trial, acknowledging she had accepted Labrie's invitation to meet but saying she expected to kiss him and not go much further.

Defense lawyers said Labrie and the girl had a mutually flirtatious relationship and went on to have a consensual encounter that stopped short of intercourse.