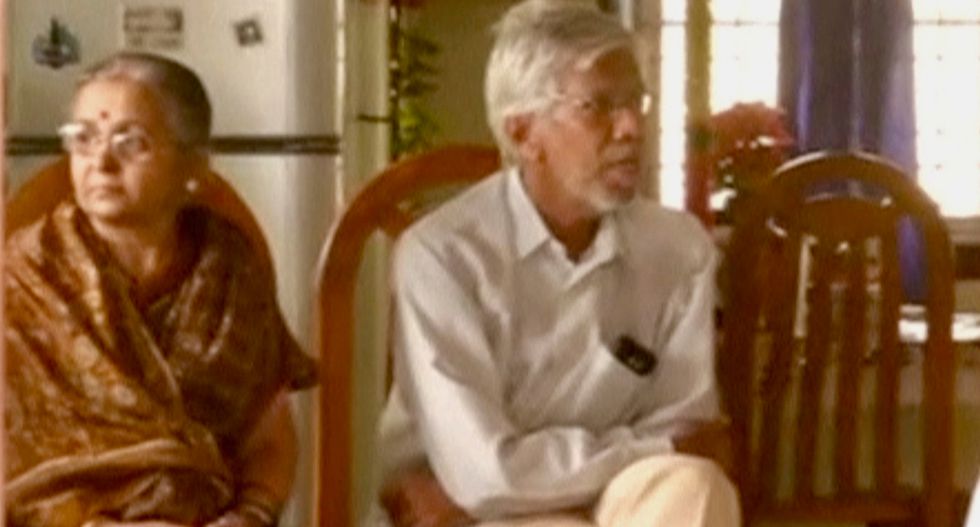 A still image taken from a video shows relatives of Srinivas Kuchibhotla, who was shot dead in a possible hate crime in Kansas state of the U.S., siting in their home in Hyderabad, Telangana, India, February 24, 2017. ANI/via Reuters TV

That dream was shattered on Wednesday.

A local man shot dead Kuchibhotla, 32, and wounded his colleague Alok Madasani in a case U.S. federal authorities are investigating as a possible hate crime.

Local media quoted eyewitnesses saying the attacker shouted "get out of my country" before opening fire as the colleagues shared an after-work drink in a local bar.

The shooting has sparked outrage in India, with criticism mounting that U.S. President Donald Trump's "America First" rhetoric is fuelling intolerance towards immigrants.

The Indian government expressed its shock and condemned the incident, but Kuchibhotla's relatives called for more action.

"The government should voice this out strongly, because our brothers, sisters and our relatives are there," Kuchibhotla's brother, Venu Madhav, told Reuters Television, standing outside his home in the southern city of Hyderabad.

"If you really look into this incident, this is not done by a teenager or a burglar," Madhav said, referring to the 51-year-old attacker.

Through a window, relatives could be seen sitting quietly, one woman wiping away tears.

Kuchibhotla was one of many ambitious young Indians who go abroad each year in search of a better education and career prospects.

More than 3 million Indians live in the United States. As a community, they are twice as well off as other Americans, with an average household income of more than $100,000.

The Southern Poverty Law Center said the number of hate groups in the United States rose for a second year in a row in 2016, linking the increase to Trump's presidential candidacy, and this week's incident has further heightened concerns among Indians about their treatment there.

"After the nightmarish incident, do we really need to go and work in (the) U.S.?"

After obtaining a bachelor's degree in technology in India, Kuchibhotla left his home town of Hyderabad for El Paso, Texas, to pursue a master's degree in electrical engineering, according to his LinkedIn profile.

He then worked as a software and systems engineer at Rockwell Collins, Iowa.

Married about four years ago, Kuchibhotla, who called himself "Srinu" on his Facebook page, and his wife spent their early years of marriage watching Bollywood movies, celebrating New Year's eve by clicking selfies and traveling across the United States.

"Four states, 1,500 miles, three days and finally at Dallas to end year 2013," his wife wrote on her Facebook page at the time.

On Thursday, he and his colleague Madasani were at Austins Bar and Grill in Kansas when the shooting took place.

Kuchibhotla's former colleague, Kavipriya Muthuramalingam, fondly remembered him as a dear friend who would never be confrontational.