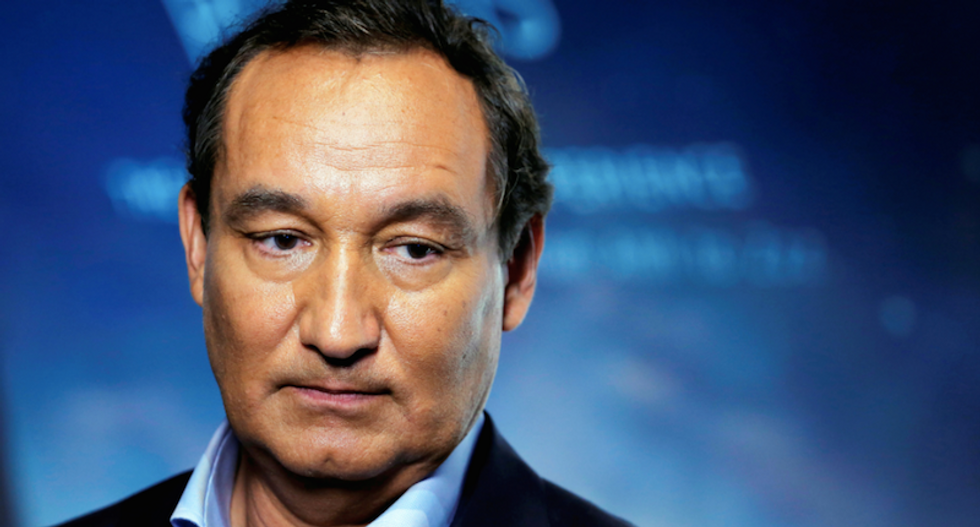 United Airlines sparked outrage on Monday for the treatment of a passenger who was physically dragged off a plane the airline had overbooked, and one of the security officers involved in the incident was placed on leave pending an investigation.

Videos posted online by other passengers showed a man screaming as officers yanked him from his seat on United Flight 3411 before it departed from Chicago O'Hare International Airport to Louisville, Kentucky, on Sunday.

The man, who appeared to be Asian, was seen being dragged down the aisle on his back by his hands, body limp, bleeding from the mouth, glasses askew and shirt pulled up above his navel. The videos sparked outrage on social media, the second time in less than a month that United was criticized for its treatment of passengers.

In a letter circulated to employees and seen by Reuters, United Chief Executive Officer Oscar Munoz did not apologize for the way the passenger was handled, writing that the passenger had "defied" security officers.

Munoz said there are lessons the company can learn from this situation, though he impressed that he "emphatically" stands behind his employees.

"We sought volunteers and then followed our involuntary denial of boarding process (including offering up to $1,000 in compensation)," Munoz wrote. "When we approached one of these passengers to explain apologetically that he was being denied boarding, he raised his voice and refused to comply with crew member instructions."

The Chicago Department of Aviation said in a statement that one of the officers did not follow protocol and added that he had been placed on leave pending a review for actions not condoned by the department.

The U.S. Department of Transportation (DOT) said it was reviewing whether United complied with overbook rules that require airlines to set guidelines on how passengers are denied boarding if they do not volunteer to give up their seats.

"While it is legal for airlines to involuntarily bump passengers from an oversold flight when there are not enough volunteers, it is the airline's responsibility to determine its own fair boarding priorities," a DOT spokesperson said in a statement.

The incident was one of the top-trending topics on Twitter as users took to the website to express their anger toward the airline.

Video of the incident posted to Twitter account @Tyler_Bridges shows three security officers huddling over the seated passenger before dragging him to the floor.

Bridges said the man told United staff that he was a doctor and had to return home to his patients.

The airline said it had asked for volunteers to leave because additional flight crew needed to get to Louisville.

Many social media users criticized United for how it handled the situation.

"Apologize for saying you 'had to' do this. There were other options and you know it," user @TessaDare wrote in a series of posts retweeted thousands of times. "Apologize for creating and allowing a corporate culture that says it's okay to treat passengers with such disregard and disdain."

In Bridges' video, a woman asks: "Can't they rent a car for the pilots and have them drive?" Two uniformed men then reach into the man's seat and snatch him from his chair.

Fellow passenger Jayse D. Anspach, who goes by @JayseDavid on Twitter, wrote: "No one volunteered (to leave), so @United decided to choose for us. They chose an Asian doctor and his wife."

"It looked like he was knocked out, because he went limp and quiet," Anspach wrote, "and they dragged him out of the plane like a rag doll."

Another video shows the distressed man, still disheveled from the wrangle, returned to the cabin, clinging onto a curtain at the back of the plane and repeating: "Just kill me. Kill me," and "I have to go home," as blood streaked down his mouth.

Much of the online uproar surrounded the appropriateness of removing a paying customer in order to accommodate airline staff.

"They bloodied a senior citizen & dragged him off the plane so THEIR OWN STAFF could take his seat," one Twitter user wrote.

Other social media users questioned whether the man would have been removed as forcefully had he not been Asian.

Outrage also erupted on Chinese social media, with the topic attracting more than 130 million views on its Weibo platform by Tuesday afternoon.

Many users focused on comments from a fellow passenger reported in the Washington Post, who said the man dragged off the plane said he was "being selected because I'm Chinese."

"This makes me recall the nightmare experiences I had the three times I flew with United Airlines," Liu told his more than 3 million followers.

"United's service is definitely the worst in the world!"

Late last month, two teenage girls dressed in leggings were denied boarding on a United flight from Denver to Minneapolis because their form-fitting pants did not conform to the dress code for employees or family members using free passes.