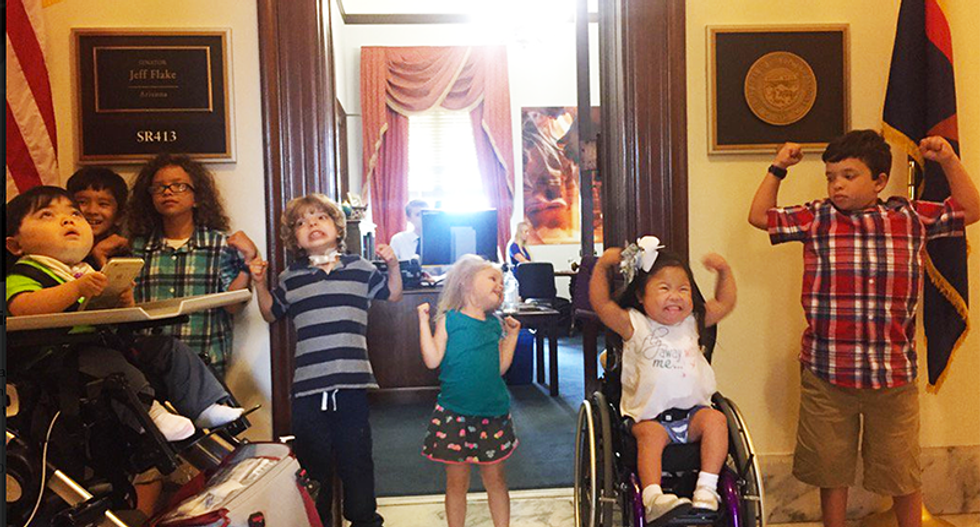 All eyes were on Arizona Sen. John McCain early Friday morning as the Senate prepared to vote on what it dubbed a “skinny repeal” of the Affordable Care Act. After a week of Senate Republicans scrambling to pass legislation resembling some form of a health care bill, legislators, the media and the public waited tensely to see how GOP moderates and potential swing-voters like Sen. Lisa Murkowski, Sen. Susan Collins and McCain would vote.

The skinny repeal bill died on the Senate floor just before 1:30am, its chances of becoming law evaporating with McCain’s tiebreaking no vote, complete with a dramatic thumbs-down gesture. Audible gasps and applause arose from the Senate chamber, and activists protesting the bill on Capitol grounds into the late-night hours cheered.

As the news media reported the story, a specific narrative emerged painting McCain as a hero for killing the GOP's attempts to repeal the ACA. Coverage of the vote’s aftermath seemed to focus solely on McCain while saying little about the 51 other "no" votes, including those of Murkowski and Collins.

The focus on McCain as Obamacare’s knight in shining armor quickly drew the ire of many social media users and journalists, who pointed out that Murkowski and Collins were deciding factors against the health care bill’s failure as well. The home page of the Huffington Post even carried the headline “Nevertheless, they persisted” with pictures of Murkowski and Collins to combat the McCain narrative. “These Two Women Senators Are The Real ‘Mavericks’ Of The GOP Health Care Vote” reads the article's headline.

What all this media coverage ignores is the tireless and determined organizing of activist groups against the bill. If anyone is to be heralded a hero for saving the ACA, it’s the activists from ADAPT, a disability rights organization, who have been on the front lines fighting for their right to health care.

The primary factor driving ADAPT organizers and disability rights activists is the need to protect Medicaid, a program that has helped an estimated 10 million disabled people and counting, according to Kaiser Family Foundation. With both the House and Senate’s health care bills proposing drastic cuts to Medicaid, people with disabilities are particularly vulnerable.

“Medicaid is a lifeline for us,” said Laura Halvorson, a member of the DC Metro ADAPT chapter. “It gives us our life and liberty.”

ADAPT activists, ranging in age from parents with younger children to the elderly, held about 40 protests, rallies and sit-ins this week and over the past few months to pressure the lawmakers working to strip health care away from millions of people. These demonstrations took place in legislative offices on Capitol Hill as well as representatives' local offices across the country, the message ringing loud and clear.

Protesters were often met with aggressive police presence. A "die-in” protest organized by ADAPT on June 22 to commemorate the 18th anniversary of the Supreme Court decision in Olmstead v. LC—which affirmed the rights of the disabled to live in communities instead of institutions—outside Senate Majority Leader Mitch McConnell’s office led to the arrests of 43 people. Footage from reporters on the scene shows officers lifting individuals out of their wheelchairs to remove them from the vicinity.

A horrific metaphor for Trumpcare: this disabled woman literally being ripped from her wheelchair. #StopTrumpcare https://t.co/F5kmz8rnCv
— Matt McDermott (@Matt McDermott)1498150275.0

After a two-day demonstration July 7 at the office of Sen. Rob Portman in Columbus, Ohio, 15 ADAPT protesters were arrested and charged with criminal trespassing. Days later, at least 80 other protesters were arrested by Capitol police after surrounding the offices of several Republican representatives, including Ted Cruz and Jeff Flake. Capitol police clashed again with activists on Wednesday in the Senate gallery and Hart Senate Office Building at another ADAPT-organized rally where activists chanted “Kill the bill, don’t kill us” as the Senate voted on whether to move forward with debate on the health care law.

ADAPT was not the only group rallying against the GOP’s dangerous health care bills. Members of National Nurses United, the largest nurses' union in the country, organized several demonstrations, including the July protest that resulted in 80 arrests. The Democratic Socialists of America held rallies in D.C. and other cities to defend the ACA and advocate for single-payer health care.

Religious groups also remained vocal against attempts to repeal the ACA and severely cut back on Medicaid. The Circle of Protection, a group of Christian leaders dedicated to defending federal programs that help the poor, organized a pray-in Thursday inside the Senate chambers while senators deliberated over repealing the ACA.

In addition to receiving hundreds of phone calls from concerned constituents, senators heard from the Little Lobbyists, a group of children with complex medical needs. The Little Lobbyists spent much of July 10 talking to senators and asking them to vote no on the Senate’s health care bill. Many of these kids benefit from having their medicines and treatments covered by Medicaid.

While the GOP’s seven-year crusade to repeal the ACA is at another standstill, Halvorson says ADAPT remains vigilant for future efforts to take away their health care and access to Medicaid.

“We’re not stopping,” she said. “We know that the fight is not over, so we’re going to keep on keeping on.”