'Get out!': Lt General rains hell on Air Force Academy after racist messages were left on black cadets' rooms 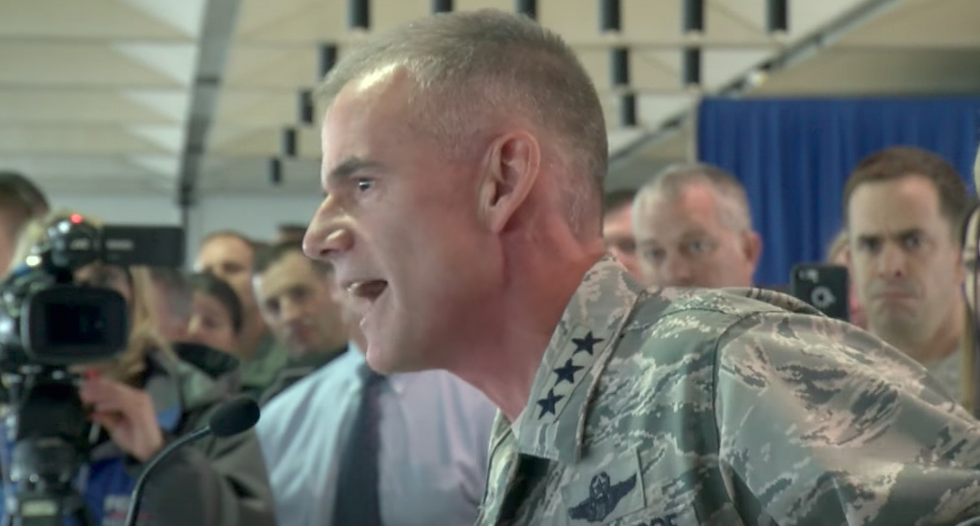 Lt. Gen. Jay B. Silveria, superintendent of the U.S. Air Force Academy, addressed cadets on Thursday in a powerful speech about treating one another with “dignity and respect” after racial slurs were written outside five black cadet candidates’ dorm rooms.

One message—which was posted on Facebook by a young cadet candidate's mom—read, “go home n**ger."

“There is absolutely no place in our Air Force for racism,” Silveria told the Air Force Times, adding, “I‘ve said it before: the area of dignity and respect is my red line. Let me be clear, it won’t be crossed without significant repercussions."

And clear he was. In a speech Silveria gave to Air Force cadets Thursday, the general addressed the incident head-on; during the roughly 5-minute lecture, the superintendent resoundingly denounced racism, and demonstrated the kind of moral clarity one would expect from a leader.

“You should be outraged not only as an airman, but as a human being,” he added.

Silveria noted the incident occurred in the context of fraught racial tensions in the United States as a whole. “We would be naive to think we shouldn’t discuss this topic,” he said. “We’d also be tone deaf not to think about the backdrop of what’s going on in our country. Things like Charlottesville and Ferguson, the protests in the NFL.”

“What we should have is a civil discourse, and talk about these issues,” Silveria suggested. “That’s a better idea.”

He called upon his cadets to find the "moral courage" to stand up for those values.

“If you can’t treat someone with dignity and respect, then get out,” Silveria repeated.

Watch the video below, via NBC’s Colorado Springs affiliate KOAA: