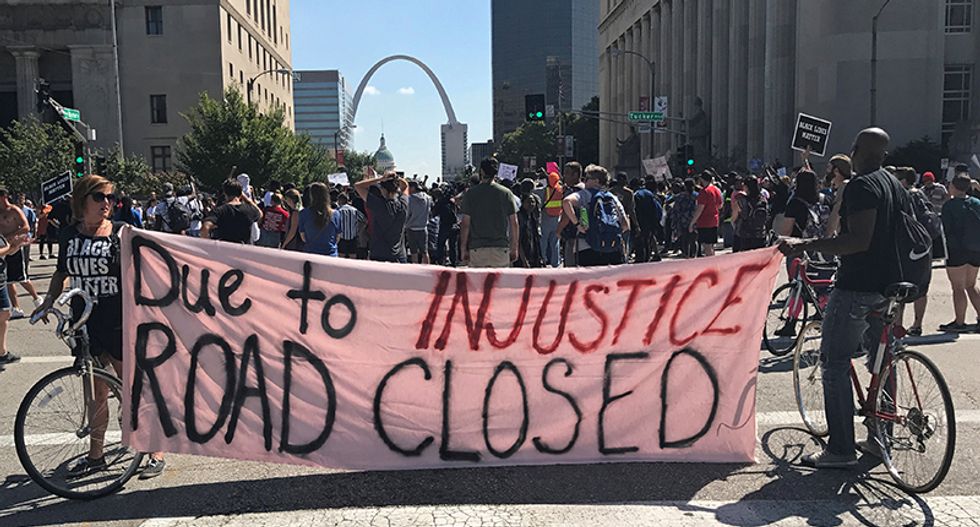 People march downtown after the not guilty verdict in the murder trial of Jason Stockley, a former St. Louis police officer, charged with the 2011 shooting of Anthony Lamar Smith, who was black, in St. Louis, Missouri, U.S., September 15, 2017. REUTERS/Lawrence Bryant

Hundreds of protesters poured into St. Louis' streets and some scuffles broke out as they voiced their anger after a Missouri judge on Friday ruled a white former St. Louis police officer was not guilty of murder in the 2011 shooting of a black man.

With the National Guard on standby in case of violence, authorities appealed to protesters to march peacefully in a state where racially charged clashes in the nearby city of Ferguson spawned the Black Lives Matter movement in 2014.

Police said a few protesters threw rocks and water bottles, while witnesses and video showed officers used pepper spray on at least five people about a block from the courthouse. About 50 riot police were on hand, blocking a ramp to a nearby highway.

Jason Stockley, 36, was acquitted of first-degree murder for killing Anthony Lamar Smith, 24. The former policeman said Smith fled in his car when he attempted to arrest him on drug charges.

Stockley and his partner chased Smith, who was shot five times in his car. The former policeman thought Smith had a gun, defense attorneys said. A gun was found in the car but prosecutors argued Stockley planted the weapon and the gun had only Stockley's DNA on it.

After the verdict, about 600 protesters marched in downtown St. Louis, chanting "No justice, no peace" and "Hey hey! Ho ho! These killer cops have got to go!"

Later in the evening, a group of about 300 protesters moved from the courthouse to the city's popular restaurant neighborhood, the Central West End.

"I’m sad, I’m hurt, I’m mad,” the Reverend Clinton Stancil of the Wayman AME Church in St. Louis said by telephone. “We haven’t made any progress since Ferguson, that’s clear. Cops can still kill us with impunity."

Stockley's attorney, Neil Bruntrager, said the ex-officer on Friday was relieved and would seek to rebuild his life. “It’s been a long road for him,” Bruntrager said.

Judge Timothy Wilson's ruling said the state had not proven murder beyond a reasonable doubt or even a lesser charge such as involuntary manslaughter.

The judge also doubted the prosecution's claim the gun was planted and wrote, "Finally, the court observes, based on its nearly 30 years on the bench, that an urban heroin dealer not in possession of a firearm would be an anomaly."

The comment sparked outrage by protesters on the street and on social media.

In recent years grand juries have declined to charge officers involved in the 2014 fatal shooting of Michael Brown, 18, which set of nights of violent protest in Ferguson, and the choking death of Eric Garner, 43, in New York. Baltimore police officers also were not convicted in the case of Freddie Gray, who died from a broken neck suffered in a police van in 2015.

"You all know this ain't right and you all continue to do this to us," he told a St. Louis Fox television station. "Like we don't mean nothing, like we're rats, trash, dogs in the streets. Right now, I'm praying for my city because my people are tired of this."

Ben Crump, an attorney for the Brown family, said the decision would only widen the "chasm of mistrust" between law enforcement and minority communities.

"This decision will outrage many,” he told Reuters. “You see this happen over and over again.”

Prosecutor Kimberly Gardner said she was disappointed with the verdict and called on protesters to avoid violence.

“I understand the verdict has created anger and frustration for many in our community," she told reporters at the courthouse. "I am frustrated as well. Destruction of our community is not the answer."

Smith tried to flee from Stockley on Dec. 20, 2011, following an alleged drug deal, authorities said. During the pursuit, Stockley could be heard saying on an internal police car video he was going to kill Smith, prosecutors said.

At Stockley's direction, the driver of the police car slammed into Smith's vehicle and they came to a stop, court documents said. Stockley then approached Smith's car and shot him five times with his service weapon.

Stockley waived his right to a jury trial, allowing the judge to decide. He left the St. Louis Metropolitan Police Department in 2013 and was arrested last year.