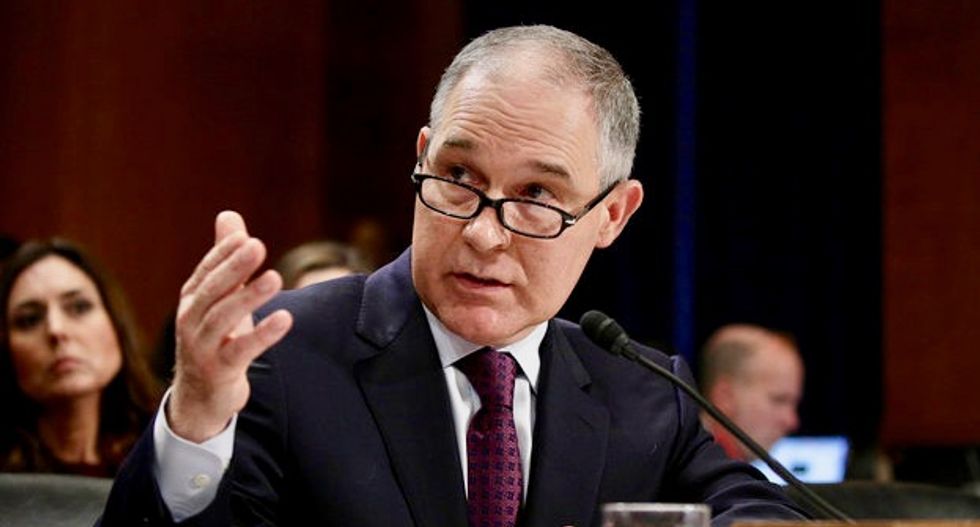 A statement from the Environmental Protection Agency (EPA) -- now headed by Republican Scott Pruitt -- attacked the two Associated Press journalists who revealed on Saturday that multiple highly toxic "Superfund" sites had not been assessed for risks in the wake of Hurricane Harvey.

Gizmodo.com reported on Sunday that the EPA issued "an extraordinary statement" attacking AP reporters Jason Dearen and Michael Biesecker -- whose on-the-ground reporting broke the story on Saturday -- and smearing their integrity as journalists.

The statement called the AP report "misleading" and said, "Here’s the truth: through aerial imaging, EPA has already conducted initial assessments at 41 Superfund sites—28 of those sites show no damage, and 13 have experienced flooding."

Aerial imaging, however, cannot measure the level of poisons in the air and water around the sites or detect how far they have spread.

“Administrator Pruitt already visited Southeast Texas and is in constant contact with local, state and county officials,” the statement said, but failed to mention whether Pruitt had been to any of the sites or ordered inspections.

The statement went on to attack Biesecker's credibility.

"Unfortunately, the Associated Press’ Michael Biesecker has a history of not letting the facts get in the way of his story. Earlier this summer, he made-up a meeting that Administrator Pruitt had, and then deliberately discarded information that refuted his inaccurate story -- ultimately prompting a nation-wide correction. Additionally, the Oklahoman took him to task for sensationalized reporting,” the EPA said.

Gizmodo issued a correction to the agency's "correction," however, writing, "Biesecker did not make up the story, which is that Pruitt met with Dow CEO Andrew Liveris before deciding not to ban Dow’s chlorpyrifos pesticide, but instead issued a correction regarding the length of said meeting."

Gizmodo said, "Since the EPA did not actually contest any of the facts in the AP article, this looks an awful lot like petty retaliation against journalists for having the temerity to report on things like the EPA’s response to an environmental catastrophe—or any number of other things, like Pruitt’s extremely sketchy tiesto the climate change denial movement, war on environmental science or plans to eliminate huge numbers of EPA staff."

The statement lambasted Dearen and Biesecker as having authored their report from "the comfort of Washington," when in fact, both reporters traveled to the sites in question and reported from Houston throughout the storm.

"As someone who was there," Dearen wrote on Twitter, "I can confirm it was hot, and smelly."

(Correction: A previous version of this story incorrectly stated that the EPA had deleted their statement. The story also falsely labeled Breitbart as a white nationalist website.)