One dead as thousands flee wildfires in California wine country 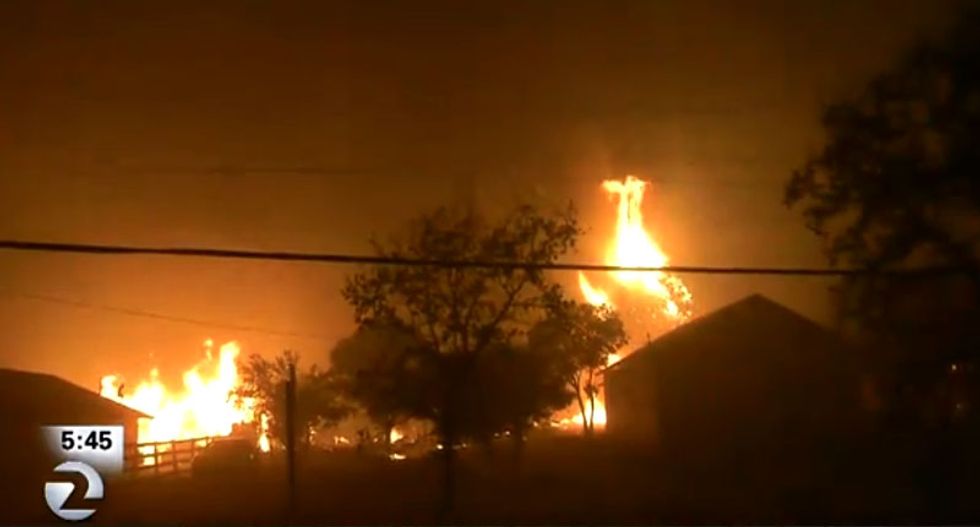 Wildfires fanned by strong winds swept through California's wine country on Monday after killing at least one person, forcing some 20,000 residents to flee, and destroying hundreds of homes and businesses.

Governor Jerry Brown declared a state of emergency for Northern California's wine-making Napa, Sonoma and Yuba counties as the blazes raged unchecked and engulfed the region in thick, billowing smoke that drifted into San Francisco and Oakland.

At least one person was killed in Mendocino County, the California Department of Forestry and Fire Protection (CalFire) said, declining to release further details.

It was not immediately clear when the person died.

About 1,500 homes and commercial buildings have been destroyed, Ken Pimlott, director of CalFire, said at a news conference.

The blazes included the so-called Tubbs fire in Napa County, about 70 miles (113 km) north of San Francisco in an area world-famous for its vineyards. It had scorched about 25,000 acres (10,117 hectares) of land as of late Monday morning, according to CalFire.

John Van Dyke, standing in his pajamas near the 101 Freeway in Santa Rosa, watched a hillside in flames from the Tubbs Fire. Police pounded on his door in the mobile home park early Monday, telling him to evacuate.

"When I got in the car to leave, a whole section of the mobile park was in flames," he said. "It scared the hell out of me."

San Francisco authorities issued an air quality alert due to smoke from the fires, which residents said they could smell from the early morning hours.

Wesley Carr, 23, a resident of Sebastopol in Sonoma County, said on Monday morning that smoke from the fires had enveloped the area.

"The sun is a pale yellow, that's how thick the smoke is," he said, adding that ash was floating in the air from one of the fires, which he estimated is about 30 miles away.

A wildfire also torched a handful of homes in Southern California in the affluent Anaheim Hills neighborhood in Orange County.

The blaze erupted along the 91 Freeway next to an off-ramp and spread quickly in gusty winds to char more than 500 acres (202 hectares), Orange County Fire Authority spokesman Captain Larry Kurtz said by phone.

Authorities in the cities of Anaheim, which includes Anaheim Hills, and Orange ordered hundreds of residents to evacuate.

(Reporting by Keith Coffman in Denver and Gina Cherelus and Joseph Ax in New York, Writing by Alex Dobuzinskis; Editing by Diane Craft and Tom Brown)