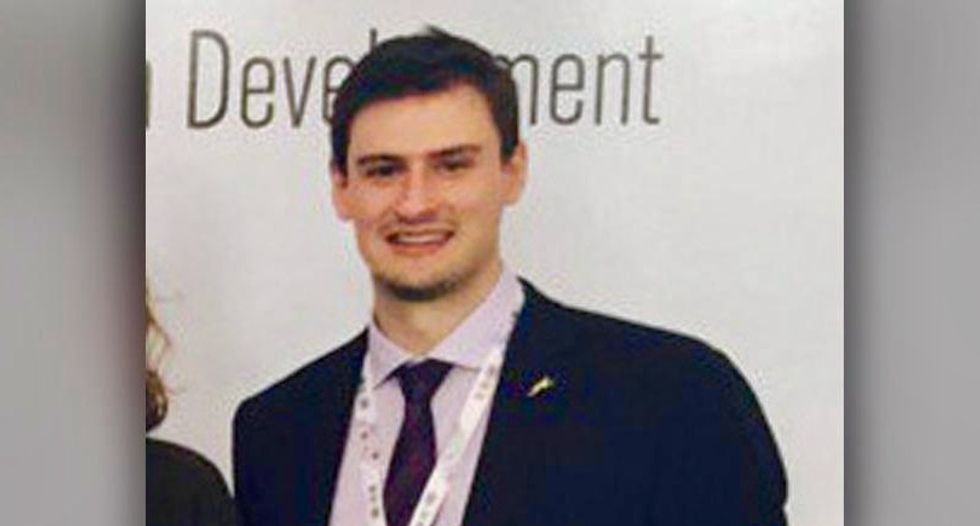 An Australian diplomat accidentally fell five floors to his death on Wednesday from the deck of his New York City home during a social gathering with his wife and friends, police and local media said.

Julian Simpson, 30, plummeted from a seventh-floor balcony to a second-floor landing shortly after 1 a.m. (0600 GMT) at the 19-story apartment building in the Lower East Side neighborhood of Manhattan, New York Police Department spokesman Martin Brown said.

"He's described as somebody who liked to play games and had sat on the balcony railing and accidentally lost his balance," Brown said.

Simpson, a junior diplomat with the Australian Mission to the United Nations, was said to have been playing a "trust game" with an unidentified male house guest, according to the New York Post, citing unidentified police sources.

Simpson instructed the man to catch him as he sat on the railing of the balcony and leaned back to prove that he could trust him, the local newspaper reported.

But Brown said media reports of a trust game, where a person deliberately falls back and relies on another to catch them, have not been confirmed. The police spokesman added that a toxicology report would determine whether Simpson was under the influence of alcohol at the time of his death.

The diplomat was taken to Mount Sinai Beth Israel hospital where he was pronounced dead, the Post reported.

Simpson and his wife were out with friends before returning back to his residence to view the Empire State Building, which illuminated rainbow colors in celebration of Australia's same-sex marriage vote, The Post reported.

A representative for the Permanent Mission of Australia to the United Nations and the Australian Department of Foreign Affairs did not immediately respond to a request for comment.

The investigation is ongoing, police said.