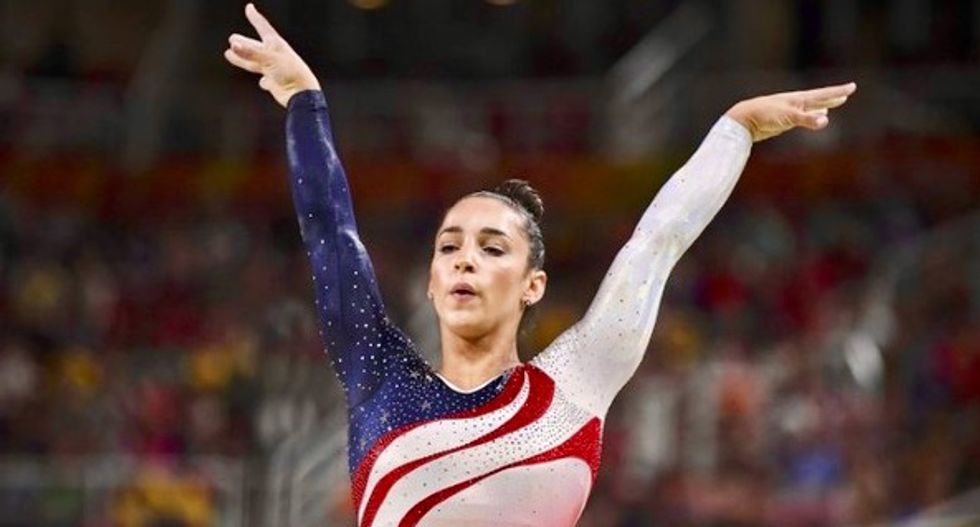 Triple Olympic gymnastics champion Aly Raisman has said in a interview she did not realize at first that she had been treated inappropriately by a doctor accused of having sexually assaulted female gymnasts while he was the U.S. team doctor.

Speaking on the "60 Minutes" television program, Raisman said she wanted to educate young gymnasts that it was sometimes difficult to understand the warning signs of sexual abuse.

When first interviewed by an investigator hired by USA Gymnastics in 2015, Raisman did not immediately accuse the doctor, Larry Nassar, of inappropriate or illegal behavior.

"I was just really innocent. I didn't really know. You know, you don't think that of someone. You know, so I just, I trusted him," said Raisman, who says she was 15 when she was first treated by Nassar.

Nassar has pleaded not guilty to charges of sexual assault. He is in jail awaiting sentencing after pleading guilty to federal child pornography charges.

Nassar's attorneys, Matt Newburg and Shannon Smith, have each said that due to a gag order they had no comment on the television program.

Raisman said she felt awkward about the doctor's behavior but she thought he was a caring person.

"I said 'Well, his touching makes me uncomfortable, but he's so nice to me' ... and 'I don't think he does it on purpose because, you know, I think he cares about me'."

"I didn't know anything differently. We were told he is the best doctor. He's the United States Olympic doctor and the USA Gymnastics doctor, and we were very lucky we were able to see him.

"I was in denial. You don't want to let yourself believe (you are a) victim of sexual abuse."

It was only later that Raisman, now 23, started to question Nassar's motives and behavior.

"He would always bring me, you know, desserts or gifts. He would buy me little things. So I really thought he was a nice person."

"I want people to know just because someone is nice to you and just because everyone is saying they're the best person, it does not make it OK for them to ever make you uncomfortable."

According to "60 Minutes", more than 130 women, many of them former athletes, have filed civil lawsuits alleging that Nassar sexually abused them under the guise of treating them for hip, back and other athletic injuries.

Raisman is the second member of the "Fierce Five" gymnasts, who won a team gold at the 2012 London Olympics, to allege abuse by Nassar, joining McKayla Maroney.

USA Gymnastics conducted a review of its procedures for handling sexual misconduct issues following reports last year that it turned a blind eye to allegations.

Steve Penny resigned in March as head of USA Gymnastics and the federation adopted a number of reforms in June that it said would help to prevent and respond better to future cases ofabuse.

But Raisman said that while a new policy was in place, she perceived a lack of support from senior administrators during a USA Gymnastics Hall of Fame induction ceremony this year.

"You know, my teammates and I were all sitting at the table, and they did not come over to say 'hi' to us or to congratulate us," she said. "We were treated like, you know, 'We don't want anything to do with you girls'."

She said she was still trying to process and come to terms with her experiences with Nassar.

"I think it's important for people to know too I'm still trying to put the pieces together today. You know it impacts you for the rest of your life," she said.

(Reporting by Andrew Both in Tokyo)