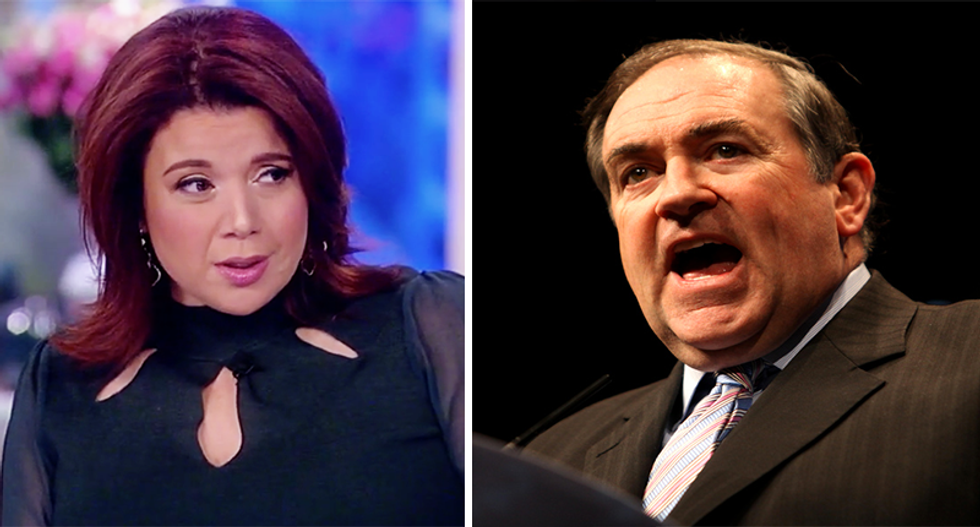 The justice and meme phenomenon announced that she had a prior engagement and wasn't going to make it to President Donald Trump's first State of the Union address. Huckabee responded by tweeting out the photo of her dozing off during a 2015 address.

Co-host Whoopi Goldberg clapped back at Huckabee for his tweet about Ginsburg, calling it "nasty."

"I loved her explanation," Goldberg recalled. "She was like, look, we went to dinner, and the meal was good, I decided, I need to have some wine. OK? So, I had some wine, and -- maybe I nodded off."

Ginsburg also explained in interviews that the previous night she'd been awake until the early hours of the morning writing her comments about an upcoming case.

"For a man who gets upset when SNL critiques his daughter, is this not strange?" Goldberg asked.

Co-host Sunny Hostin demanded Huckabee "have some respect" for a Supreme Court Justice.

But it was Navarro who went for the jugular.

"Two things: one, she's a Supreme Court Justice," Navarro agreed. "Two, he's a preacher. I mean -- he's still an evangelical preacher, right? Who does some TV and he's the father of the current press secretary who gets attacked all the time and he doesn't like it. So, I think, I would say, look, do unto others as you would like done unto you daughter."

Since they were on the topic of mean tweets, Navarro also called out Lynn Patton, an aide at Housing and Urban Development who called White House correspondent April Ryan "Miss Piggy" in a tweet. Navarro was furious that she's paying the woman's salary as a tax payer while she's attacking reporters on Twitter.

Goldberg asked for clarification on who the woman was and her colleagues told her it was Trump's former party planner. Goldberg broke into hysterics.

"Oh, that's who this is? Look, you know, not to throw shade or anything, but look in the mirror," Goldberg said.