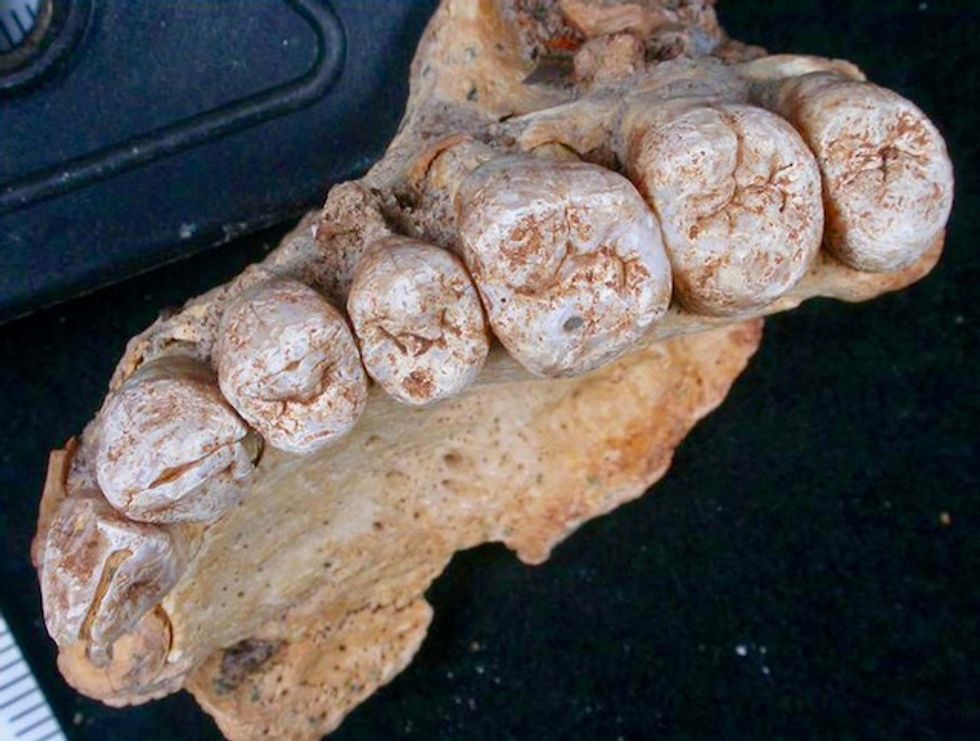 A close-up view of the teeth accompanying the left maxilla of human remains from Misliya Cave in Israel, the oldest remains of our species Homo sapiens found outside Africa, is provided in this photo released on January 25, 2018. Courtesy Israel Hershkovitz/Tel Aviv University/Handout via REUTERS

A partial jawbone bearing seven teeth unearthed in a cave in Israel represents what scientists are calling the oldest-known Homo sapiens remains outside Africa, showing that our species trekked out of that continent far earlier than previously known.

Researchers on Thursday announced the discovery of the fossil estimated as 177,000 to 194,000 years old, and said the teeth bore telltale traits of Homo sapiens not present in close human relatives alive at the time including Neanderthals.

The fossil of the left part of the upper jaw of a young adult -- the person's sex remains unclear -- came from Misliya Cave on Mount Carmel's western slopes about 7.5 miles (12 km) south of Haifa. Also found inside the large collapsed cave, once inhabited by humans, were blades and other stone tools that were sophisticated for the time, several hearths and burned animal bones.

Homo sapiens first appeared in Africa, with the earliest-known fossils roughly 300,000 years old. A key milestone was when our species first ventured out of Africa en route to populating the far corners of the globe.

Until now, the oldest Homo sapiens fossils outside Africa had come from two other cave sites in Israel, including one also on Mount Carmel, about 90,000 to 120,000 years old.

The new discovery supports the idea that humans migrated out of Africa through a northern route, the Nile valley and the eastern Mediterranean coast, and not a southern route across the Bab al-Mandeb strait, the southern coast of Saudi Arabia, the Indian subcontinent and East Asia, said Tel Aviv University paleoanthropologist Israel Hershkovitz, who led the study.

"This is an exciting discovery that confirms other suggestions of an earlier migration out of Africa," added paleoanthropologist Rolf Quam of Binghamton University in New York, a co-author of the study published in the journal Science.

"Now we finally have fossil evidence of this migration, in addition to inferences drawn from ancient DNA studies and archaeological sites," Quam said, referring to genetic research suggesting a migration from Africa at least 220,000 years ago and probably earlier.

Hershkovitz said he believes Homo sapiens may have originated some 500,000 years ago.

The Misliya humans were likely nomadic, moving around the landscape following the movements of prey species or according to the seasons of the year, Quam said.

"They were capable hunters of large-game species including wild cattle, deer and gazelles. They also made extensive use of plant materials, including perhaps for bedding," Quam added.