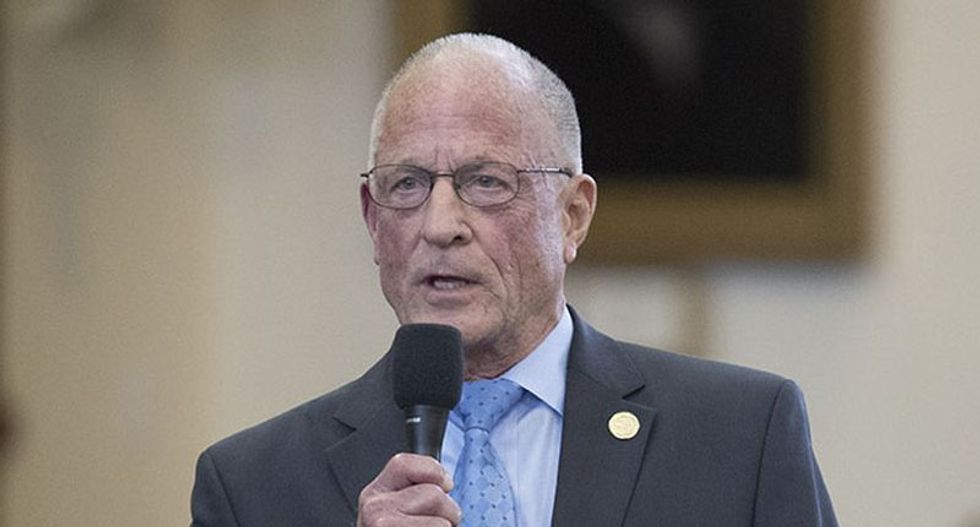 State Sen. Bob Hall, R-Canton, answers questions on Senate Bill 2095, a bill regarding steroid use by University Interscholastic League (UIL) athletes, on May 9, 2017. (Bob Daemmrich for The Texas Tribune)

The group, Texas Right to Life Committee, also filed last-minute corrections to its December campaign finance reports indicating that it had “inadvertently” attributed about $38,000 in radio ads to its corporate entity instead of its political action committee.

People in the area of Hall’s Northeast Texas district said they heard a similar or identical advertisement played over the radio in December.

The Tribune saved the audio of the ad and a copy of the Tweet before they were deleted.

Hall, a Tea Party-backed candidate from Edgewood who defeated Sen. Bob Deuell four years ago, is one of a handful of Senate incumbents facing a competitive primary race this year. He is being challenged by Rep. Cindy Burkett, R-Sunnyvale, and abortion restrictions have emerged as a key issue in the race.

Hall strategist Allen Blakemore, a top confidante of Lt. Gov. Dan Patrick, acknowledged that the senator cut a minute-long ad for the Texas Right to Life Committee but said he doesn’t know how the group paid for the spot or precisely how it was used.

Politically active nonprofits such as the Texas Right To Life Committee have increasingly used undisclosed corporate "dark money" in Texas, but there are laws restricting how it can be used. Misusing corporate money in Texas elections can trigger fines and even felony criminal sanctions.

“At the request of [Texas Right To Life], Sen. Hall read a 60-second audio script supplied by them,” Blakemore said. “Any question about how the recording was used or paid for should be directed to TRTL.”

Blakemore said that, as of Tuesday, Hall had not received any notification of a direct expenditure or in-kind contribution from Texas Right to Life.

Multiple calls and emails directed to the Houston-based Texas Right to Life Committee were not returned.

Former Ethics Commissioner Ross Fischer, who consults candidates and groups on how to follow often confusing state campaign finance laws, says there is a bright line on corporate money in Texas politics: It can’t be used like a regular campaign contribution, to be spent by or in coordination with the candidate to get elected.

What is allowable — and happens all the time — are “direct campaign expenditures,” where supporters use corporate funds in an election without a candidate’s “prior consent or approval,” as required by law.

“In the course of a routine audit we realized that the C4 [corporate entity] report inadvertently reflected an expense that belonged to Texas Right to Life's Political Action Committee,” the group wrote in its new filing.”This report corrects to reflect that the PAC did pay for the expense.”

It was not clear precisely what specific ads the contributions financed, but one Burkett supporter who heard a Bob Hall radio ad described a spot strikingly similar to the one the anti-abortion group deleted this week. Gail Hudler, a close friend of Burkett, said that while driving in mid-December around Brownsboro, she heard a radio ad that she thought was in Hall's voice and mentioned Texas Right to Life.

"It didn't mention [Burkett] by name, but it claimed she claimed to be a conservative, but wasn't — she was a liberal," Hudler said. Hudler's husband, who was in the car with her when the ad came on, also confirmed the general content of the spot.

Matt Brownfield, a Burkett spokesman, cast doubt on the notion that the expenditure of corporate funds amounted to an inadvertent clerical error.

"That compounds his problems," Brownfield added. "At some point he probably will get to explain all of this to a prosecutor."

BY PATRICK SVITEK AND JAY ROOT, THE TEXAS TRIBUNE