Florida rep. opens can of whoop-ass on GOP: 'Let's look the families in the face and tell them we'll do nothing' 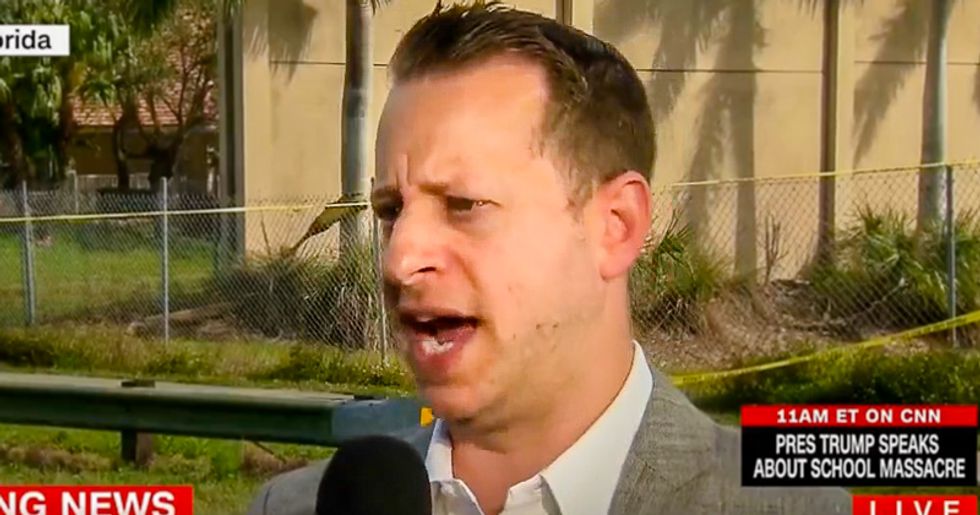 Florida state Rep. Jared Moskowitz (D) did not hold back about his disgust with the Republican Party for blocking legislation that could prevent mass shootings in the United States.

During an interview with CNN's John Berman on Thursday, Moskowitz accused Republicans of using talking points to avoid dealing with the mass shooting at Marjory Stoneman Douglas High School.

"They've poll tested that: 'Now is not the time'," he explained. "There's never a time. But we should just be honest. Let's just look the American people in the face, let's go look the families in the face that I sat there for six hours until they found out their kid wasn't missing, their kid lying dead in the school -- let's just look them in the face and let's be honest and let's tell them, we're going to do nothing."

"We're going to talk, we're going to spout off all sorts of different talking points from both sides of the aisle, but we're going to do nothing," Moskowitz continued. "Because we can't look at this just as parents, we have to look at this through a political lens for some reason, Democrats or Republicans."

The lawmaker observed that "we've created this."

"We can pray to God [but] God didn't do this," he remarked. "This is a manmade issue. It's only going to be solved by man. And we're not going to solve it because the system is rigged. Nowadays there's no real general elections anymore. It's primaries."

Moskowitz lamented that Florida Republicans would block any legislation he put forward to address the problem.

"They won't agree to anything," he said. "How about just background checks? How about the fact if on your Facebook you're telling everybody you're a Nazi and you're going to kill a thousand people, how about we take that into account when you want to go buy an AR-15? But we don't."

"We've seen this show before, we know how this movie is going to end," Moskowitz said. "They want to decrease the background checks. I will fight against that. I will file 100 amendments and I will hold the floor hostage for 15 hours."