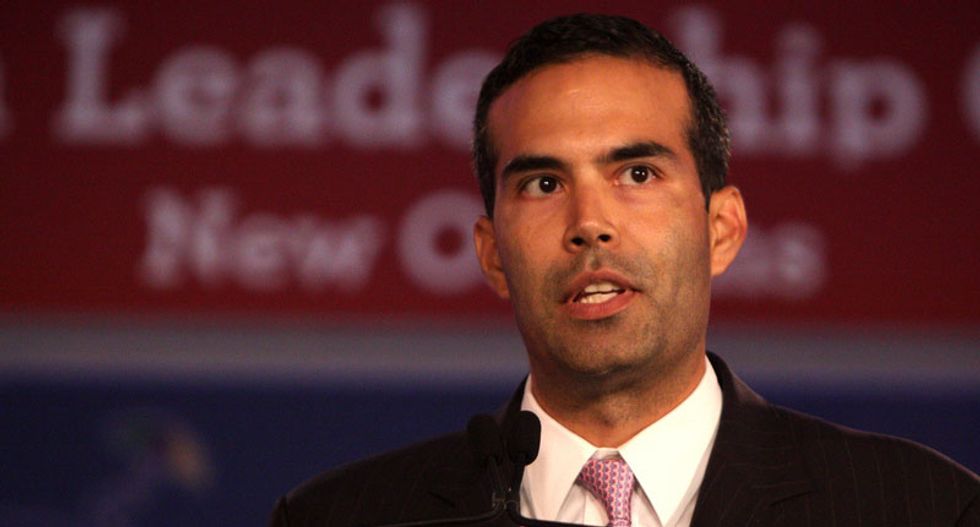 Texas Land Commissioner George P. Bush lives in an Austin mansion he financed at a bank owned by a major Republican donor who employed his wife, Austin lawyer Amanda Bush.

But voters would be hard-pressed to connect all those dots.

Bush’s name doesn’t appear in online property appraisal records for the 4,000-square-foot house he bought in a gated West Austin enclave in 2014. And the $850,000 mortgage from donor Brandon Steele’s East Texas bank isn’t disclosed on the personal financial statements that Bush, like all state candidates, must file.

The house — with four bedrooms, a fireplace in the master bedroom and a pool out back — is legally owned by a family trust that also isn’t disclosed in Bush’s personal financial statements.

For all practical purposes, it is a secret mansion.

That secrecy raises questions about whether Bush violated state ethics laws — his campaign says he has not — or if he’s just found a loophole you can drive a Texas-sized pickup through.

Under Texas law, candidates must disclose a “beneficial interest” in real estate, along with any loans over $1,000. But it’s not clear if those obligations apply to the kind of trust the Bushes set up. Bush aides say they don’t, and an official at the Texas Ethics Commission said the agency apparently has not yet encountered this type of scenario.

“I’m not aware of any opinions from the commission specifically addressing these facts,” said Ian Steusloff, general counsel at the Ethics Commission. “Whether that constitutes a beneficial interest would depend on the facts. Every case is different.”

In a written statement, Bush’s political director Ash Wright dismissed any reporting on Bush’s private trust and the undisclosed $850,000 loan as “another absurd fake news story from the liberal media” — though errors discovered by The Texas Tribune later prompted the campaign to promise that Bush will amend his ethics filings.

Wright said Bush put the house in a trust to prevent disclosure of his address in county property records — for his family’s personal safety.

Longtime ethics lawyer Buck Wood, who helped draft the bill that produced the personal financial disclosure requirement in Texas, said failing to reveal major assets and loans at the very least violates the spirit of state ethics law. He said requiring the disclosure of financial ties between political benefactors and officeholders was one of the main goals of the watershed 1973 ethics reforms.

It was a debate animated by the abuses of the 1971 Sharpstown Scandal, which featured allegations of financial misconduct by the Democrats who dominated Texas politics at the time.

“This is the root cause of the problem that we passed the ethics bill for in the first place. It was to find out if you’ve got conflicts of interest,” said Wood, a Democrat. “You have a financial relationship that’s involving hundreds of thousands of dollars with somebody who is interested in what goes on in your office, yet you don’t have any idea how this is being financed?”

Wood said if Bush’s interpretation of the ethics law is correct — that the assets and liabilities of such trusts don’t have to be disclosed — other politicians will follow his lead.

“Everybody will start doing this,” Wood said.

Bush campaign spokesman Lee Spieckerman said Bush and his wife are both the creators and the beneficiaries of the trust. He said keeping the trust, the house and its financing arrangement private is allowed under state ethics law.

“The whole reason behind the [personal financial statement] is to show any potential conflicts of interest that might affect an officeholder’s discharging of his/her official duties,” Spieckerman said in an email. “The Bush home obviously doesn’t pose such a conflict.”

Steele, the donor and bank owner, said he had no involvement with or connection to Bush’s trust. A six-figure donor to the 2016 effort to get Bush’s father, Jeb Bush, elected president, Steele said he considered the Bush family to be friends.

“Very sweet people. I count it a privilege to have gotten to know the whole family over the years,” Steele said. “I hope they consider me a friend to them as well.”

A Tyler businessman and board chairman of American State Bank in Arp, Texas, Steele has given George P. Bush’s campaign more than $100,000 in cash and in-kind donations, including numerous trips on his private plane and a $32,000 in-kind donation to hire country singer Joe Nichols for a 2014 election-night party.

He said that because of privacy laws and the threat of fraud against consumers his bank does not “divulge anything about our customers” and therefore he couldn’t talk about any loans his bank may or may not have made to the nephew of former President George W. Bush.

Steele confirmed that Amanda Bush was a senior vice president and non-equity partner at one of his companies, Steele Resources. George P. Bush disclosed his wife’s employment at Steele Resources on the personal financial statement covering the 2015 calendar year but failed to report it for 2016 even though she worked at Steele Resources most of that year.

"Thank you for pointing out this error!" Spieckerman, the Bush spokesman, wrote in a follow-up email. "We inadvertently left Steele Resources off of the 2016 PFS and will amend." Bush will also amend his reports to add three nonprofit boards related to oversight of the Alamo, Spieckerman said.

Bush's campaign noted that former Land Commissioner Jerry Patterson, his GOP opponent, also left off an Alamo-related nonprofit from his disclosures when he was at the helm of the General Land Office. Patterson acknowledged the error and said, "I'll fix it."

Bush’s home, nestled on a cul-de-sac in one of the most exclusive neighborhoods in Austin, was most recently valued on county tax rolls at $1.5 million. Described in a real estate listing as a home with “Mexican flair” boasting “city views,” the house has a Spanish tile roof, four bedrooms, three and half baths and a three-car garage.

Once the Tribune found out the land commissioner lived in the tony abode, the connection to Steele’s bank could be found in county property records; Steele's campaign contributions to Bush and other candidates are a matter of public record.

The Tribune asked his campaign why the land commissioner took such elaborate steps to block the disclosure of his home address from county tax rolls in the first place. People with his military background — Bush served as an intelligence officer in Afghanistan in 2010 — can request confidentiality by filling out a simple form and checking the appropriate box.

Spieckerman said the family has received “suspicious packages” in addition to death threats and wanted confidentiality for both their home and their rental property, not only to protect themselves but also their tenants.

So Bush created the trust for the home property and has used the exemption for former soldiers in combat zones to keep an Austin rental property valued at $388,000 — in the Caswell Lofts overlooking Pease Park — off the Travis County Appraisal District’s online database since January of 2015. By law, though, the exemption only applies to a person’s home address.

After the Tribune inquired under freedom of information laws why the rental property's ownership had been deemed confidential, the appraisal district abruptly informed Amanda Bush on Feb. 7 that it would rescind the exemption she had applied for — and got — a little over two years ago.

“Dear Mrs. Bush, in responding to a request for public information it came to our attention that confidential protection was erroneously granted to your property,” county officials wrote. “We are removing the confidential protection from the property as it is not your home address as required by Section 20.025 of the Texas Property Tax Code.”

Jerry Patterson and the Texas General Land Office have been financial supporters of The Texas Tribune, a nonprofit, nonpartisan news organization that is funded in part by donations from members, foundations and corporate sponsors. Financial supporters play no role in the Tribune's journalism. Find a complete list of them here.