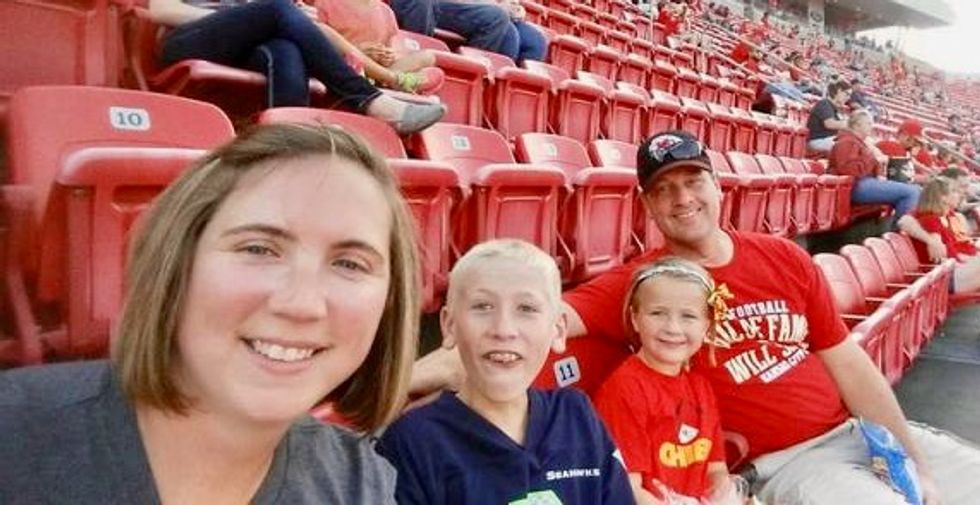 Amy Marie Sharp poses for a selfie, with her son Sterling, daughter Adriana and husband Kevin, in this picture uploaded to Facebook on August 22, 2015. Amy Sharp via REUTERS

An Iowa family of four on vacation in Mexican seaside resort was found dead inside a condominium, but foul play was not suspected, authorities and a family member said on Friday.

The bodies of Kevin Sharp, 41, his 38-year-old wife Amy, and their children Sterling, 12, and Adrianna, 7, of Creston, Iowa, were discovered by authorities in Akumal, Mexico, the Iowa city’s police department said in a statement.

Akumal, a small coastal resort on the Yucatan Peninsula about an hour south of Cancun in the Riviera Maya, is known for its white sand beaches and warm-water bay.

Ashli Peterson, a relative, posted on Facebook on Thursday night that the family was not on their scheduled Wednesday flight from Cancun to St. Louis, Missouri.

On Friday, she confirmed the family was deceased.

“There was no foul play! At this time that is all the information we have,” she wrote.

Relatives went to police in Creston early on Friday to report the family had not returned from their vacation, the police said.

Police then contacted the U.S. State Department, and Mexican authorities found the bodies after checking on the family.

There were no signs of violence, the attorney general’s office for the state of Quintana Roo said on Twitter.

A spokeswoman for the attorney general’s office said by phone that autopsies could be completed as soon as Friday night.

Creston police spokesman Mark Williams said he could not confirm reports that a gas leak was being investigated as a possible cause for the deaths.

The U.S. Embassy in Mexico City confirmed the deaths in a written statement. “Out of respect for the family during this difficult time, we have no further comment.”

Kevin Sharp was a stock car driver who raced at the Adams County Speedway in Corning Iowa, according to Luis Avila, the track’s president.

“He did it all for quite a few years: he raced, he promoted the place, and you couldn’t ask for anybody to do anything more for the race track,” Avila said by phone.

Reporting by Keith Coffman in Denver and Dave Graham and David Alire Garcia in Mexico City; Editing by Richard Chang