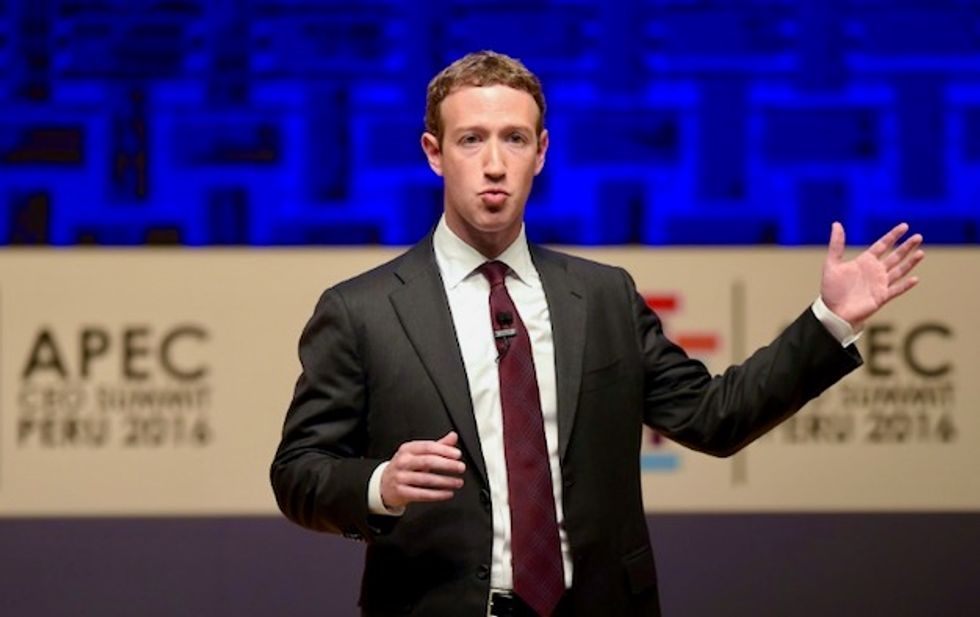 Facebook CEO and chairman Mark Zuckerberg, seen at a 2016 APEC summit in Peru, is likely to be grilled over privacy issues in two congressional hearings AFP/File / Rodrigo BUENDIA

Amid a firestorm over Facebook's data privacy scandal, Mark Zuckerberg appears before US lawmakers this week with mounting pressure for new regulations for social media platforms.

The 33-year-old chief executive is expected to face a grilling before a Senate panel Tuesday, and follow up with an appearance in the House of Representatives the following day.

His appearance comes amid a raft of inquiries on both sides of the Atlantic following disclosures that data on 87 million users was hijacked and improperly shared with Cambridge Analytica, a British political consultancy working for Donald Trump's presidential campaign.

"We need a privacy bill of rights that all Americans can rely upon."

Representative Ro Khanna, a California Democrat, agreed that legislation is needed "to protect Americans' dignity and privacy from bad faith actors like Cambridge Analytica, who use social media data to manipulate people."

Khanna tweeted that "self-regulation will not work. Congress must act in the public interest to protect consumers and citizens."

Several lawmakers and activists believe the United States should follow the lead of Europe's data protection law set to be implemented in May, which has strict terms for notification and sharing of personal data online.

Zuckerberg told reporters Facebook would follow the European rules worldwide, although cautioned that its implementation may not be "exactly the same format" for various countries and regions.

Facebook meanwhile announced Friday it will require political ads on its platform to state who is paying for the message and would verify the identity of the payer, in a bid to curb outside election interference.

The change is meant to avoid a repeat of the manipulation efforts by Russian-sponsored entities which sought to foment discord in 2016, and also responds to criticism about anonymous messages based on Facebook profile data.

Zuckerberg said the change will mean "we will hire thousands of more people" to get the new system in place ahead of US midterm elections in November.

"We're starting this in the US and expanding to the rest of the world in the coming months," Zuckerberg said on his Facebook page.

"These steps by themselves won't stop all people trying to game the system. But they will make it a lot harder for anyone to do what the Russians did during the 2016 election and use fake accounts and pages to run ads."

Zuckerberg said Facebook is now endorsing the "Honest Ads Act," a bill that would require disclosure of the sources of online political ads.

"Election interference is a problem that's bigger than any one platform, and that's why we support the Honest Ads Act," he said. "This will help raise the bar for all political advertising online."

Some activists say Facebook needs to do more to guard against manipulation and deception on the platform.

Facebook "should really be turning their attention not only to election ads but to all ads," said Harlan Yu of the technology and social justice nonprofit group Upturn.

"They should disclose to the public a detailed accounting of all the bad ads they're taking down," Yu told a forum Thursday at the New American Foundation.

Facebook is also likely to face questions on whether it violated a 2011 agreement with the US Federal Trade Commission. Activists have alleged the social network failed to live up to promises to protect privacy.

But Vladeck noted that a major problem with Facebook's privacy woes comes from its failure to get written contracts and guarantees with third parties such as app developers.

"It seems that Facebook made no effort to establish the (credential) of developers, much less verify or audit what user data app developers actually harvested and shared," Vladeck said.

Some analysts fear that Zuckerberg's appearance on Capitol Hill will be little more than a public relations exercise.

"Zuckerberg's dance before Congress will be delicate, and I'll bet that even a brainiac like him will have a damp shirt under his very nice suit coat not long into it," said Roger Kay, an analyst and consultant with Endpoint Technologies Associates.

"But in the end, he'll agree to some meaningless adjustments to how Facebook operates just to get out of there in one piece."