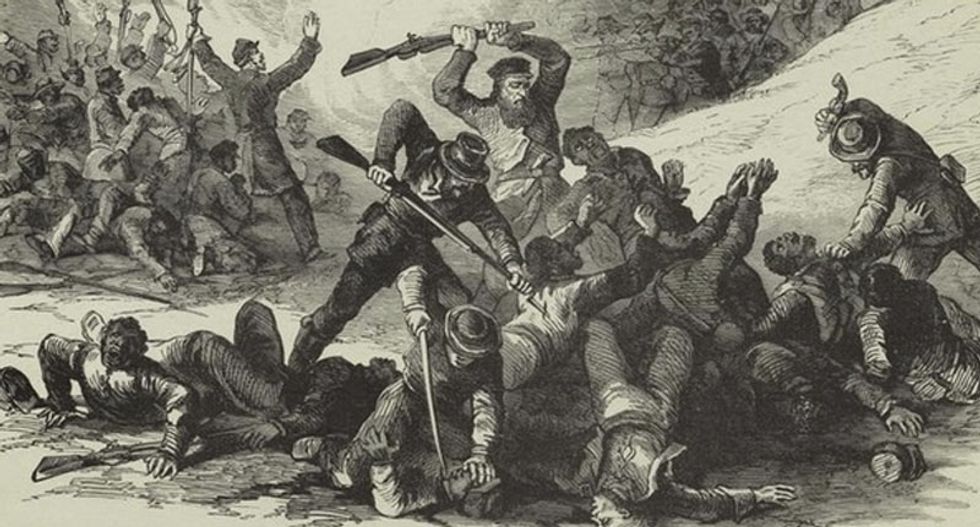 The war in Tennessee : Confederates massacre Union soldiers after they surrender at Fort Pillow, April 12th, 1864.

April 12 is the 154th anniversary of the Civil War battle and massacre at Fort Pillow, located on the Mississippi River near Henning, Tennessee. It was a strategic location, held by United States (Union) forces just north of Memphis and controlling river access to and from St. Louis and the Ohio River Valley.

On April 16, 1864, the New York Times reported that rebel forces under the command of General Nathan Bedford Forrest, after twice using a “flag of truce” to maneuver prior to attack, overwhelmed defenders. After taking the fort, “the Confederates commenced an indiscriminate butchery of the whites and blacks, including those of both colors who had been previously wounded.” Black women and children in the fort were also slaughtered. “Out of the garrison of six hundred, only two hundred remained alive.” In the same issue, the Times published an account of events from a “correspondent of the Union, who was on board the steamer Platte Valley at Fort Pillow.” This correspondent “gives even a more appalling description of the fiendishness of the rebels.”

“On the morning after the battle the rebels went over the field, and shot the negroes who had not died from their wounds . . . . Many of those who had escaped from the works and hospital, who desired to be treated as prisoners of war, as the rebels said, were ordered to fall into line, and when they had formed, were inhumanly shot down. Of 350 colored troops not more than 56 escaped the massacre, and not one officer that commanded them survives.”

The Black soldiers who were butchered in cold blood by the Confederate troops were regularly enlisted in the Union army, were in full uniform, and were defending the United States flag.

General James Ronald Chalmers explained to the Times correspondent that the Confederate troops were following orders. It was official policy to kill wounded Black Union soldiers and anyone who surrendered, as well as White officers who served with Black troops.

In battle dispatches, General Forrest wrote, “The river was dyed with the blood of the slaughtered for two hundred yards. The approximate loss was upward of five hundred killed, but few of the officers escaping. My loss was about twenty killed. It is hoped that these facts will demonstrate to the Northern people that negro soldiers cannot cope with Southerners."

In response to the massacre, Congress passed a joint resolution demanding an official inquiry, Secretary of War Edwin Stanton initiated a military investigation, and Abraham Lincoln ordered General Benjamin Butler, who was negotiating prisoner exchanges with the Confederacy, to demand that captured Black soldiers be treated the same as White soldiers, a demand that Confederate negotiators rejected.

An enraged Lincoln issued a resolution that for every “soldier of the United States killed in violation of the laws of war, a rebel soldier shall be executed,” but it was never been implemented.

Black lives mattered, at least publicly, for about a month, and then the incident was forgotten. There was never a federal response even though the massacres did not stop. In July 1864, Confederate forces under the command of General Robert E. Lee at the Battle of the Crater in Virginia massacred Black United States soldiers who were trying to surrender.

In 2016, the Southern Poverty Law Center, in an admittedly incomplete list, identified over fifteen hundred Confederate “place names and other symbols in public spaces” in the United States. Lee’s legacy, status and statues have continually been debated. We are now witnessing an attempt to correct history that includes removing some of the monuments that honor Confederate leaders and the Confederacy in general, including Robert E. Lee.

After the Civil War, Nathan Bedford Forrest helped found, and then served, as the first Grand Wizard of the Ku Klux Klan in its campaign to terrorize newly emancipated Southern Blacks into submission. Astoundingly, there are still Forrest monuments and memorials across the South, including a bust in the state capital of Tennessee and a Forrest County in Mississippi. A monument in the Oak Cemetery in Selma, Alabama, describes Forrest as “Defender of Selma, Wizard of the Saddle, Untutored Genius, The first with the most.”

The effort to portray the Civil War as somehow a glorious “Lost Cause” dates back to the 1890s campaign for Jim Crow laws, the legalization of racial segregation, and the lynching of Black men in the South to terrorize people into acceptance of second-class citizenship. It was promoted by the United Daughters of the Confederacy (UDC), their children’s auxiliaries, Children of the Confederacy, and the United Confederate Veterans (UCV).

A major part of their campaign to rewrite history was pressuring textbook companies and libraries to purge books that “calls a Confederate soldier a traitor, a rebel and the war a rebellion; that says the South fought to hold her slaves; that speaks of the slaveholder as cruel or unjust to his slaves; that glories Lincoln and vilifies Jefferson Davis.”

The American Civil War was not a glorious lost cause. It was a war by the South to preserve slavery. The Civil War was not an unfortunate battle between brothers – Southern Whites never considered Blacks or their White supporters to be their brothers.

“Remember Fort Pillow!” became a battle cry for Black troops in the United States Army for the rest of the Civil War. As the United States confronts the legacy of discrimination and continuing police violence against Black Americans, and debates removing statues and renaming places honoring racists and traitors, this country needs to once again “Remember Fort Pillow!”

Alan Singer, historian, is a Professor of Education at Hofstra University, and the author of the forthcoming book, New York’s Grand Emancipation Jubilee (SUNY Press). Follow Alan Singer on Twitter.