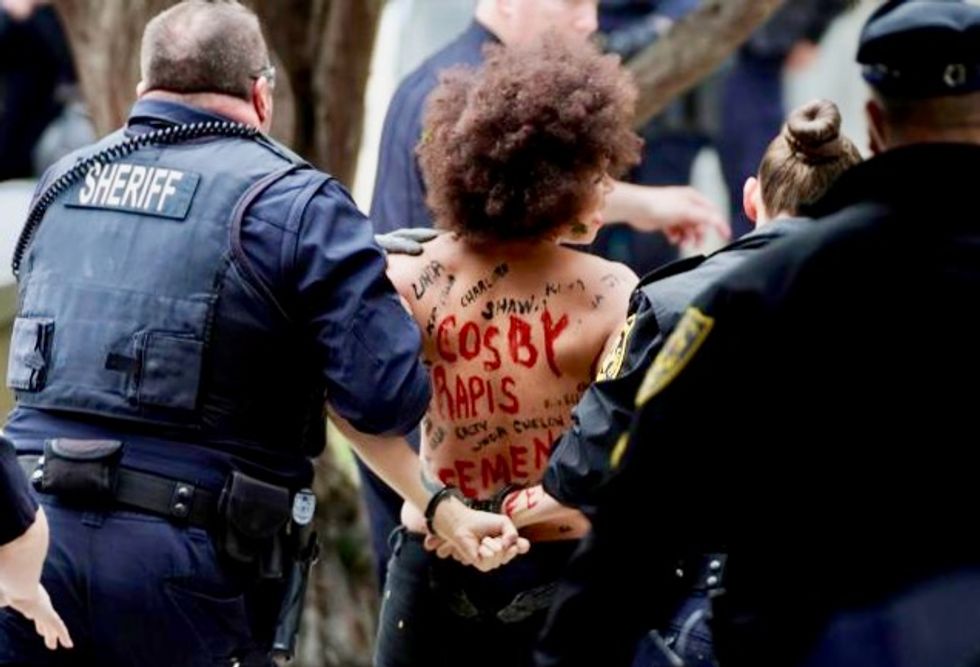 A protester is escorted out by the the police after breaking through the barriers, as actor and comedian Bill Cosby arrives for the first day of his sexual assault retrial at the Montgomery County Courthouse in Norristown, Pennsylvania, U.S., April 9, 2018. REUTERS/Jessica Kourkounis

A former “Cosby Show” actress stripped off her top and confronted comedian Bill Cosby as he returned to a Pennsylvania court on Monday for the start of his retrial on sexual assault charges, and she was quickly wrestled to the ground by police.

As Cosby walked toward court, accompanied by two publicists and a police escort, Nicolle Rochelle climbed over a barrier and began shouting. The words “Women’s Lives Matters” and the names of Cosby’s accusers were written in red and black lettering on her bare torso.

Uniformed officers wrestled her into the bushes and onto the ground as Cosby’s entourage followed a few steps behind. After a minor delay, he proceeded into court where opening arguments were due to take place after pretrial issues were resolved.

Rochelle was charged with disorderly conduct and could be fined if convicted, the Montgomery County District Attorney’s Office said in a statement.

Rochelle, 39, of Little Falls, New Jersey, appeared in four episodes of “The Cosby Show” from 1990 to 1992, playing the characters Danielle and Davina while credited as Nicole Leach. She used that name for acting credits until changing it about a decade ago, according to the show business data base IMDb.com.

The international women’s movement Femen claimed responsibility for organizing the protest, saying in a statement that Rochelle was one of its activists.

Cosby, 80, played the witty and beloved patriarch on television’s “The Cosby Show,” becoming known as “America’s Dad.” He has since fallen from grace.

The accuser in the case, Andrea Constand, 44, is one of more than 50 women who have accused Cosby of sexual assaults, some dating back decades. Cosby has said the encounters were consensual.

Constand’s case, dating to 2004 when she was an administrator at Temple University, Cosby’s alma mater, is the only one to go to criminal trial.

If convicted of aggravated indecent assault, Cosby could face up to 10 years in prison.

The trial is expected to last about a month at Montgomery County Courthouse in Norristown, Pennsylvania, a Philadelphia suburb. A seven-man, five-woman jury was selected last week.

In June, the first jury failed to come to a unanimous verdict on charges that Cosby drugged and assaulted Constand at his home outside Philadelphia in 2004. Judge Steven O’Neill declared a mistrial.

The retrial unfolds against the backdrop of the national #MeToo movement. A parade of women have ended years of silence to tell their stories of sexual misconduct and assault by powerful men in Hollywood, politics and business.