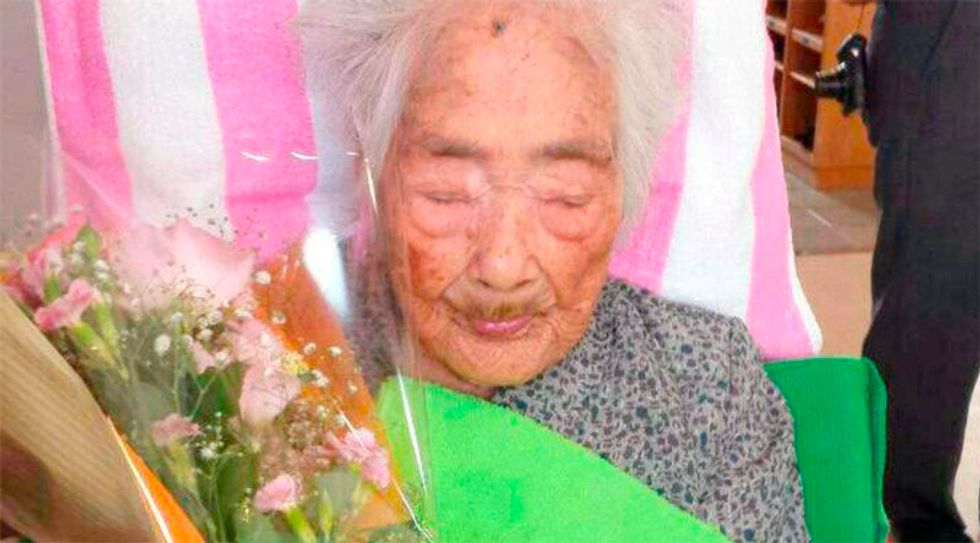 Nabi Tajima, born in 1900, holds a bouquet in Japanese southwestern island of Kikaijima, Kagoshima Prefecture, Japan, in this photo taken in 2015 and released by Kyodo. Mandatory credit Kyodo/via REUTERS

A Japanese woman born in the final year of the 19th century and believed to have been the world’s oldest person died on Saturday, Kyodo news agency said. She was 117.

Nabi Tajima, born in 1900, died from old age at a hospital on her native southwestern island of Kikaijima, Kyodo said.

Guinness World Records had been conducting research with a view to certifying Tajima as the oldest person alive after the previous record holder, Violet Brown of Jamaica, died last year at 117, Kyodo said.
The organization recognized a 112-year-old Japanese man, Masazo Nonaka, as the world’s oldest man earlier this month.
In Japan, the number of centenarians totaled 67,824 last year, government data shows, up sharply from 153 in 1963.
Report typos and corrections to: corrections@rawstory.com.
READ COMMENTS - JOIN THE DISCUSSION