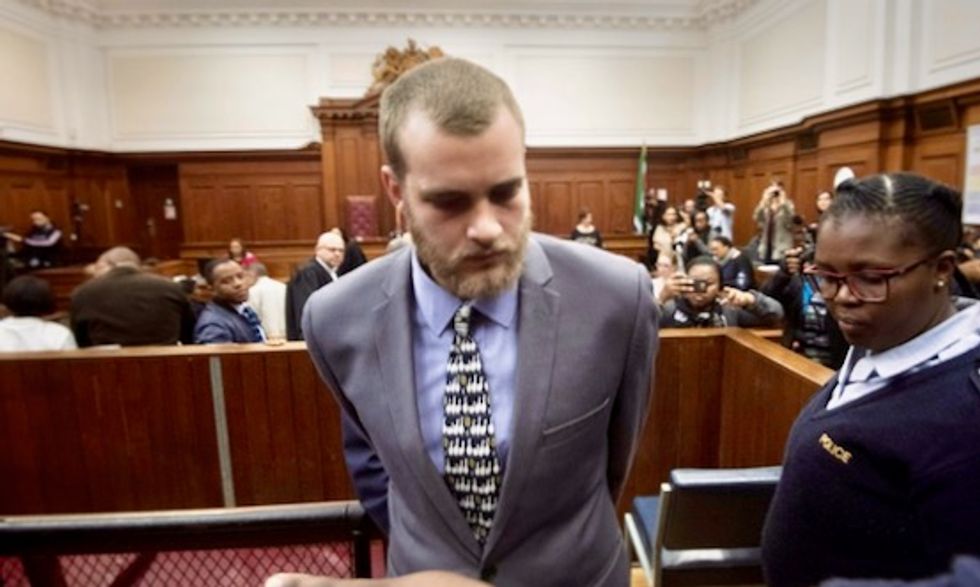 Van Breda was handcuffed after receiving triple life terms for the murder of his parents and brother. He was also handed a 15-year sentence for maiming his sister AFP / RODGER BOSCH

A young South African man convicted of slaying his wealthy parents and brother and maiming his sister in a frenzied axe attack was handed three life sentences on Thursday.

"Each murderous attack on a family member is a severe crime and warrants the severest punishment," Desai told the packed Western Cape High Court in Cape Town after the headline-making trial.

Van Breda, who wore a light grey suit, blue shirt and patterned tie, was also jailed for 15 years for the attempted murder of his sister.

After a trial that had sought in vain to understand the motive for the bloodbath, Van Breda remained emotionless as the sentence was handed down.

He was then led away by court officers as his girlfriend watched from the public gallery.

He had denied murdering his 21-year-old brother Rudi and parents Martin, 54, and Teresa, 55, and leaving his sister Marli struggling with near-fatal injuries to her head, neck and throat after the bloody attack.

"They were attacks involving a high degree of uncontrolled violence. The victims were unarmed (and) they faced an axe-wielding son or brother, probably not expecting the worst," said Desai.

"We have heard no explanation... you have shown no remorse."

The trial generated global interest in how a privileged son unleashed such a brutal attack on his family, whose fortune -- estimated at $16 million (13.6 million euros) -- was derived from property.

The family had moved to Australia many years ago before returning to South Africa in 2014.

Van Breda was convicted of three counts of murder, one of attempted murder and one of obstructing justice on May 21 with the judge describing the verdict as "inescapable".

Defence lawyer Pieter Botha had called for a "merciful" sentencing, arguing that Van Breda was a first-time offender who was "barely 20" when he killed his family.

- 'Sheer seriousness of these crimes' -

He said Van Breda had been in counselling for six months, was "appropriately emotional" when the murders were mentioned, and was taking medication for depression and epilepsy.

Since his conviction Van Breda has been held in the medical wing of South Africa's notoriously violent Pollsmoor prison.

During the trial, Van Breda had told the court that a late-night intruder had entered the family's luxury residence on the ultra-secure De Zalze Golf Estate in Stellenbosch, outside Cape Town.

His claim had echoes of the defence used by Oscar Pistorius, who said he thought a burglar was hiding in an ensuite bathroom to explain why he fired four times through the door, killing his girlfriend Reeva Steenkamp.

But judge Desai systematically took apart the defence case in a five-hour summary of the trial -- and then read a verdict that he said "as a family man, it's difficult" to deliver.

Van Breda himself suffered superficial stab wounds which he said were caused while wrestling with the attacker who was trying to slit his throat. He said he then fell unconscious.

Prosecutors insisted the wounds were self-inflicted and Desai said the axe used in the attack was kept in the house prior to the killings.

Van Breda's motive has remained a mystery and judge Desai pleaded with his defence team to share the true story.

"I'm searching for some human factor that to some degree diminishes the sheer seriousness of these crimes," said Judge Desai at a hearing on Tuesday.

"There must be something... I'm appealing to (him) -- put before me some reason for these attacks."