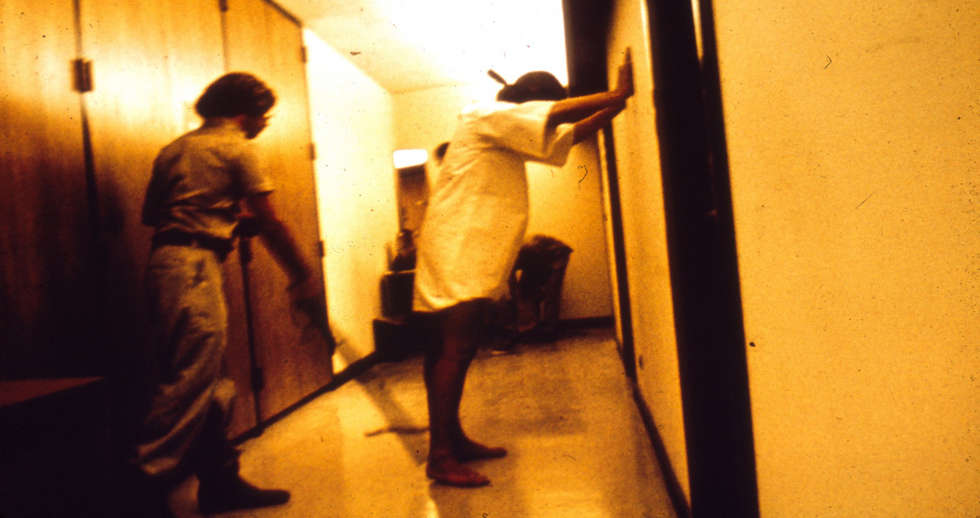 A "guard" beats an "inmate" with a baton during the Stanford Prison Experiment. Image via the Stanford prison experiment official website.

In August of 1971, psychologist Phillip Zimbardo conducted the Stanford prison experiment — a study that became known as the seminal trial on human nature and cruelty. But a new exposé reveals that some of the study's main findings appear to be based on lies.

Based on previously unpublished audio and admissions from participants, Vox reported that the world-famous experiment's findings are not just incorrect, but were gathered and publicized using deceit.

In the experiment, Zimbardo, then a young psychology professor at Stanford, commissioned 18 college-aged men to play as "guards" and "prisoners" of the fictional Stanford County Jail. Slated to last two weeks, the experiment was shut down after a mere six days when, as writer Ben Blum notes, "Zimbardo’s girlfriend stopped by six days in and witnessed the conditions" of the mock jail.

The results of the experiment — extreme cruelty from the guards and psychological breakdowns from the prisoners — were supposedly spontaneous. Blum's interviews, however, suggest otherwise.

In one infamous example captured via audio recording, then-21-year-old "prisoner" Douglas Korpi has a breakdown that became the stuff of psychology textbook legends.

"I mean, Jesus Christ, I’m burning up inside!” Korpi, wearing a smock that read "8612," yelled. “Don’t you know? I want to get out! This is all f*cked up inside! I can’t stand another night! I just can’t take it anymore!"

As Korpi admitted to Blum in 2017, "anybody who is a clinician would know that I was faking.”

“If you listen to the tape, it’s not subtle," the famous experiment subject, now a forensic psychologist, told the writer in what was reportedly his first interview in years. "I’m not that good at acting. I mean, I think I do a fairly good job, but I’m more hysterical than psychotic.”

The guards, Blum noted, often gave performances more "lackluster" than Korbi's — except for Dave Eshelman, nicknamed "John Wayne" by the prisoners "for his Southern accent and inventive cruelty." Eshelman studied acting, and reportedly admitted readily that his accent was phony.

"I took it as a kind of an improv exercise,” Eshelman told Blum. “I believed that I was doing what the researchers wanted me to do, and I thought I’d do it better than anybody else by creating this despicable guard persona. I’d never been to the South, but I used a southern accent, which I got from Cool Hand Luke.”

The guard told Blum that Zimbardo even "thanked" him for his performance.

Richard Yacco, another of the experiment's subjects, claimed in an unreleased NBC interview that when he and other prisoners told researchers they wanted to leave the experiment, they were told they couldn't. Zimbardo initially denied the claim, but when Blum presented him with newly-unearthed transcripts published by French academic Thibault Le Texier that exposed him and another staffer discussing the conditions on which participants could leave, he backtracked.

"An interesting thing was that the guys who came in yesterday, the two guys who came in and said they wanted to leave, and I said no,” Zimbardo told his staff at the time. “There are only two conditions under which you can leave, medical help or psychiatric… I think they really believed they can’t get out."

The psychologist went on to explain that participants would only be released via a "safe" phrase — "I quit the experiment" — and that they signed contracts agreeing to those conditions. But the informed consent forms from the experiment that Zimbardo put on his website "contain no mention" of that phrase.

"Zimbardo’s standard narrative of the Stanford prison experiment offers the prisoners’ emotional responses as proof of how powerfully affected they were by the guards’ mistreatment," Blum wrote. "The shock of real imprisonment provides a simpler and far less groundbreaking explanation."