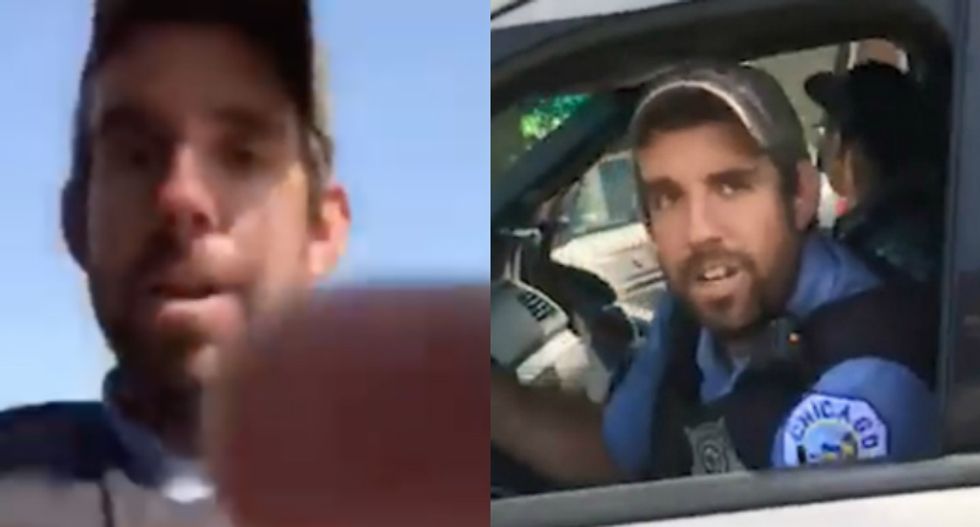 A Chicago police officer who is now under investigation for making violent comments towards a group of black men. (Images via screengrab.)

An unnamed Chicago police officer is under investigation after a social media video of him saying he likes to "kill motherf*ckers" went viral.

Chicago's Fox 32 reported that the city's Civilian Office of Police Accountability opened an investigation into the officer after a social media user filmed the officer in full uniform making violent comments to the person recording.

"I kill motherf*ckers," the officer, who was in an unmarked car, is heard saying in the beginning of the video before telling the person recording to not film him and suggesting he may arrest him for "walking illegally" in the street.

The officer then denied that he made the comment about killing people before telling the man recording that he doesn't "give a f*ck."

After driving down the block slowly in pursuit of the man recording, the officer then got out and began following him and his friends on foot, telling them that "Illinois is a two-party consent state and I don’t consent to you recording me."

As he got closer to the group of young black men, the officer accused the person recording of hitting his shoe and appeared to goad them, suggesting the group call his sergeant. He then told the young man to get out of his way and tried to grab his phone.

You can watch the interaction below:

The online platform Rumble hired Robert Barnes, one of Jones' longtime defamation attorneys, in June to oversee changes to the site's moderation rules, and the changes he approved with the site's content producer David "Viva Frei" Freiheit would roll back bans on material that supports or incites extremist groups, reported The Daily Beast.

Over the past several weeks, Americans have learned that the Trump-appointed inspector general at the Department of Homeland Security, Joseph Cuffari, is facing pressure over erased Secret Services text messages. He has been accused of refusing to release documents, blocking interviews, and delaying the probe into the Secret Service.

According to a new report from The Revolving Door Project, a watchdog group at the Center for Economic and Policy Research (CEPR), Cuffari is just a small part of the leftover Trump loyalists who are still influencing President Joe Biden's government. At the same time, the search warrant at Mar-a-Lago helped further highlight the culture of the obstruction of justice through document destruction.