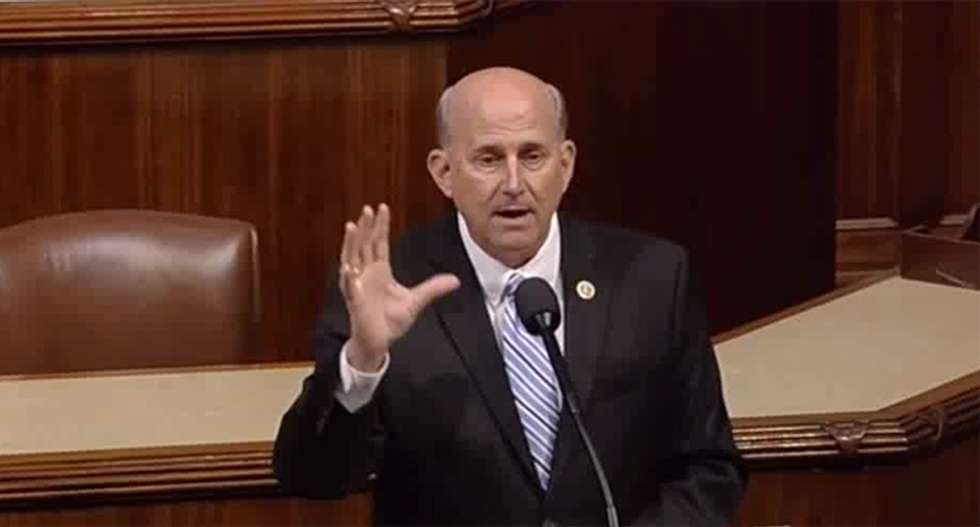 On Thursday, Congressman Louie Gohmert (R-TX) seemed to lose it while questioning FBI agent Peter Strzok, demanding to know whether Strzok had lied to his wife.

"I can't help but wonder when I see you looking there with a little smirk how many times did you look all innocent in your wife's eyes and lie about Ms. Page" he yelled to know, before getting shouted down by Democrats.

I did not think it possible anyone could make Peter Strzok seem a sympathetic figure in this hearing, but Louie Goh… https://t.co/WTzMOsUHIJ
— Brit Hume (@Brit Hume) 1531426004.0

Attention! Louie Gohmert is frothing at the mouth like a rabid animal. Would someone please administer his Rabies… https://t.co/6VIKFmF0gV
— SarahCA (@SarahCA) 1531426066.0

And Gohmert takes the House Republicans to a whole new low, especially considering who the leader of their party is.
— Joyce Alene (@Joyce Alene) 1531422975.0

If you're just tuning in, Louie Gohmert just attacked Peter Strzok for cheating on his wife, in the context of defe… https://t.co/VqItpXFeLp
— John Fugelsang (@John Fugelsang) 1531423634.0

Gohmert’s idea of sexual morality: He campaigned for Roy Moore after Moore was outed for preying on teenage girls.… https://t.co/t9fqq7gCGI
— Will Saletan (@Will Saletan) 1531423843.0

Strzok responds to @replouiegohmert, saying he has not lied, suggests the slap at him cheating on his wife (referen… https://t.co/TONEvHokeK
— Jake Tapper (@Jake Tapper) 1531422905.0

Rarely seen a more cowardly act than Rep. Gohmert attacking a witness personally and then trying to get the chairma… https://t.co/1L4myZZui7
— Ryan Lizza (@Ryan Lizza) 1531422888.0