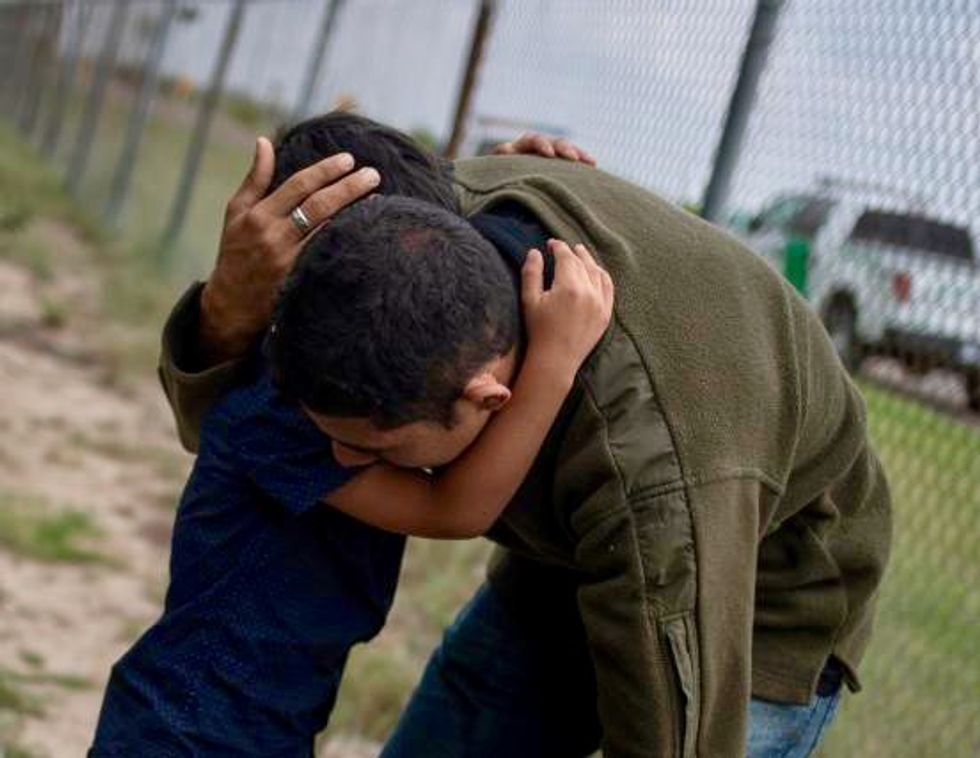 FILE PHOTO: A four-year-old boy weeps in the arms of a family member as he and others were apprehended by border patrol agents after illegally crossing into the U.S. border from Mexico near McAllen, Texas, U.S., May 2, 2018. REUTERS/Adrees Latif

During their detention last month in a U.S. Customs and Border Protection facility in Laredo, Texas, Karen and her two young sons were constantly cold. The family, which fled violence in Honduras, slept on a hard floor in a holding cell without mattresses, she said, their clothes still wet from crossing the Rio Grande.

“I can only hold one at a time to keep them warm. Whoever I am not holding is cold,” she said in one of more than 200 sworn statements filed this week in a long-running lawsuit challenging conditions for children in immigration custody.

The statements, which were taken in June and July and identify immigrants only by their first names, provide a rare window into life in Customs and Border Protection (CBP) facilities. Migrants like Karen and her children who crossed into the United States illegally, as well as those who applied for asylum at the border, are often held in such facilities before being released or transferred to longer-term detention centers.

A nursing mother named Serafin, who said she fled Mexico after a cartel member threatened to rape her and kill her baby, said she was given too little food at a facility in San Ysidro, California.

“I am not producing enough breast milk to feed my baby because I am not eating enough,” she said in her statement. “My daughter cries a lot because she is hungry.”

A woman named Mayra said her 9-year-old son became fearful after their detention in Nogales, Arizona, where he saw children separated from their parents.

“He saw someone bound with chains and asked me whether I would be chained in the same way,” she said. “He wonders when we will get to the United States. I do not tell him that we are already here. He wouldn’t believe that the United States would treat us this way.”

The statements were taken by attorneys for plaintiffs in a case brought against the U.S. government in 1985 on behalf of 15-year-old Jenny L. Flores. A 1997 settlement in the lawsuit set standards for humane treatment of children in detention and ordered their prompt release in most cases.

This week, the plaintiffs filed papers alleging that the detention conditions described in the declarations violate the humane treatment standards set out in the settlement, including speedy release of children.

“We now see many in CBP custody for three to six days,” up from two to three days in prior months, said Peter Schey, the lead attorney for plaintiffs in the Flores case.

Reuters was unable to speak directly to the migrants who gave declarations because they weren’t fully identified in the filing, and most of them are still in detention.

CBP referred requests for comment on the migrant statements to the Department of Justice, which declined to comment. In the past, CBP has defended conditions in its facilities.

In a report filed in the Flores case last month, CBP juvenile coordinator Henry Moak Jr. said that the department makes extensive efforts “to ensure all minors in CBP custody are treated with dignity, respect, and special concern for their particular vulnerability as minors.”

He said parents and children he interviewed had “received meals and snacks; had access to drinking water, functioning toilets, and functioning sinks; and were held in rooms that were maintained at an appropriate temperature.”

He also noted, however, that CBP should ensure that food was not kept past its expiration date and that custodial data was consistently entered into records.

Reports of harsh conditions in CBP facilities have surfaced repeatedly for years, including again recently when the government began separating children and parents. The new declarations are remarkable both for the number of detainee voices and the consistency of detail in what they report.

While a few immigrants said that conditions were adequate, most described cold temperatures, too little food, difficult separations from their children and crowded cells without enough sleeping mats. They said latrines were dirty and lacked privacy and that lights stayed on day and night.

James Tomsheck, who served as assistant commissioner of U.S. Customs and Border Protection for internal affairs from 2006 to 2014, told Reuters that the facilities were designed for brief stays.

“There is no question that the amount of time persons are being held at these, what are designed to be temporary detention facilities, has become much longer than it was intended.”

Detainees refer to some of the facilities as “hieleras,” Spanish for “ice boxes” because they are so cold. Larger spaces with indoor fencing are referred to as “perreras” or “dog pounds.”

Children in the facilities were often held in separate cells from their parents, according to the statements.

“The mothers tried to reach their children, and I saw children pressing up against the fence of the cage to try to reach out,” she said. “But officials pulled the children away and yelled at their mothers.”

John Sandweg, acting director of ICE from 2013 to 2014, said the problems stem from the fact that holding areas were designed to lock up adults for just a few hours while CBP processed paperwork.