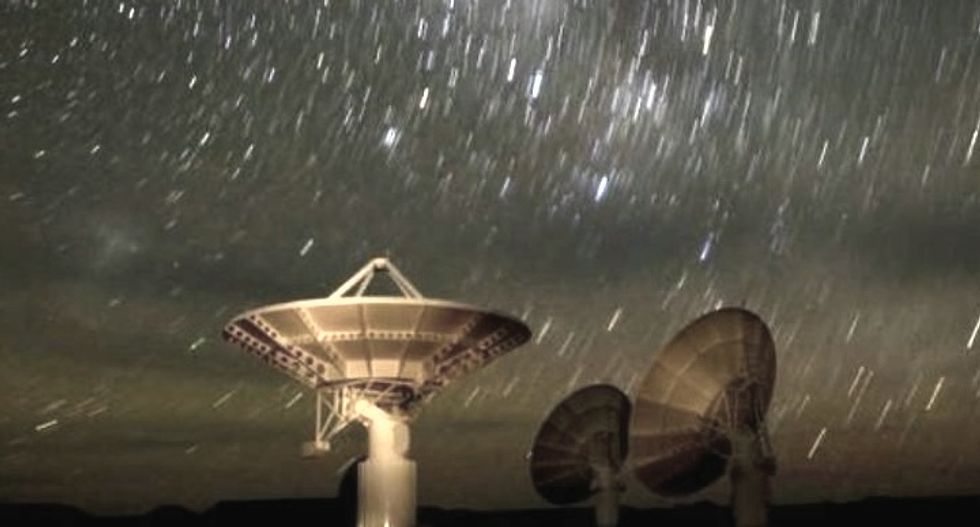 A scientific mega-project to unlock cosmic conundrums from dark energy to detecting extraterrestrial life was given a boost on Friday, when the 64-dish MeerKAT radio telescope was inaugurated in the remote South African town of Carnarvon.

Built at a cost of 4.4 billion rand, MeerKAT will be incorporated into the complex Square Kilometre Array (SKA) instrument, which when fully operational in the late 2020s would be the world’s biggest and most powerful radio telescope.

Up to 3,000 dishes co-hosted in Africa and Australia will then be able to scan the sky 10,000 times faster with 50 times the sensitivity of any other telescope and produce images that exceed the resolution quality of the Hubble Space telescope, scientists said of SKA.

“MeerKAT will address some of the key science questions in modern astrophysics – how did galaxies form, how are they evolving, how did we come to be here ... and for those purposes MeerKAT is the best in the world,” said Fernando Camilo, chief scientist at the South African Radio Astronomy Observatory which built and operates the telescope.

At an inauguration attended by government officials and foreign dignitaries, Camilo released new images taken by MeerKAT of the region surrounding the supermassive black hole at the centre of the Milky Way galaxy, some 25,000 light years away.

“We didn’t expect to use our telescope so early in the game, it’s not even optimized, but to turn it to the centre of the galaxy and obtain these stunning images, the best in the world, tells you you’ve done something right, better than right,” he told Reuters.

MeerKAT is a followup to the KAT 7 (Karoo Array Telescope), built in the vast semi-desert Karoo region north of Cape Town to demonstrate South Africa’s ability to host the SKA. Its name is a play on words: in Afrikaans “meer” means “more”, as in “more KAT”, but it also refers to the small mammal native to the Karoo and famed for standing on its hind legs to view the world.

Besides ground-breaking astronomy research, MeerKAT is also pushing boundaries in big data and high-performance computing with the likes of IBM (IBM.N) helping develop systems able to handle the dizzying amount of data fed from each individual antenna to supercomputers buried deep underground to limit radio interference.

The biggest radio telescope of its kind in the southern hemisphere, MeerKAT looks like a cluster of eggs when you first see it about an hour’s drive outside Carnarvon.

But up close, each sensitive dish is almost as high as a three storey building, rotating on a fixed pedestal as it scans the sky. Chosen because of its remoteness, with hills providing an extra shield against radio interference, the project site is the main African base for hundreds of antennae that will eventually be placed as far as Kenya and Ghana.

“The first phase of SKA 1 in South Africa is to add 133 antennas to that (of MeerKAT),” said Rob Adam, an SKA international board member.

The expansion is expected to start next year, said Adam, with the first prototype dish built in China already on site about 450 kilometers north of Cape Town in the Northern Cape province. MeerKAT will operate independently before being incorporated into SKA 1 sometime around 2023, Adam said.