Thai boys were sedated and stretchered from cave in dramatic rescue 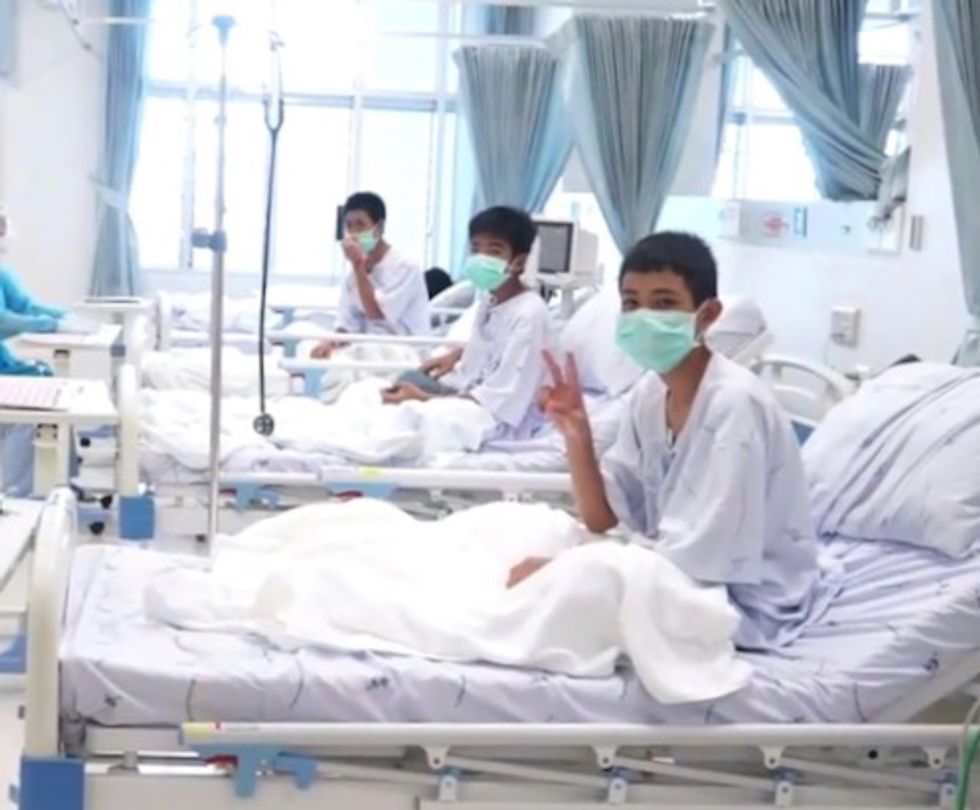 The 12 boys rescued from a Thai cave were sedated and passed on stretchers along the twisting, narrow passageways of the Tham Luang complex, a rescuer said Wednesday as the first footage emerged of an astonishing mission that has captivated the world.

The video of the rescue, which ended on Tuesday when the final four boys and their 25-year-old coach emerged from the cave, was released by authorities who had until late Wednesday closely guarded the details of the seemingly unprecedented operation.

Other video footage shows several of the boys in hospital, in quarantine and wearing face masks but seemingly in good health as they nod, wave and flash peace signs to the camera.

The nerve-shredding three-day operation ended on Tuesday when the final members of the "Wild Boars" were freed from the cave which had held them captive since June 23.

The rescue sparked jubilation with Thais heaping praise on the rescue team of foreign and local divers as the triumphant tagline "Hooyah" pinballed across social media.

But Thai authorities have been coy on how a group of boys, many of whom could not swim and none with diving experience, could have navigated the treacherous narrow and submerged passageways of the Tham Luang complex, even with expert diving support.

After days of mounting speculation, a former Thai Navy SEAL diver broke the silence, revealing the boys were sleeping or partially-conscious as they were passed from diver-to-diver through the cave.

"My job was to transfer them along," he said, adding the "boys were wrapped up in stretchers already when they were being transferred" and were monitored at regular intervals by doctors posted along the kilometres-long escape route.

He did not say if the coach, the only adult with the boys for nine days before they found, was able to dive and walk out unaided.

AFP / TANG CHHIN SothyThailand is celebrating the successful rescue of the Wild Boars, a young football team that became trapped in a flooded cave

Junta leader Prayut Chan-O-Cha on Tuesday said the boys had been given a "minor tranquiliser" to prevent anxiety during the complex extraction bid.

But he had denied they were knocked out for an operation the chief of the rescue had dubbed "mission impossible".

The rescue was fraught with danger, a point underscored last Friday by the death of a retired Thai Navy SEAL diver as he ran out of air in the flooded cave complex.

Then, with the final divers slowly exiting the cave on Tuesday, the pumps suddenly failed pushing the water level up towards head height in a previously wadeable section of the cave.

"If you didn’t use the water pump in that location, you could only come out with an oxygen tank," ex-SEAL Commander Chaiyananta said.

That left 20 or so divers scrambling to flee the rising waters, he said, explaining they narrowly made it out time.

It received blanket coverage in Thai media with newspaper The Nation running the headline "Hooyah! Mission accomplished" and the Bangkok Post emblazoned with "All Wild Boars saved".

AFP / TANG CHHIN SothyCommander Chaiyananta Peeranarong, a former Thai Navy SEAL who took park in the rescue operation, said the boys were passed "sleeping" on stretchers through the treacherous passageways

Despite spending days in the dark, dank, cave health officials said the boys -- who are aged 11 to 16 -- are in good physical and mental health and eating normal food.

"It might be because they were all together as a team," public health ministry inspector general Thongchai Lertwilairatanapong told reporters.

The saga of the "Wild Boars" gripped the world, with the lives of the group hanging in the balance as the threat of heavy rain injected urgency to an already perilous extraction bid.

Duangduen Sittiwongsa, a classmate of 16-year-old Pheeraphat "Night" Sompiengjai, whose birthday fell on the same day the team entered the cave, said they would give him cake when he came back to school.

"We will sing a song for him," she said.

Rescuers had weighed up several options to save the boys, including keeping them in the cave through the months-long monsoon season.

But they were prodded into the dangerous task of bringing the team through submerged chambers and claustrophobic passages as oxygen levels in the cave plummeted and rains menaced.

The group were taken out in three batches by a team of 13 international divers flanked by the Thai Navy SEALs, who greeted each successful rescue with a "Hooyah" on their Facebook page.

That sign off quickly turned into a hashtag shared across social media, where luminaries of business, politics and sport extended their best wishes to the team and the rescuers.