WATCH: White Chicago racist gets punched out after N-word tirade at crowd waiting for train 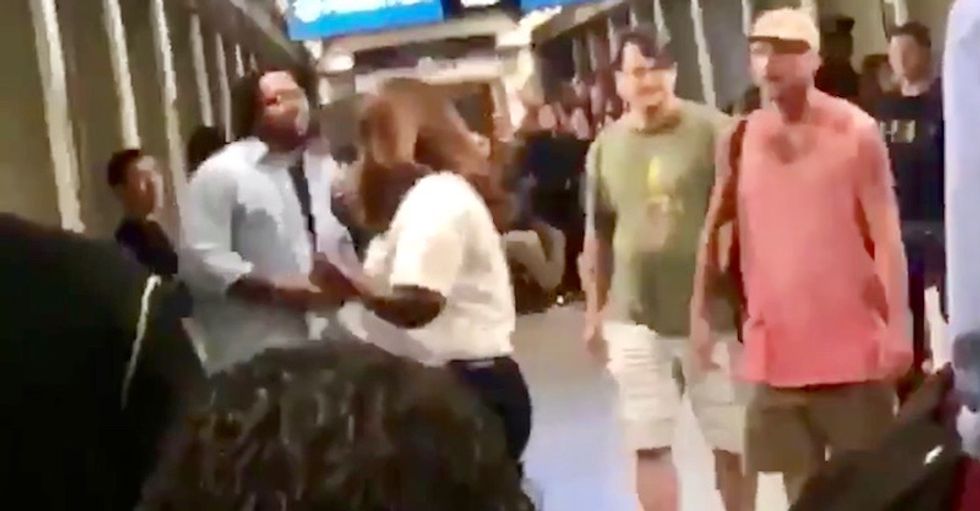 A racist white man in Chicago allegedly hurled racial abuse at the wrong black man on a Chicago train, the Chicago Sun-Times reports.

In a video shot on the platform of the Clark/Lake station on the city's Blue Line CTA commuter train, the white man is seen hurling abuse at the other passenger.

After eyewitnesses said the white man in a pink tank top used the N-word.

The black man begins to take his button-down shirt off.

He then removed his glasses and pursues the white man, who he punches, knocking him to the ground with his head over the edge of the platform above the tracks.

The first man then appears to walk away but someone comes up to the white man, punching him and knocking him down into the train tracks.

“Call another motherf*cker a n*gga,” someone yells. “What the f*ck is wrong with you?”

The white man is then helped to safety.

No one has filed a report about the incident and neither man has been identified.

This year's physics Nobel prize was awarded Tuesday to three men for their work on a phenomenon called quantum entanglement, which is so bizarre and unlikely that Albert Einstein was skeptical, famously calling it "spooky".

So how exactly does it work?

Loretta Lynn, America’s groundbreaking country titan whose frank lyricism delving into women’s experiences with sex, infidelity and pregnancy touched the nerve of a nation, has died. She was 90 years old.

A family statement published in US media Tuesday said the beloved songwriter died of natural causes.