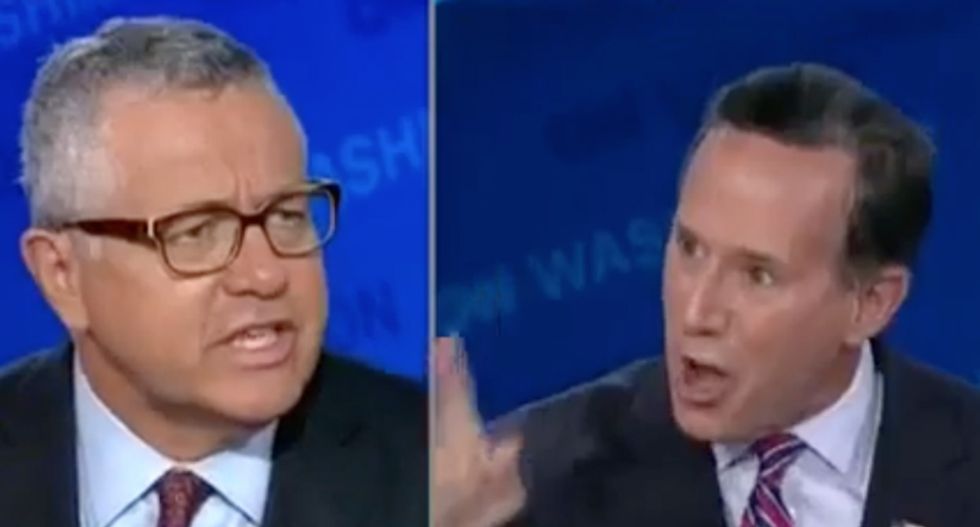 A shrieking Rick Santorum threw a major hissy fit over cupcakes on CNN on Wednesday when Jeffrey Toobin questioned whether abortion rights and gay rights would be endangered by a conservative majority on the Supreme Court.

Toobin pointed to Kennedy's role as a swing vote in preserving abortion rights and affirmative action. "That is why and that is only why Roe v. Wade has survived as the law of the land, because Anthony Kennedy was on the court," said Toobin. "Will Roe v. Wade survive? Will universities be allowed to use race in admissions? May bakers and other small business owners say to gay people, 'you're not allowed in here' and the court says that's okay?"

Santorum, who is notoriously hostile to the LGBTQ community and once compared gay intimate relations to bestiality, immediately began interrupting and yelling, "the idea that there's a contention that bakers don't allow gay people in their shops, that's never been the issue and it's not the issue."

Toobin shot back, "Oh, they can go in, they just can't buy anything," as Santorum continued to talk over him about how baking a cake "for a ceremony that violates their religious tenets" was "a fundamentally different thing than walking in the door" and that "no one is saying you can't walk in and buy a cupcake."

Toobin again replied "so there are some products gay people can buy and some products they can't," which only seemed to make Santorum, who accused Toobin of "being an extremist", more agitated.

"Rick, you keep saying these cases are so easy," Toobin said, smacking him down. "Watch what happens. Watch how gay people are being denied service."