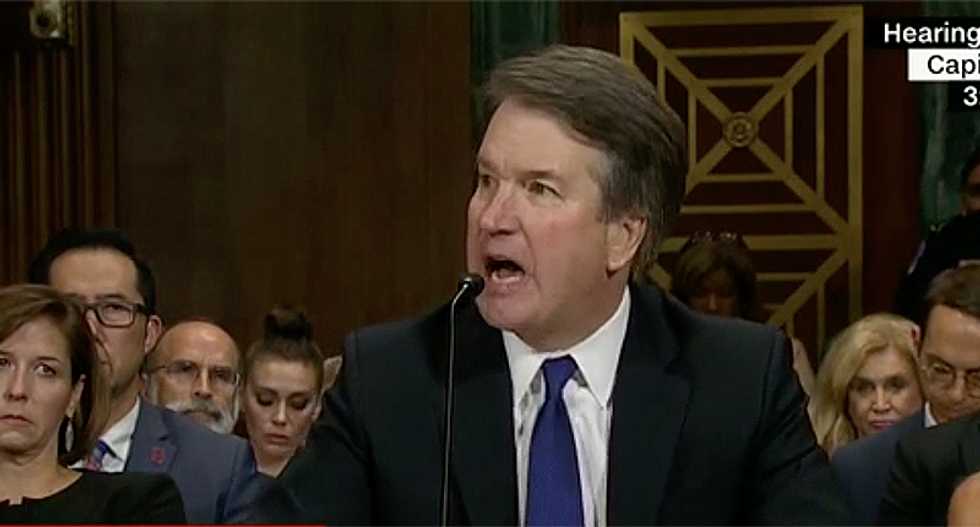 Judge Brett Kavanaugh on Thursday continued to deny allegations of sexual predation despite more women coming forward to report a pattern of sexual misconduct stretching from the early 1990's until the late 1990's.

The internet, however, was unimpressed with his denials.

Here are some of the most newsworthy statements of analysis of his testimony.

Ahhh hes almost crying while yelling. Clearly this man has rarely faced a problem on his own. #KavanaughHearings
— Kathleen Madigan (@Kathleen Madigan)1538076026.0

Can you imagine if Dr. Ford had been shouting and belligerent and crying? #KavanaughHearings
— Shannon Watts (@Shannon Watts)1538076354.0

This “due process” and “corroboration” arguments are such bs. If he really wanted due process and was open to corro… https://t.co/0KTQr5aXyG
— Jonathan Alter (@Jonathan Alter)1538076251.0

Wow. My concern with him was always that he was more political operative who happened to be a lawyer. That opening statement confirmed that.
— John Weaver (@John Weaver)1538076297.0

Not entirely sure that Kavanaugh’s raging meltdown on national TV is the best answer to a heartbreaking yet poised… https://t.co/5tTWBAAYU7
— Paul Begala (@Paul Begala)1538076192.0

#Kavanaugh is crying over his yearbook. The yearbook where he and other boys humiliated a young woman, insinuating… https://t.co/BXi2QIfRJw
— The Advocate (@The Advocate)1538077457.0