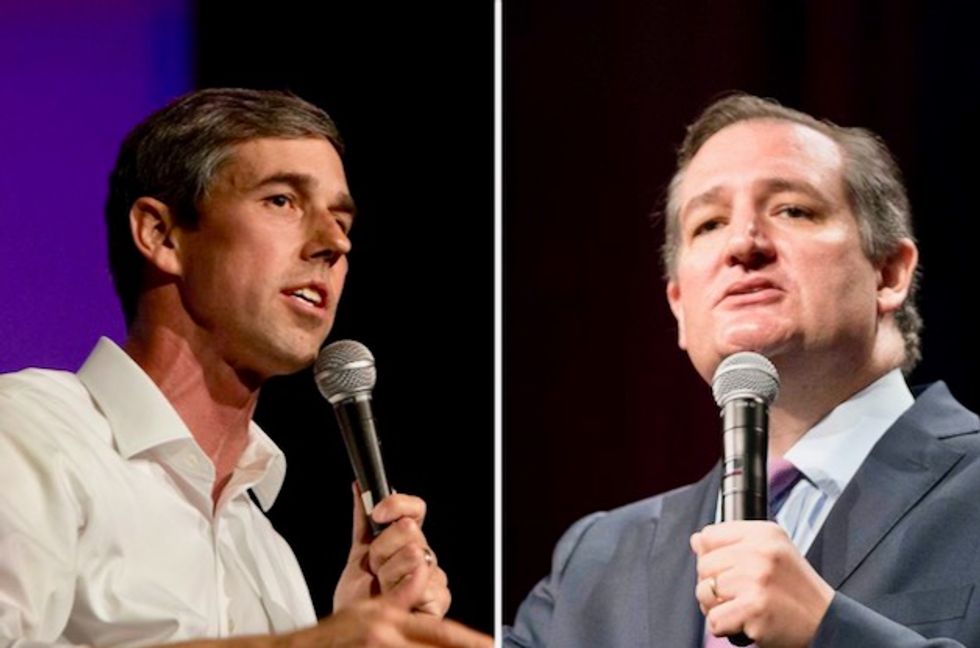 Allies of U.S. Sen. Ted Cruz, R-Texas, are targeting his Democratic opponent, Beto O’Rourke, in a new TV ad over his support on the El Paso City Council for a plan to redevelop downtown El Paso that raised the threat of eminent domain.

The plan never went that far but fueled a contentious chapter in El Paso politics starting over a decade ago. The new TV ad from the Club for Growth — a national conservative group that recently announced a seven-figure offensive in the race — portrays O’Rourke as a puppet of wealthy developers who pushed the project, including his father-in-law, Bill Sanders.

“El Paso’s rich and powerful stay that way by controlling politicians like Beto O’Rourke,” a narrator says in the 30-second spot. “As a councilman, Beto carried water for his wealthy father-in-law, the developer behind a downtown redevelopment scheme, pushing the city to bulldoze an historic Hispanic neighborhood using eminent domain."

The ad goes on to refer to eminent domain as a “government wrecking ball” and ends by tagging O’Rourke as “Beto the Bully.”

The O'Rourke campaign did not have an immediate comment on the ad.

Titled “Bulldozer,” the spot starts airing Tuesday in San Antonio, and the Club for Growth plans to also run it in Dallas and Houston in the coming weeks. The group's super PAC arm, Club for Growth Action, is spending $200,000 on the ad for now. The commercial is part of an at least $1 million investment in the race that the organization announced last month, seeing a tightening race between O’Rourke and Cruz, on whom it spent lavishly in 2012.

The Club for Growth commercial involves an episode that has come up in O'Rourke's previous races for City Council and Congress but not in the Senate contest until recently. The downtown revitalization plan was introduced in March 2006 by the Paso Del Norte Group —a private organization made up of regional business elite including Sanders — and would have impacted the historic Mexican-American neighborhood of Segundo Barrio.

While eminent domain was never used in conjunction with the project, the specter of it was controversial from the start. O’Rourke was among those on the council who at least initially wanted to preserve the option of eminent domain as a last resort and, for example, helped defeat a June 2006 motion to rule it out. A month later, as public concerns were growing about the plan, the council — including O’Rourke — voted to ban the use of eminent domain during the first year of the project.

Sanders initially said in April 2006 that he would not invest in the project to avoid creating an ethical dilemma for his son-in-law, according to El Paso Times articles from the time. Later in the year, however, he decided to invest in the plan after all, citing encouragement he received from then-Mayor John Cook, and promised any dividends would go to a downtown nonprofit.

O’Rourke appeared to cite that promise in denying there was any conflict of interest. Sanders “cannot profit from this plan, nor can I, nor can any member of my family,” O’Rourke wrote in an email to the Texas Observer for a 2007 story on the project titled, “Eminent Disaster.”

Still, opponents of the plan hounded O’Rourke as the council grappled with the issue in 2006. There was the threat of a recall petition — the signatures were never turned in — and two ethics complaints filed against O’Rourke, both of which were ultimately dismissed, the El Paso Times reported.

O’Rourke went on to easily win re-election the council in 2007, defeating a challenger who had made the project an issue. It came up again in his successful 2012 bid to defeat then-U.S. Rep. Silvestre Reyes, D-El Paso, whose campaign raised the potential destruction of Segundo Barrio homes in an attack ad against O’Rourke.

By the end of the decade, the plan — at least as initially conceived — had lost steam. The issue was further complicated in 2009 when Texas voters approved a constitutional amendment tightening eminent domain rules in the state.

In O’Rourke’s race against Cruz, the line of attack involving eminent domain is relatively new. Before Tuesday's ad, it was only included on a long list of O’Rourke hits featured on a website launched last week by Texans Are, another pro-Cruz super PAC.

On the campaign trail, O’Rourke often talks about eminent domain in the context of his opposition to President Donald Trump’s proposed wall along the U.S.-Mexico border. Last year, O’Rourke introduced a bill to ban eminent domain for the purpose of the wall.

Cruz supports the wall, though he does not talk much about the use of eminent domain to construct it. Some other top Texas Republicans, such as Attorney General Ken Paxton, have said they are OK with eminent domain for the wall.

In addition to Club for Growth, Texans Are is planning to spend into the seven figures on the race and its first TV ads hit the air Tuesday. One of them, seen on air in San Antonio, attacks O'Rourke over his record on border security and immigration.