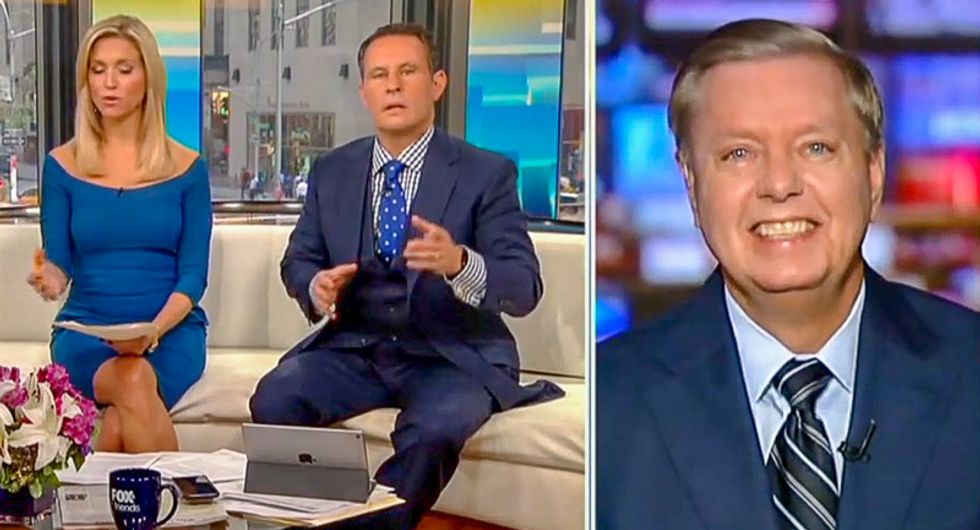 Sen. Lindsey Graham (R-SC) on Thursday laughed at the details of an alleged gang rape that has been linked to Supremme Court nominee Brett Kavanaugh.

Less than two hours before Dr. Christine Blasey Ford was set to testify about her allegations against Kavanaugh, Graham attacked another women, Julie Swetnick, who says that the nominee was present when a "train" of men raped her.

"[Swetnick] wants me to believe that when Brett Kavanaugh, when he was a sophomore or junior, maybe early in his senior year in high school, orchestrated mass rapes, drugged women," Graham told Fox & Friends. "And she went to not one party where this happened, but 10 parties, never told anybody about it."

"Why would you go back to the second party if the first experience was that women were being drugged and raped?" he insisted. "And here's the thing that seals it for me. Kavanaugh says, 'I don't even know who she is, I've never met her.' So, I believe him!"

"She was college age going back to high school parties," Earhardt said, causing Graham to laugh out loud. "If there were 10 of them, why didn't -- why aren't any of them coming forward, why didn't she go to police?"

"Why would you go back to 10 parties?" Graham exclaimed, once again laughing. "It's crazy."