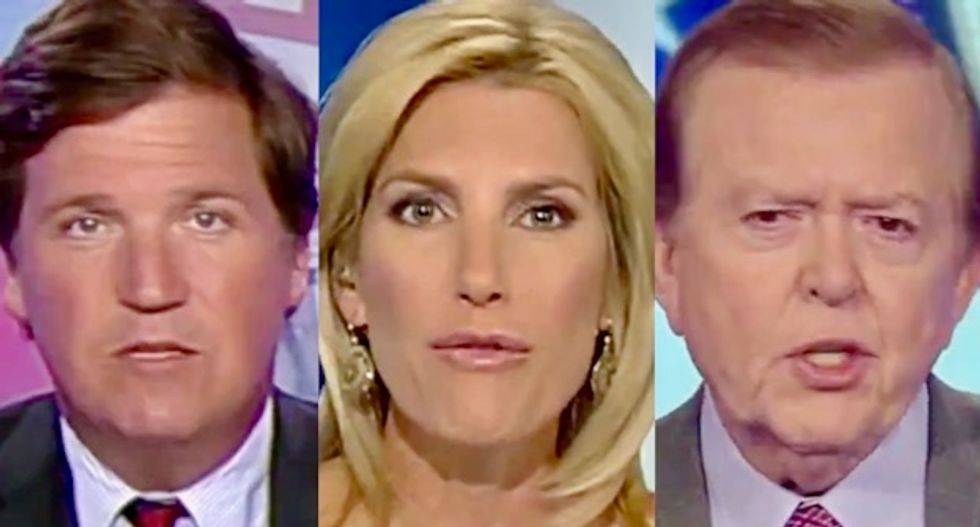 Imagine if you listened to Fox News all the time. When you're having your morning coffee. Driving to work. Getting alerts on your phone during the day. Maybe you catch a few minutes on TV during your lunch hour. You see Fox News tweets on your break. And you listen on your way home, when you're stuck in traffic. Maybe you watch a few more minutes at the gym. Or when you're visiting a neighbor or friend, and the TV just happens to be tuned to the Fox New channel.

Oh, and they're going to help Democrats overthrow the U.S. government.

John Kerr from Media Matters just put together this compilation of Fox News hosts and their GOP operatives obsessing (aka, lying) about immigration. It's a good slice of what your friends, co-workers, neighbors, and family members who watch the conservative cable news outlet are hearing all the time.

Yes, the "caravan" of 3000 or 4000 immigrants from Honduras, are seeking asylum because they live in such horrific poverty and violence that the country was (until recently) literally named the murder capital of the world.

"An organized effort to crush or rush the border, right before the midterm elections," Laura Ingraham fear-mongers, later asking if they'll "be stopped, ever?"

"Criminals mixed in with these families."

"Democrats," Laura Ingraham screams, then pauses for effect, "want to abolish ICE." They also "want to replace you, the American voters, with newly-amnestied citizens, and an ever-increasing number of chain migrants."

"They're going to tell you it's about civil rights or some other principle they pretend to care about," Tucker Carlson claims, "but they're lying. It's about seizing power, and holding it. That's their only aim – they're deadly serious about it. While you were grilling in the backyard last night, they were plotting, in effect, a coup."

And just to be clear, it's not true.

Immigrants, including those in the country illegally, (which is a misdemeanor), commit crimes at a far lower rate than U.S. citizens – especially those whose families have been here for generations.

Democrats do not want open borders, more crime, or more drugs – although the majority of the country supports the legalization of marijuana. They don't want to replace anyone (except, perhaps, the current occupant in the White House, snd the GOP in Congress.) Few Democrats want to abolish ICE – although many want the agency cleaned up.

Democrats are not – repeat, not – plotting a coup. Republicans, on the other hand, effectively are – since they are doing everything in their power to take away the right to vote.

Sorry, Tucker, Laura, Lou, Newt, Sean, and all the other propagandists at Fox News. You're wrong, and America is going to prove it to you on November 6.