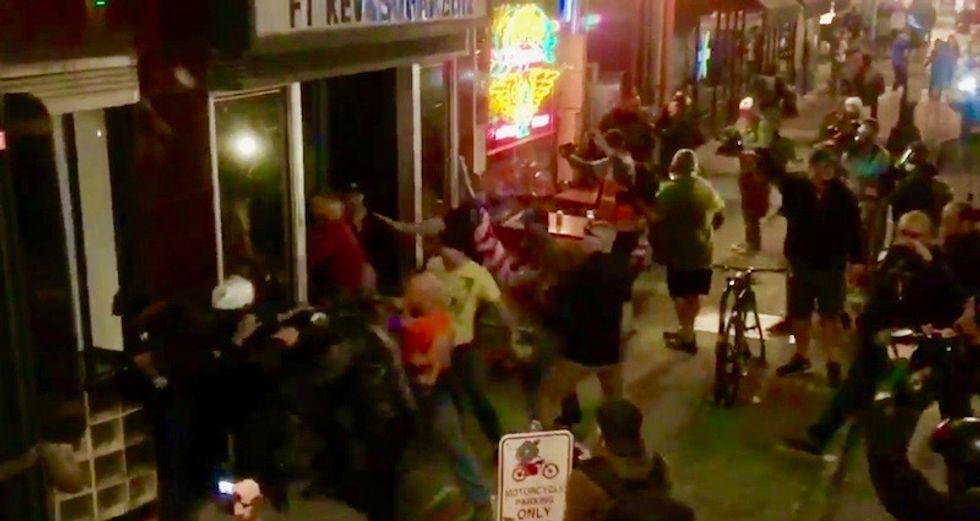 A brawl on the streets of Portland, Oregon/Screenshot

A rightwing march in Portland, Oregon descended into a street brawl on Saturday night.

The city has been in the spotlight over the last week after a peaceful protest over a police killing of a black man was disrupted by a white driver who flipped off the protesters, made an illegal turn and sped through the crowd of protestors as they banged on his car windows.

According to the Oregonian, a "Law and Order" March organized by Portland-area rightwing groups angry about the white driver's treatment by Black Lives Matter protestors turned into what reporters described as a "huge bloody brawl" with head-stomping, bear-spray, batons and many punches thrown.

Freelance journalist Mike Bivins got footage of a vicious fight in front of the city's oldest bar, which started for unclear reasons and involved upwards of 50 people.

According to a local weekly newspaper, "several brutal fights broke out at once, with black-clad leftists swinging at their MAGA-hat wearing adversaries."

In one disturbing clip, a man violently stomps on the head of another man

Watch video of the melee below.

At the end of the fight, a man danced in the streets as onlookers gawked.