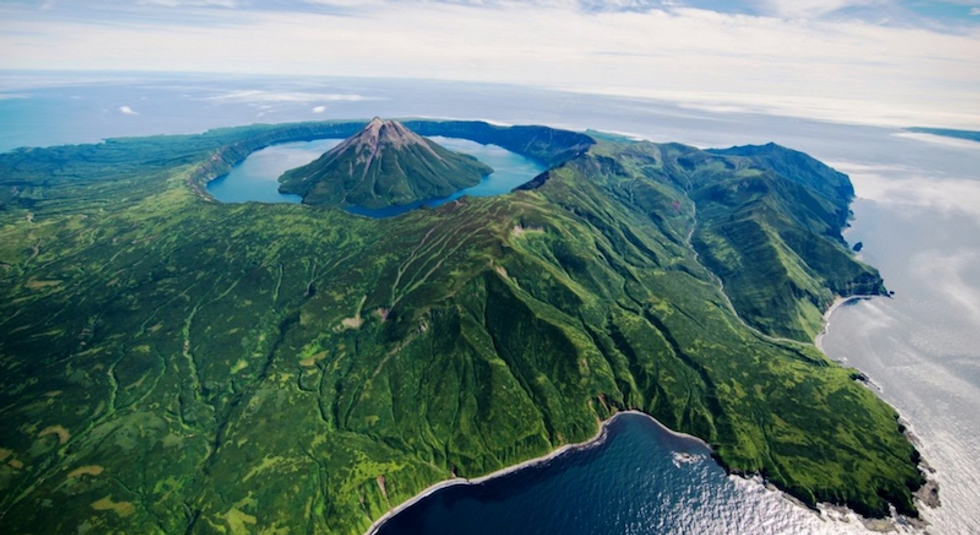 One of the disputed Kuril Islands/Screenshot

At gunpoint, her father shielded his daughters at their home on an island north of Japan's Hokkaido.

"Only after you kill me!" he screamed at the soldiers, who left without harming the family.

"I thought we would all die," Hasegawa tells AFP.

Nevertheless, Hasegawa, then 13, now 86, has fond memories of her home on the island of Etorofu, off the northern coast of Japan, one of the Kuril islands invaded by the Soviet Union at the end of the war.

Four of the islands known as the Northern Territories in Japan and the southern Kuril islands in Russia are disputed and remain a bitter sticking point between Tokyo and Moscow, preventing them from signing a formal peace treaty.

Now, former residents who were children when the Soviet troops arrived are heading into their twilight years with little expectation of returning to their former home.

More than 60 percent of the 17,000 former islanders have already died and the average age of those still alive is 83.

Now, former residents who were children when the Soviet troops arrived are heading into their twilight years with little expectation of returning to their former home.

More than 60 percent of the 17,000 former islanders have already died and the average age of those still alive is 83.

Big men I've never seen before, carrying machine guns, came into our house, ransacking rooms... I was frozen with terror," he recalls.

The four-year-old Waki later became friends with Russian children, who came with families after the invasion.

But the friendships came to an abrupt end three years later, when hundreds of Japanese residents were expelled, some gathered inside a fishing net with a wooden bottom and hoisted onto a cargo ship.

In recent months, diplomatic efforts to resolve the issue appear to have accelerated.

Tokyo rejected the proposal, but Japan's Prime Minister Shinzo Abe is expected to meet with Putin again later this year.

Historically, Japan insists the islands, which were once inhabited by the Ainu indigenous people, have never belonged to anyone else.

Russia considers them spoils of war as agreed between then US president Franklin Roosevelt and Soviet leader Joseph Stalin in 1945.

Strategically, control of the islands gives Russia year-round access to the Pacific Ocean for its Pacific Fleet of warships and submarines based in Vladivostok, as the surrounding water doesn't freeze in winter.

"Too little time is left," says Masatoshi Ishigaki, mayor of Nemuro City, on the eastern tip of Japan's Hokkaido, just a few kilometres from two of the islands.

In 1956, Moscow offered to Tokyo the two smallest islands, Shikotan and Habomai, in exchange for a peace treaty, an offer that went nowhere.

But Ishigaki says people in Nemuro would now accept that offer, and even a partial return of the islands would bring "great benefits".

This process is already under way in a limited fashion, with some former residents allowed back to visit family tombs, and Russians coming to Japanese towns under an exchange program.

Japan and Russia are also negotiating economic projects on the islands in areas such as fishing, farming, wind-generated energy, and tourism but the details are yet to be worked out.

But Minatoya is skeptical that the economic projects are the best way to solve the problem.

"Would you accept it when someone you don't trust says, 'here's a big present for you, please take this'?" he asks.

On the other side of the strait, there is little appetite to return the islands.

"It is not likely that economic projects will enable Japan to retake control of the islands," said Alexander Gabuev, director of the Asia-Pacific Program at the Carnegie Moscow Center think-tank.

"The Russian position is firm: the Kurils are Russian," he told AFP.

Until the deadlock is broken, Hasegawa has only the memories of her home island, known as Iturup in Russian, from where a Japanese carrier fleet departed to attack Pearl Harbor in 1941.

She remembers riding a horse on the beach, her family felling trees and pulling the logs home on a horse sled. She remembers the bitter cold and how they would put a brick on a stove, then wrap it in a towel to warm their bed.

Waki now lives in Rausu, around 25 kilometres from his hometown of Kunashiri, known in Russian as Kunashir, which is visible on a clear day.