Georgia voter: If African-Americans are being disenfranchised it's because they're too dumb to follow directions 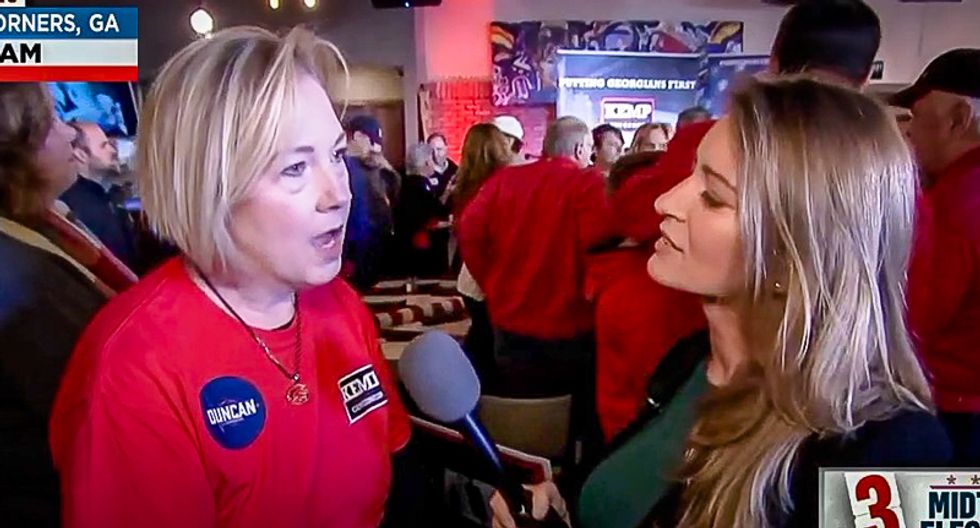 A Georgia voter suggested to MSNBC over the weekend that if African-Americans were being disenfranchised in the 2018 midterms it is because they are "unable to follow instructions."

At a Saturday event for Georgia gubernatorial candidate Brian Kemp (R), MSNBC's Katy Tur spoke to a woman named Rachel who said that she supported Republican candidates because they have made the state friendly for businesses.

Tur pointed out to Rachel that alleged voter suppression in Georgia had become a national issue.

"Are you worried that it's damaged the perception of this state?" Tur asked the Republican voter.

"I live in Gwinnett County and it's sort of been ground zero for some of that," Rachel remarked. "I am very close to the Gwinnett elections board. I have watched how they process things. There is no doubt in my mind -- number one -- everyone that's eligible to vote should be able to vote."

"Brian Kemp does not want anyone to not vote," the woman insisted.

According to Rachel, Kemp was following the law by enforcing a rule that disenfranchises voters if they fail to sign their name with an "exact match" to the signature on voter rolls.

"Are you concerned that it affects more African-American voters than it affects white voters?" Tur wondered.

"If it affects anyone, it would affect everyone," Rachel opined, ignoring the statistics.

"I think it's 70 percent-or-so African-Americans are affected [disproportionally] by an exact match," Tur explained.

"I don't know why you would think that," Rachel shot back.

"No, that's what the statistics show," the MSNBC correspondent advised.

"What I think you are suggesting is that African-American voters are unable to follow instructions," Rachel said before being interrupted by Tur.

"It's not what I'm suggesting, it's what the statistics show," Tur said again.

"No one will be turned away," Rachel promised, noting that African-Americans could vote with a provisional ballot if they are disenfranchised by the state's signature match law.