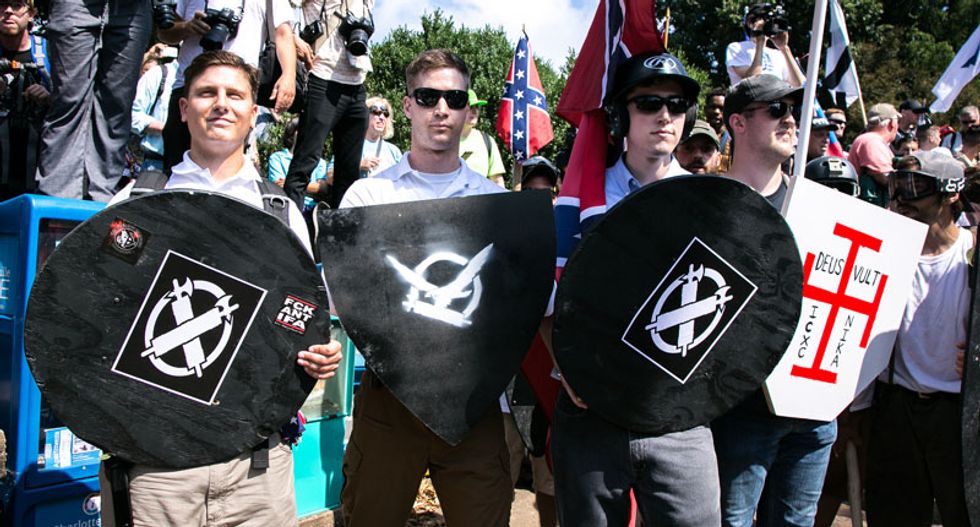 Members of a neo-Nazi group pose with shields during 'Unite the Right' rally in Charlottesville. (Karla Cote/Flickr)

Events in Charlottesville in 2017 cascaded into domestic terrorism. Three dead and dozens wounded as neo-Nazis, white supremacists, and other “alt-right” members descended upon the university that Thomas Jefferson built; their purpose, it is alleged, to defend a statue – a monument – to the Confederate Civil War soldier, General Robert E. Lee. These radical rightists arrived from all across the United States upon the college town of Charlottesville to protect, in their words, their “white” heritage. Among the many problems I have with so-called “white supremacists” is their purposeful mixing of “heritage” with “history,” rhetorically pining for a once proud “white” America.

But history proves that America was never white.

That I need to make this statement, and worse, that some may take offense from it, shows the blurring rhetoric between what is Heritage and what is History. I’ll return to this later. For now, some History.

The first successful colonial holding in these current United States was Spanish, at St. Augustine, Florida, established 1565, four decades plus prior to Virginia’s Jamestown.

Speaking of Jamestown, the first Africans were brought into Virginia on a Dutch trading ship in 1619, a year before Pilgrims landed in Plymouth Rock, Massachusetts.

And nearly half of those Pilgrims could not speak English. Of the near half that couldn’t, most spoke Dutch, with a scattering of German and French. America from the get go was not an English-speaking nation. When the Puritan, William Bradford, arranged the first Indian Treaty signing in 1621, it was with Massasoit, a Pokanoket of the Wampanoag Confederacy. At this time, depending on which archeologist you ask, the native population of North America was anywhere between 8 to 20 million. English speakers? Less than a thousand.

And it was the Dutch who seemed ascendant, as they settled New Amsterdam and the Hudson River Valley beginning in 1625. English-speaking America was in the minority of the European languages spoken by 1670. The French were firmly in place along the St. Lawrence River and the Great Lakes region, and it may come as some surprise to many Americans, but Green Bay, Wisconsin was once “La Baye des Puants” which is what the French called it when they founded “The Bay of Stinks” in 1634. Spain still reigned in Florida and along the Gulf Coast. Even the Swedes set up shop along the Delaware River taking up large swaths of what is today Delaware and Pennsylvania.

And if you were around in the mid-eighteenth century, don’t ask Benjamin Franklin about the indentured Palatines. In 1751 Franklin penned, “Observations Concerning the Increase of Mankind, Peopling of Countries, etc.” where he openly called German-speakers “swarthy” and “stupid,” that they would likely “Germanize us instead of our Anglifying them” unless there was a change to immigration policies.

Of course, one of the more famous eighteenth-century colonial wars, the French and Indian War, lasted nine years, and only after victory was secured in 1763, did English speakers become dominant among the many European powers that settled North America.

Back to Africans, according to SlaveVoyages.org, the activities of the Atlantic slave trade brought 9,507 Africans to mainland America by 1699. Over the next 75-years, or a year before the United States declared its Independence, another 220,000 were brought to slave upon the American mainland. The 1790 census (the first undertaken by the United States) proved 740,054 Africans in America, or 26.5% of the population just a year after the Constitution was ratified.

And the Revolutionary War was not white on white violence, or English speakers against Mother England. There was the famed Ethiopian Brigade, which General George Washington did his best to avoid. Yes, blacks fought on both sides of the war. And Crispus Attucks was black and he was the first to die at the Boston Massacre of 1770. Indians, too, fought in this war, forced to take sides by both British and colonial forces.

Even when the nation was young, and found a bargain from Napoleon to purchase all of Louisiana – yes, we gained the entire Mississippi River watershed, but since France had only just won Louisiana, a trophy for defeating Spain in Europe, and unable to hold on to Haiti in the Caribbean where slaves successfully rebelled, America received the Midwest which was filled with the indigenous mostly, and some Spaniards too.

Equally, the war of 1812, which once again pitted the United States against Britain, was not wholly a white on white conflict. Again, Native Americans took sides, the Shawnee chief Tecumseh had formed a large multi-tribal confederacy and played an enormous role in ensuring that the young United States failed at taking Canada. The great United States Navy admiral, Oliver Hazard Perry, along with Daniel Dobbins, a shipmaster, built a fleet from greenwood on Lake Erie using African Americans to build and then man the fleet. At War’s end, at the Battle of New Orleans, General Andrew Jackson’s fighting force included Choctaw Indians, and freed blacks.

Texas, and the Mexican-American War which followed its annexation, obviously entailed the gaining of territory inhabited by Native Americans and Hispanics. When gold was all the rage in California, the world landed upon its shores. People from Europe, South America, and yes, Asia (China, in particular) descended and many remained.

In military history the 54th All Black Regiment of the Civil War, the 369th Infantry known as the “The Harlem Hellfighters” in World War One, and the all-Japanese 442th Infantry during the Second World War, still – to this day – remain some of the most wartime decorated units of our country’s fighting forces.

Which brings us to the topic of heritage and history. For this I’ll quote famed historian David Lowenthal. Author of The Heritage Crusade and the Spoils of History, Lowenthal remarks that heritage is not history at all: “it is not an inquiry into the past, but a celebration of it … a profession of faith in a past tailored to present-day purposes.”

Monuments, under this definition, are not history. Monuments are memory-makers, celebratory edifices erected to hide History’s complexity, drown curiosity, and feed the simple in the present and in the future.

If we dig past the monuments of the Robert E. Lee’s and the Stonewall Jackson’s erected in the 1920s (Jim Crow era) or the 1950s (Civil Rights era), some in far away Arizona (Arizona achieved statehood in 1912, the Civil War ended in 1865), what we get to is a place called the past where easily traceable demographics prove a country filled with ethnicities from all over the world. What the alt-right desires is an America where whites maintain some semblance of power over anyone of color if not outright ethnic cleansing. Their rhetoric of Heritage is pure myth, a fabrication of a false past, creating memory where none existed.

America was never white, and it never will be.