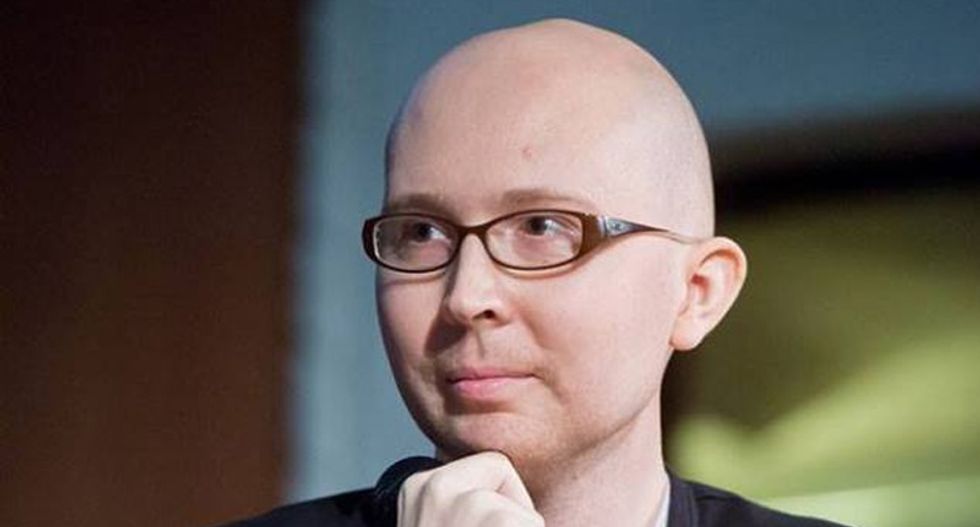 Back in 2003 or so, I put out word I was looking to hire a researcher who could find their way around the internet for a new documentary about the Iraq War, Uncovered. And into my office walked one of the tallest, skinniest, whitest – and smartest – people I had ever met.

That was my introduction Jim Gilliam. I learned he had left a lucrative career in the tech world to do something meaningful. Jim’s powerful mind, technical expertise and belief in ideas impacted and inspired everyone he came in contact with during the time we worked together.

During the making of Outfoxed: Rupert Murdoch’s War on Journalism, Jim spent countless hours researching Fox News and working with a group of volunteers called the “Newshounds.”  Their motto: “We watch Fox so you don’t have to.” We distributed the film through a combination of house party screenings in collaboration with MoveOn.org, and online DVD sales, completely bypassing the normal documentary distribution system.

When the attacks and pushback to the film began, with Bill O’Reilly and others calling me names and attempting to smear us, Jim was thrilled. “Robert,” he said, “this will get the film so much more attention!” And of course, he was right.

I remember Jim being frustrated at my lack of computer interest. He decided to personally come to my house to set up what he thought was a more appropriate, sophisticated computer and monitor for me, with actual speakers. Watching him crawl under my desk to untangle wires was quite a sight. He was undoubtedly the most overqualified installer ever.

Several years into our collaboration, illness struck Jim. He had already survived cancer, but a side effect of the treatment was that his lungs were damaged, and his breathing became increasingly labored. Eventually he could barely walk, but he would drag himself, and his oxygen tank, slowly across the office courtyard. We helped him fight to get insurance coverage for a double lung transplant. On paper, he was not a good risk. But damn, they didn’t know this guy’s heart and soul, or his courage. With a combination of carrot, stick and internet outreach, the powers that be were convinced, and he was added to a waitlist for new lungs.

The wait for the transplant seemed endless, but there was never a word of complaint from Jim. His fortitude was off the charts. Eventually he got the call – and got his new lungs. And he got back to work.

So many memories stand out:

Like:  Jim walking into my office. We had just released Iraq for Sale, Jim said, “Robert, there’s this thing on the internet, we should take a clip from the film and post it. They let you post for free.”  (Back then it usually cost money to post video online.) I said, “Why would anyone watch that?” Jim said, “Let’s try it – it’s called YouTube.” I looked at the site – it was filled with cat videos and people slipping in the shower. It made no sense. But we posted, and in two days, Jim walked back into my office.  He said we had 10,000 views!  It was amazing, exciting – truly a brave new world for distribution.

Like:  In staff meetings, back when we only had three or four people – I remember someone pleading to not have Jim in the meeting because he was SO intimidating. And, well… tolerance was not his greatest quality.

Like:  Going to Washington, DC to testify on war profiteering after “Iraq for Sale” launched. The Republicans refused to allow me to show a clip of the film. Jim was, again, ecstatic. “The internet will go crazy over them censoring you.” Right again.

Eventually Jim decided to go out on his own and start NationBuilder, which was perhaps the bravest thing he ever did, given that he was an introvert and basically hated talking to people.

In 2008, I introduced Jim as he was presented with Campaign for America’s Future’s second annual Maria Leavey Tribute Award, recognizing the social justice impact of his technology work in reaching audiences directly.

In 2011, he gave his now famous talk at Personal Democracy Forum, The Internet is My Religion.

Throughout this time, Jim struggled with recurring health issues, but he continued celebrating each birthday and remained committed to living his life as fully as possible.

I never heard him complain. He always had a clear-eyed commitment to tech, to the internet, to progress.

Jim, I hate talking about you in the past tense.

I will miss you – my warrior, Brainiac friend.