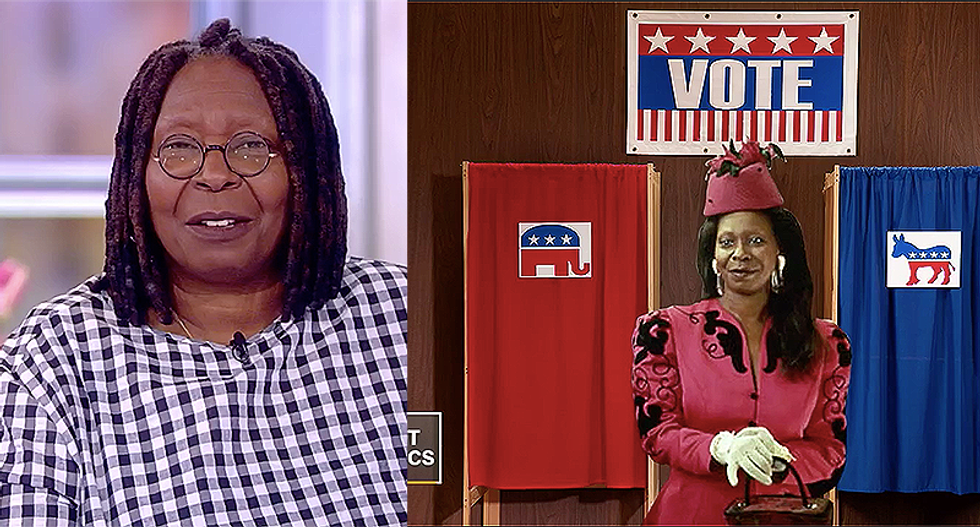 The View's Whoopi Goldberg made a mockery of President Donald Trump's latest interview claiming people change clothes and put on hats so that they can vote multiple times in the election.

"It's true," confessed co-host Joy Behar. "I voted last week as myself and I'm going to vote this week as Bette Midler."

It's unclear if the president believes that is the source of the 3 million votes cast in 2016 he called "illegal," but he's sounding the alarm nonetheless. It prompted Goldberg to show a few photos of some of her most famous characters in films voting at the polls.

"I'm so glad you said that," Goldberg replied to Behar. "Because now I know I'm not alone in my multi-voting. So, last week, this was me at the midterms, my first trip to the polls."

"The second trip, I voted a second time," she continued.

"And then, yes, I voted a third time too," Goldberg said. "Go ahead and show it."

"They let you in all three times as this?" co-host Abbey Huntsman said.

"No, I went to my car and changed my clothes," she replied.

Co-host Sunny Hostin tried to note the facts around voter fraud are so minuscule it's ridiculous.

"Forget the evidence! The man said people are changing their clothes!" Goldberg exclaimed as the audience laughed. "It's like you're like Superman, you're like, 'Let me change my clothes,'"

"But how can he lie like that without any -- without support?" Hostin asked.

Behar explained that people believe him whether it's true or not.