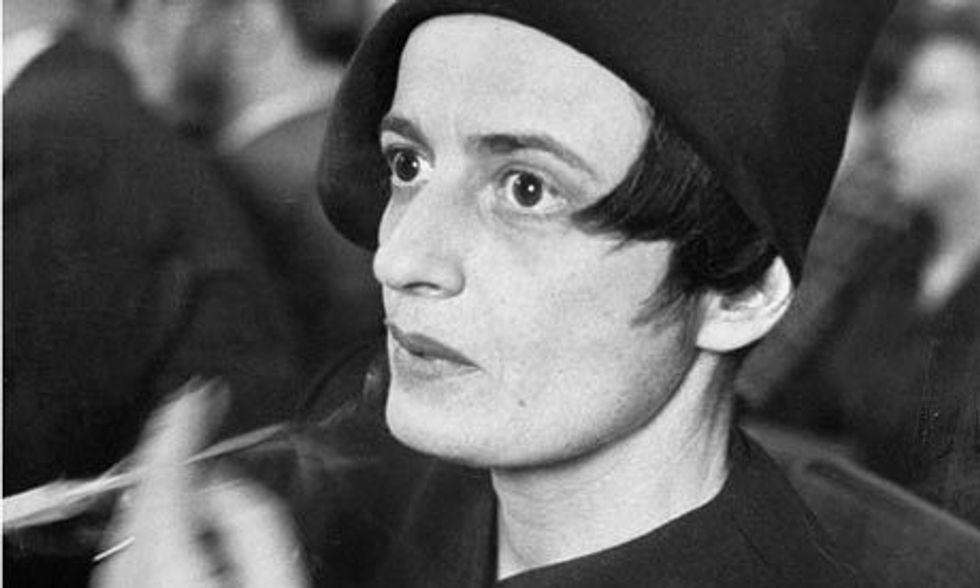 "The reason I got involved in public service, by and large, if I had to credit one thinker, one person, it would be Ayn Rand."

That's Paul Ryan talking -- statements he would eventually recant -- at a party celebrating what would have been the prolific author's 100th birthday,

Rand's books are a big driver in the long-term right-wing campaign to delude millions of people into believing that there's no such thing as society -- that everyone must look out only for themselves. Lately, Rand's work has enjoyed a major revival of interest. Besides Ryan, she's inspired yoga-wear company Lululemon to publish her quotations on its products, and she's even made inroads into the North American semi-socialist enclave of Canada.

AlterNet has kept the pace with Rand's resurgence, doing our best to educate people about what a nutcase she was and how harmful her ideas are. These 10 articles, previously published on AlterNet, shed light on why Rand's influence on Ryan is so dangerous.

1. How Ayn Rand Seduced Generations of Young Men and Helped Make the U.S. Into a Selfish, Greedy Nation

"When I was a kid," AlterNet contribuer Bruce Levine writes, "my reading included comic books and Rand’s The Fountainhead and Atlas Shrugged. There wasn’t much difference between the comic books and Rand’s novels in terms of the simplicity of the heroes. What was different was that unlike Superman or Batman, Rand made selfishness heroic, and she made caring about others weakness."

Bruce Levine's explanation of how Rand has captured the minds of so many is a must-read. "While Harriet Beecher Stowe shamed Americans about the United State’s dehumanization of African Americans and slavery, Ayn Rand removed Americans’ guilt for being selfish and uncaring about anyone except themselves. Not only did Rand make it 'moral' for the wealthy not to pay their fair share of taxes, she 'liberated' millions of other Americans from caring about the suffering of others, even the suffering of their own children."

2. Rand's Philosophy in a Nutshell

The bloggers at ThinkProgress explain that the philosophy Ayn Rand laid out in her novels and essays was, "a frightful concoction of hyper-egotism, power-worship and anarcho-capitalism. She opposed all forms of welfare, unemployment insurance, support for the poor and middle-class, regulation of industry and government provision for roads or other infrastructure. She also insisted that law enforcement, defense and the courts were the only appropriate arenas for government, and that all taxation should be purely voluntary. Her view of economics starkly divided the world into a contest between 'moochers' and 'producers,' with the small group making up the latter generally composed of the spectacularly wealthy, the successful, and the titans of industry."

3. Ayn Rand Railed Against Government Benefits, But Grabbed Social Security and Medicare When She Needed Them

AlterNet's Joshua Holland has the goods: "Her books provided wide-ranging parables of 'parasites,' 'looters' and 'moochers' using the levers of government to steal the fruits of her heroes' labor. In the real world, however, Rand herself received Social Security payments and Medicare benefits under the name of Ann O'Connor (her husband was Frank O'Connor).

4. Rand Worked on a Movie Script Glorifying the Atomic Bomb

According to author Greg Mitchell,  Rand called the nuclear weapon capable of incinerating entire cities "an eloquent example of, argument for and tribute to free enterprise."

5. Billionaires and Corporations Use Rand's Writings To Brainwash College Students

Pam Martens reported that Charles Koch, who pushes "millions of dollars through his foundation into economic programs at public universities and mandating approval of faculty and curriculum in some instances," partnered with the "southern banking giant BB&T ... mandating that Ayn Rand’s book Atlas Shrugged is taught and distributed to students."

Author Gary Weiss explains how the "Rand movement, which was little more than a cult when the Atlas Shrugged author died 30 years ago, has effectively merged with the vastly larger libertarian movement. While many differences are likely to remain ... this means that Objectivism, Rand’s quasi-religious philosophy, is going to permeate the political process more than ever before."

Author Hal Crowther writes, "For an eyewitness portrait of Ayn Rand in the flesh, in the prime of her celebrity, you can’t improve on the 'Ubermensch' chapter in Tobias Wolff’s autobiographical novel Old School.  Invited to meet with the faculty and student writers at the narrator’s boarding school, Rand arrives with an entourage of chain-smoking idolaters in black and behaves so repellently that her audience of innocents gets a life lesson in what kind of adult to avoid, and to avoid becoming. Rude, dismissive, vain and self-infatuated to the point of obtuseness — she names Atlas Shrugged as the only great American novel — Rand and her hissing chorus in black manage to alienate the entire school, even the rich board member who had admired and invited her. What strikes Wolff’s narrator most forcefully is her utter lack of charity or empathy, her transparent disgust with everything she views as disfiguring or disabling..."

Ayn Rand loved to throw around the word "parasite." If you aren't a psychopath billionaire, in Rand's eyes you're a parasite. It's a psychology totally in keeping with the myths of blue-state/red-state America, as AlterNet's Sara Robinson explains.

9. Ayn Rand Was a Big Admirer of a Serial Killer

No exaggerating here. Mark Ames writes, "Back in the late 1920s, as Ayn Rand was working out her philosophy, she became enthralled by a real-life American serial killer, William Edward Hickman, whose gruesome, sadistic dismemberment of a 12-year-old girl named Marion Parker in 1927 shocked the nation. Rand filled her early notebooks with worshipful praise of Hickman. According to biographer Jennifer Burns, author of Goddess of the Market, Rand was so smitten with Hickman that she modeled her first literary creation ... on him."

10. We've Already Had a Randian in High Office (Alan Greenspan), and It Was Devastating to the Middle Class

"The most devoted member of [Rand's] inner circle," George Monbiot writes, "was Alan Greenspan, former head of the US Federal Reserve. Among the essays he wrote for Rand were those published in a book he co-edited with her called Capitalism: The Unknown Ideal. Here, starkly explained, you'll find the philosophy he brought into government. There is no need for the regulation of business – even builders or Big Pharma – he argued, as 'the "greed" of the businessman or, more appropriately, his profit-seeking … is the unexcelled protector of the consumer.' As for bankers, their need to win the trust of their clients guarantees that they will act with honour and integrity. Unregulated capitalism, he maintains, is a 'superlatively moral system.'"