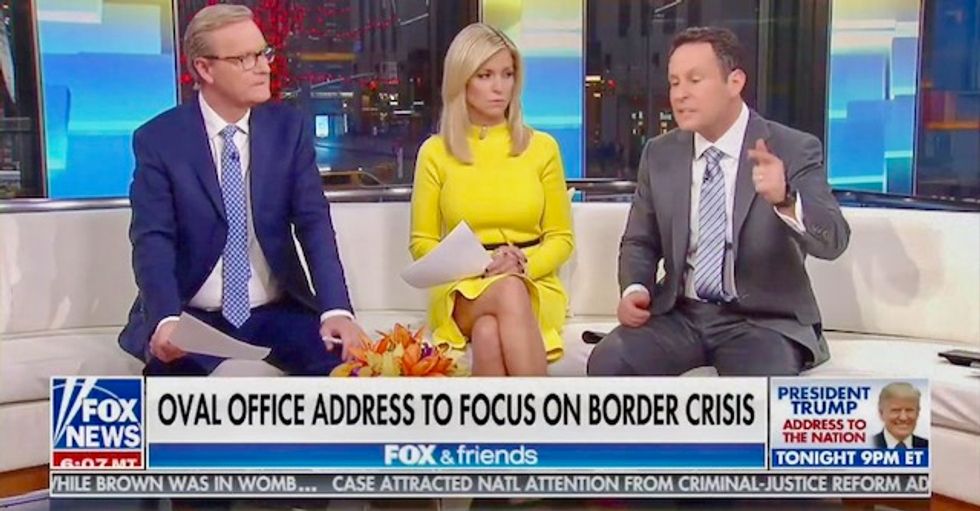 "Fox & Friends" co-host Brian Kilmeade is furious that undocumented immigrant children have been released into the U.S. by the Border Patrol and are actually attending local schools across the country, trying to learn English.

Focusing on the border wall ahead of President Trump's Tuesday night address to the nation, Kilmeade led by fear-mongering about drugs and "potential gang members making their way through," warning viewers, "there is danger."

Then he turned his focus to the migrant children.

"There’s also families and humanitarian aid that's needed at the border, and then with the catch-and-release and courts saying we've got to release these people and these kids within 20 days, they go into our school system," he complained, according to a Media Matters transcript.

"And our school system, the last time there was unaccompanied minors, they flooded into Long Island, and I want to tell you, I can't tell you how many teachers said their classroom size doubled and a lot of them don't speak any English."

There are state and federal government programs that offer funding for students who speak little or no English.

Kilmeade then concludes with this statement: "These people are now being stacked up, at the border in make-shift shelters."

It's unclear if he believes that is preferable to having the children in local classrooms.

What Kilmeade does not do is offer any solution – other than to support the President's border wall, which could cost an estimated $70 billion, and an additional $150 million annually to maintain.

Those funds could be used to improve classrooms and education in America.

Kilmeade has been accused of espousing racist views. For example, he came under fire last June for complaining that the migrant children separated from their families at the border "aren’t our kids," they "are people from another country," implying they don't deserve to be treated as well as American children.